Did a British royal and Hollywood crisis actor really team up to lend ‘stature’ to the BLM terrorist movement?! 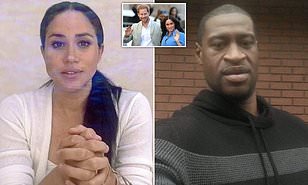 The Sussexes are turning their attention to causes related to equity and justice.

When Meghan Markle addressed George Floyd’s death during her virtual graduation speech for the class of 2020 at her former high school Immaculate Heart, she was the first member of the royal family to do so personally.

Yes, several organizations associated with the monarchy including the Queen’s Commonwealth Trust and Head’s Together had posted in solidarity with the Black Lives Matter movement, but Meghan was the only royal to put her face and her name on a statement.

Given current events, the Duchess “felt compelled to directly address and speak to these young women about what’s happening in this country right now around the killing of George Floyd⁠—as well as what’s been happening over many, many years and many, many generations to countless other black Americans,” a spokesperson for the Sussexes told Town & Country via email.

She also specifically referenced the phrase “Black lives matter,” calling on the graduating class to use the skills they’ve learned over the past four years to make the world better.

“The only wrong thing to say is to say nothing.”

“You are going to have empathy for those who don’t see the world through the same lens that you do, because with as diverse and vibrant and open minded as I know the teachings at Immaculate Heart are, I know you know that Black lives matter,” she said. (Watch her speech in full, above.)

Since then, Amelia Windsor, a model and the Queen’s first cousin twice-removed, has posted about Black Lives Matter on her Instagram account and appears to have attended a protest in Cambridge, but the Duchess of Sussex remains the most prominent royal to speak about the movement.

A core tenant of the British monarchy is its apolitical nature. As the Queen is the UK’s head of state, she and her family are tasked with remaining strictly politically neutral, but where they draw that line is complicated.

Issues of racism and police brutality should not be considered political, but unfortunately they are politicized, which is just one of the possible reasons why, despite their significant platforms, the working royals are staying quiet at this moment.

Conversely, Harry and Meghan’s choice to step back from their positions in the royal family earlier this year is perhaps what allowed Meghan to speak so candidly in the speech which, while directed at a particular, small audience, resonated widely in the larger international media. It did not need to be approved by the Palace or edited to avoid controversy.

As Dickie Arbiter, Queen Elizabeth’s former press secretary, told Newsweek: “What’s happened in the states is an absolute tragedy and it should never have happened but unfortunately it did happen. Had Meghan and Harry still been in the U.K. and working members of the royal family that speech couldn’t have happened.”

“I’m talking about the whole speech, end of. It’s highly politicized because of the very nature of what it is,” he continued. Buckingham Palace, he’s saying, wouldn’t have permitted it.

The Sussexes at Canada House in January, shortly before they announced plans to step back from their royal roles.   (WPA POOLGETTY IMAGES)

But the Sussexes’ independence from the monarchy is also what will allow them to continue to support the racial justice movement moving forward, without oversight.

Between the coronavirus pandemic and the ongoing protests against police brutality and white supremacy in the U.S., the world looks very different than it did in January when Harry and Meghan first announced their intentions to leave their working royal roles. And so they are still forging what is certainly an adjusted path forward, and have yet to publicly outline their future plans in any great detail.

But Town & Country understands that over the past few weeks the Duke and Duchess of Sussex have turned their focus toward Black Lives Matter, and plan to do more than just Meghan’s recent speech.

The couple have held meeting with leaders involved in the movement at every level: local, national, and international, and equity and justice will continue to be a priority for them in the weeks and months ahead as they prepare to officially launch their new foundation, Archewell.