From the timing of Christopher Steele’s dossier to classified leaks, the attorney general has given clear shape to the investigation of the investigators in recent weeks. 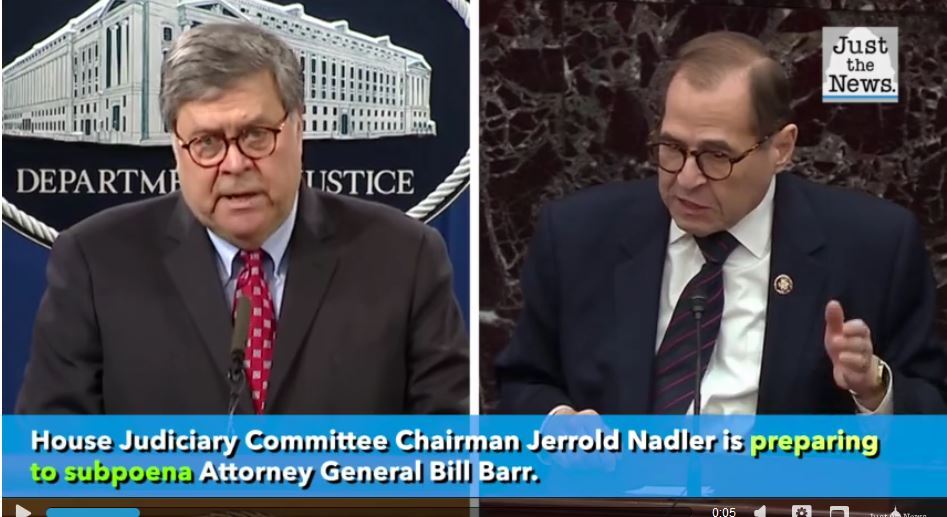 By John Solomon
Just the News

Attorney General William Barr is bringing increasing clarity to the focus of U.S. Attorney John Durham’s criminal investigation into the conduct of the Russia collusion investigators.

In a series of recent interviews, the nation’s chief enforcement officer has dropped some big hints about what is under investigation, who is and isn’t being investigated, and what evidence uncovered by the Durham team is emerging as important.

Barr also has suggested what events in the timeline are emerging as important in the 2016-17 effort to find dirt on President Trump and his campaign and transition team.

Here are the seven most important revelations Barr has made over the last month.

1. Timetable: Durham’s investigation has been slowed by the pandemic. But some action is expected by end of summer, and the probe could stretch beyond Election Day.

Barr told Fox News’ Maria Bartiromo on Sunday that the coronavirus has slowed Durham’s ability to interview witnesses and use a grand jury if needed, though he did not officially confirm there was grand jury activity in the case.

“It is a fact that there have not been grand juries in virtually all districts for a long period of time,” Barr said.

But most importantly, the attorney general laid out a likely timeline for when the first actions might be taken in the case, while stressing the probe could carry beyond the election.

“In terms of the future of Durham’s investigation, he’s pressing ahead as hard as he can, and I expect that we will have some developments, hopefully before the end of the summer,” Barr said. “But as I’ve said, his investigation will continue. It’s not going to stop because of the election. What happens after the election may depend on who wins the election.”

2. Barr believes evidence used by the FBI to justify opening an investigation into the Trump campaign’s ties to Moscow was very thin.

The attorney general has made clear in multiple interviews that Australian diplomat Alexander Downer’s meeting with Trump campaign aide George Papadopoulos at a London bar in May 2016 was a weak justification for opening Crossfire Hurricane.

Downer claimed Papadopoulos made comments about Russians possessing dirt on Hillary Clinton, and the FBI believed that was enough to predicate a counterintelligence investigation.

DOJ Inspector General Michael Horowitz agreed in his report that was enough, but found substantial evidence the FBI cheated afterwards to keep the probe going in the absence of evidence of wrongdoing.

Barr does not seem to accept the opening of the FBI probe was justified.

Papadopoulos’ alleged  “comment in a London wine bar” would be “a very slender reed to get law enforcement and intelligence agencies involved in investigating the campaign of one’s political opponent,” Barr declared Sunday.

Barr isn’t the only high-profile figure to think that. Former FBI Assistant Director for Intelligence Kevin Brock has said the FBI memo opening Crossfire Hurricane did not meet the standards for opening a counter-intelligence investigation.

3. Investigators are focused on what happened before Crossfire Hurricane officially started, including when Christopher Steele first began compiling his dossier.

In multiple interviews, Barr has made clear Durham’s team is examining what actions government officials and private individuals may have taken in the winter and spring of 2016 before the FBI officially opened its probe of the Trump campaign on July 31, 2016.

Perhaps the most tantalizing statement Barr has made on this came Sunday when he suggested it was important that Steele began working on his dossier before July 2016, raising the possibility that some unexplained events earlier that year may have been connected to that early Steele work.

“I understand why it is important to try to determine whether there was any activity before July, before the Papadopoulos wine bar conversation,” Barr explained. “And so people are looking at that. It’s significant also that the dossier was initiated before July.”

4. Barr views the FBI’s continuation of the Russia probe after the Steele dossier “collapsed” as an illegitimate effort to remove the president.

Barr has repeatedly cited the fact that the FBI continued to rely on the Steele dossier after the former MI6 agent’s primary sub-source contradicted information in the dossier in January 2017 and March 2017 — and failed to tell the FISA court about the problems with the repudiated evidence.

“The dossier pretty much collapsed at that point — and yet they continued to use it as a basis for pursuing this counterintelligence investigation,” Barr noted this past weekend.

The attorney general suggested such behavior supports arguments that what was really going on was an attempted coup to remove Trump from office. “It is the closest we have come to an organized effort to push a president out of office,” he said.

5. There are multiple criminal investigations into leaks of classified information.

Barr made clear that Durham and others are examining multiple leaks for possible criminal violations while cautioning proving leak cases can be challenging. One of those is focused on who leaked Michael Flynn’s call with the Russian ambassador.

“Leaking national defense information, unauthorized disclosure of that information is a felony,” Barr said. “We have a lot of leak investigations underway.”

6. Barr is concerned by the outgoing Obama administration’s extensive unmasking of Americans’ conversations … but don’t expect Barack Obama or Joe Biden to get in trouble.

After the recent revelation that more than three dozen Obama administration officials sought to unmask intercepted conversations of incoming Trump National Security Adviser Michael Flynn, Barr declared, “It makes you wonder what they were doing.”

“It’s unusual for an outgoing administration, high-level officials, to be unmasking very much in the days they’re preparing to leave office,” he added.

As a sign of that concern, Barr has named a U.S. attorney from Texas to assist Durham to examine the unmaskings for any illegalities.

But Barr also tamped down any expectation that the former president or vice president will be investigated, stating clearly they are not targets of the probe.

“As to President Obama and Vice President Biden, whatever their level of involvement, based on the information I have today, I don’t expect Mr. Durham’s work will lead to a criminal investigation of either man,” the attorney general said last month. “Our concern over potential criminality is focused on others.”

7. Durham is examining whether political pressures were applied during the intelligence community’s assessment of Russia’s intentions in 2016 election meddling. That could be bad news for former CIA chief John Brennan.

In the Obama administration’s final days, Brennan, outgoing DNI James Clapper and then-FBI Director James Comey release the Intelligence Community Assessment, which declared Russia  meddled in the 2016 election with hacking and Facebook ads and that Moscow’s intention was to help Trump win.

The first conclusion is widely accepted, while the second is more controversial, especially now that evidence has been declassified showing Russia was feeding derogatory disinformation about Trump to Steele. Why, experts wonder, would Russia be doing that if Putin wanted Trump to win?

Barr said Durham is investigating whether any political pressure was brought to bear to come to that second conclusion. Sources have told Just the News there is some evidence that CIA analysts and others had concerns about the strength of the evidence about Russia’s intentions.