NATO Receives US Troops from Germany, Occupation Moved to Poland

US Military Shuffle from Germany to Poland is Imminent 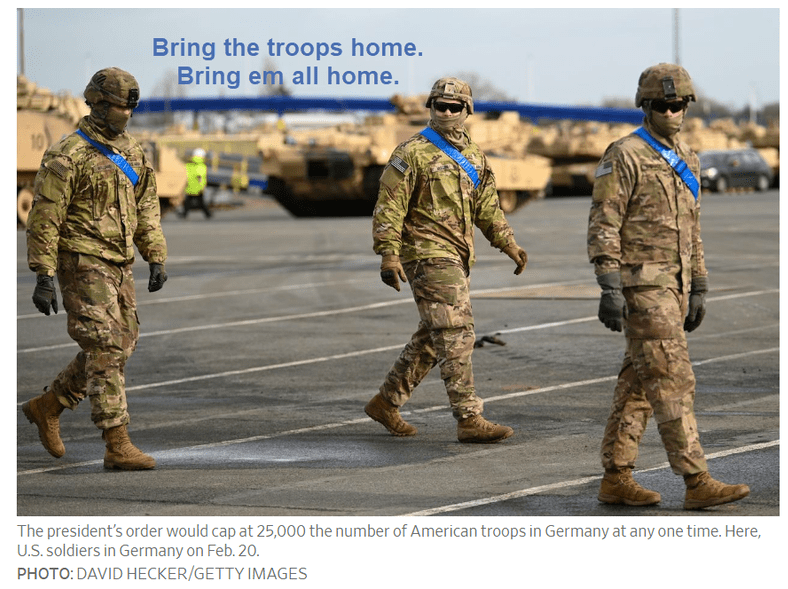 Trump is relocating 9500 US troop and lots of fighter planes from Germany to Poland.

We couldn’t quite resist this headline, but it looks that a relocation of 9500 US troops from Germany to Poland is imminent.

Robert O’Brien, the White House national security adviser admits openly that this decision is linked to Germany’s failure to meet the promise of raising defence spending to 2% of GDP by 2024, which is a Nato commitment. He writes that Germany is the world’s fourth largest economy, yet spends only 1.4% of its GDP on defence.

O’Brien also makes a link to the Nord Stream 2 pipeline project, and to Berlin’s choice of 5G telecoms provider. If this goes to Huawei, as we expect it might, the relationship with the US is set to deteriorate further.

On June 7 I commented Trump Pulls Troops From Germany, It’s a Good Start.

No Start at All

I was mistaken. This is not a start, no troops are coming home.

I am in favor of moving the troops, not from Germany to Poland, but from anywhere and everywhere back to the US.

If the EU is concerned about Russia enough to have troops, let the EU fund the troops.

Instead, of bringing the troops home, Trump is playing troop shuffleboard.

The US cannot afford to be the world’s policeman and should not try.