‘Black people don’t give a damn about statues’ — BET Founder 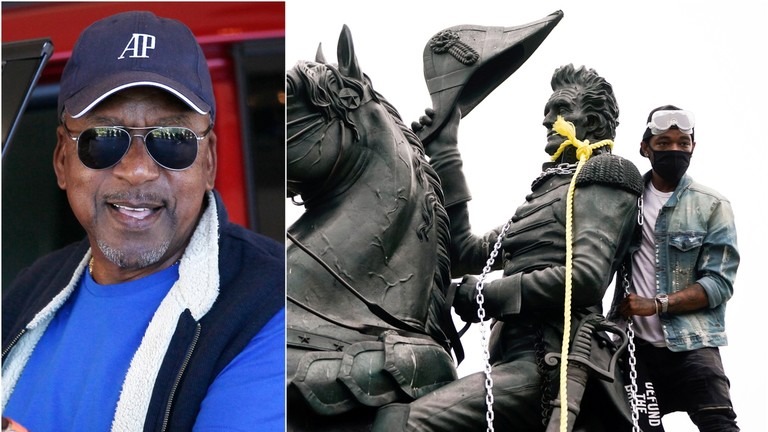 Painfully woke white people yanking TV shows off the air and tearing down statues aren’t helping the racial justice cause, according to the founder of Black Entertainment Television. He says black people “laugh at” these displays.

Removing Confederate statues does nothing for black people, billionaire TV magnate Robert Johnson told Fox News on Wednesday. “It’s not going to give a kid whose parents can’t afford college, money to go to college. It’s not going to close the labor gap…and it’s not going to take people off welfare or food stamps.”

‘It’s tantamount to rearranging deck chairs on a racial Titanic. It absolutely means nothing.’

Johnson took a similarly dim view of removing shows like “The Dukes of Hazzard” or films like “Gone with the Wind” from circulation and firing professors for saying “all lives matter” instead of “black lives matter,” suggesting these moves are “an attempt by white Americans to assuage guilt by doing things that make them feel good” and don’t help black people at all.

“Black people laugh at white people who do this,” the BET founder said, pointing out that black viewers likely made up a significant portion of the viewing audiences of the canceled shows because “they watch more TV.”

Calling performative apologetics from white celebrities on social media “the silliest expression of white privilege that exists in this country,” Johnson suggested privileged white people instead ask black people what they want and listen to their responses. “Embrace being white and do the right thing, and then you don’t have to worry about being sad because you’re white!”

“White Americans seem to think that if they just do sort of emotionally or drastic things that black people are going to say ‘Oh my god, white people love us because they took down a statue of Stonewall Jackson’,” Johnson said before repurposing a famous quote from the now-verboten Gone with the Wind: “Frankly, black people don’t give a damn.”