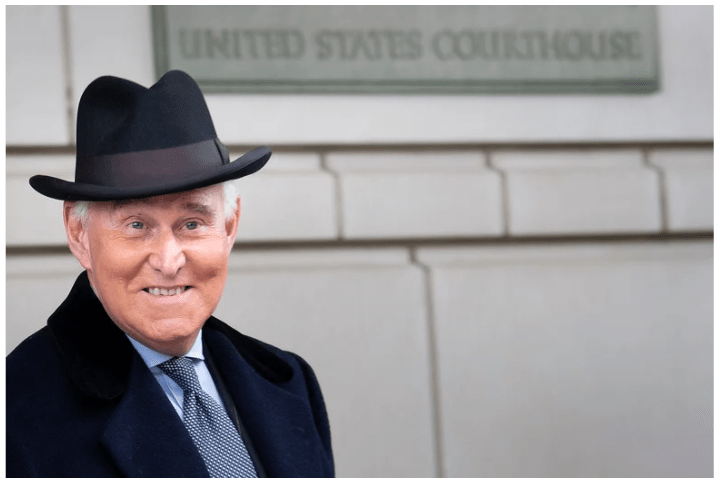 President Donald Trump left little doubt that he wants to pardon longtime ally and confidant Roger Stone a day after a federal judge set a date for him to report to serve his federal prison sentence. On Saturday morning, Trump retweeted a post by a supporter linking to an article on a far-right site that made reference to the signatures that a petition to pardon Stone has received. “It’s time to #pardonRogerStone,” reads the tweet by Lori Hendry, who describes herself as a “digital keyboard warrior” for Trump and has 342,200 followers.

Trump endorsed the call to pardon Stone a day after a federal judge gave the president’s longtime ally an additional two weeks before he has to report to serve his federal prison sentence. U.S. District Judge Amy Berman Jackson issued a ruling Friday requiring Stone to begin his three-year prison term on July 14. Stone, 67, had requested a delay to start serving his sentence until September, citing concerns over the coronavirus. He had initially been scheduled to report to a federal prison in Jesup, Georgia on Tuesday. There are no confirmed cases of COVID-19 at the prison and Jackson ordered Stone to remain confined to his home until July 14, a move that “will address the defendant’s stated medical concerns” and will also “protect the health of other inmates who share defendant’s anxiety over the potential introduction and spread of the virus at this now-unaffected facility.” Essentially, the move allows Stone time to put himself under quarantine to make sure he doesn’t take the coronavirus from his South Florida home to the prison.

Prosecutors had not raised any objections to Stone’s call to delay his prison sentence until Sept. 3, insisting that the Justice Department has followed a policy during the pandemic to grant extensions of as long as 60 days to defendants who request it, “without respect to age, health, or other COVID-19 risk factors.” Before the judge’s decision, Stone appeared on Fox Business Network on Friday and suggested officials were hiding the existence of a COVID-19 outbreak in the prison and called on the president to act. “I think this is a death sentence,” Stone said. “I don’t think I will live to see my appeal succeed, which is why I have been very forthright about my praying that the president acts.” Days earlier, The judge’s order came days after a federal prosecutor testified in a congressional hearing that top Justice Department officials had pressured government lawyers to give the longtime Trump adviser “a break” in his sentencing.

Stone was sentenced to three years and four months in prison after he was convicted for lying to Congress, tampering with a witness, and trying to obstruct an investigation by the House of Representatives on whether Trump’s presidential campaign coordinated with Russia to affect the results of the 2016 election. Trump has made clear in the past that he disagreed with the sentence and has hinted at a pardon in the past. Earlier this month, Trump tweeted that Stone was “a victim of a corrupt and illegal Witch Hunt” and added: “He can sleep well at night!”