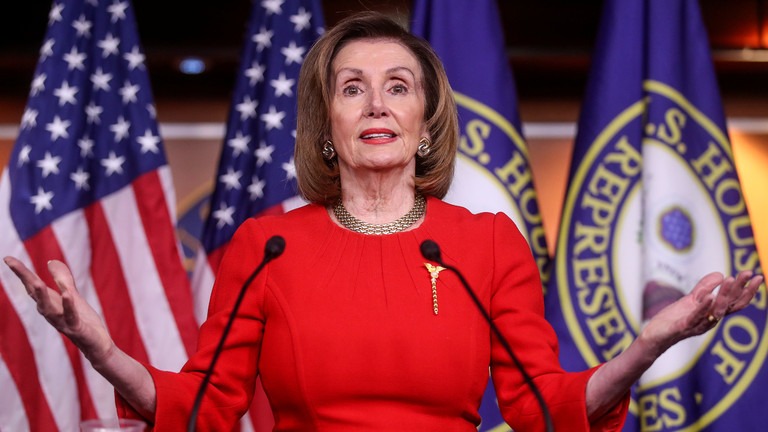 House Speaker Nancy Pelosi has refused to say when she will turn over the articles of impeachment to the Senate, hinting it could be a while – at least until the Senate’s “process” looks “fair” – and infuriating Republicans.

Pelosi declined to say when – or even if – she would deliver the articles the House approved on Wednesday night to the Senate, explaining after the vote that Democrats needed to “see what the process is on the Senate side” before they could even think of parting with the documents or naming the impeachment managers required to prosecute the case.

“So far, we haven’t seen anything that looks fair to us, so hopefully it will be fairer, and when we see what that is, we’ll send our managers,” she said, likening the relationship between President Donald Trump and Senate majority leader Mitch McConnell (who promised “total cooperation” with the White House) to a defendant “in cahoots” with the jury foreman.

The sudden foot-dragging from the congresswoman whose party has been clamoring for impeachment for most of the president’s time in office pushed some Republicans over the edge.

If House Dems refuse to send Articles of Impeachment to the Senate for trial it would be a breathtaking violation of the Constitution, an act of political cowardice, and fundamentally unfair to President @realdonaldTrump.

“Democrats have finally realized they have a very WEAK case which NEVER should have been brought forward to begin with,” Sen. Lindsey Graham (R-South Carolina) raged in a series of tweets on Thursday, warning that withholding the articles would amount to “constitutional extortion and create chaos for the presidency.” While there’s no deadline for Pelosi to present the articles of impeachment to the Senate, the trial cannot go forward without them.

Senate majority leader Mitch McConnell took a different tactic, taunting Pelosi and her party with the suggestion that “House Democrats may be too afraid to even transmit their shoddy work product to the Senate.” The Kentucky senator also complained of a “toxic” precedent the Democrats have set with their “constitutionally incoherent” articles of impeachment and warned future presidents were now open to being victimized by similar circuses.

Trump himself, less than 24 hours after being impeached on charges of “abuse of power” and “obstruction of Congress,” excoriated the ‘Do Nothing Party’, accusing Pelosi and her minions of “presidential harassment.” He agreed with McConnell, tweeting “Pelosi feels her phony impeachment HOAX is so pathetic she is afraid to present it to the Senate, which can set a date and put this whole SCAM into default if they refuse to show up.”

Some conservative commentators speculated that Pelosi was stalling for time on the advice of Harvard law professor Lawrence Tribe, as the popularity of the impeachment cratered among demographics the Democrats need to win in 2020. By sticking to complaints that the ground rules for the Senate trial are “unfair,” Democrats can pretend they’re merely waiting for a more advantageous climate to pursue a conviction.

Senate minority leader Chuck Schumer sent McConnell a lengthy wish list of demands earlier this week, including the right to call four witnesses who already refused to testify during the House inquiry and other perks the Republicans did not enjoy during those hearings, guaranteeing McConnell would refuse his terms.