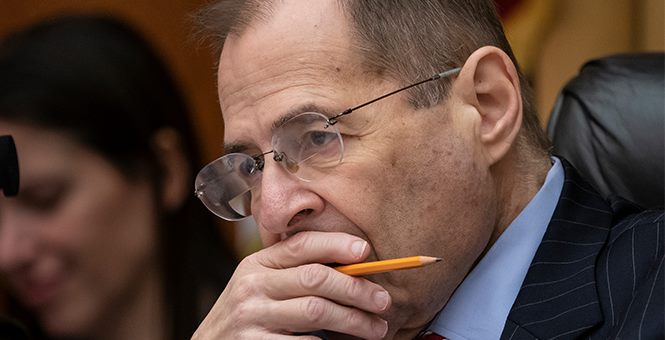 House Judiciary Chairman Jerry Nadler is still desperately continuing his quest to impeach Donald Trump. At a hearing last week in a veiled attempt to advance it, Nadler said he “no longer cared about the nomenclature.” And he told CNN “it is not necessarily called an impeachment inquiry…it is however, what we are doing.” An aggressive schedule of hearings will begin Tuesday, starting with former Trump campaign manager Corey Lewandowski.

But Nadler also has a long and disturbing history of supporting and facilitating the release of some of America’s deadliest terrorists, even including this past year.

In August of 1999, Bill Clinton offered clemency to 12 members of the notorious FALN, the Puerto Rican nationalist group that had wanted to align with Cuba. The small group, who had no popular support on the island, had set off more than 130 bombs around the U.S. between 1974 and 1983 killing six and injuring scores more. It was eventually discovered that Hillary’s advisers supported the scheme wrongly thinking it would help her gain the Puerto Rican vote in New York. The Clinton team fashioned that the terrorists sign a statement expressing remorse, but they all had refused to sign it, and then unbelievably were given a month to decide. As time was running out, both the House and Senate composed resolutions condemning Bill Clinton’s action, which they would soon pass overwhelmingly.

A day before the House vote, it was announced that 11 of the 12 who had signed the statement would be leaving numerous Federal prisons in just two days. On the day of the House debate and vote on September 9, 1999, Nadler took to the floor for six and a half minutes and defended Clinton’s action as well as the FALN itself, saying there was no proof, even though at the time four of their members had been convicted of making bombs and a fifth had been convicted of killing someone with a bomb. The group had also claimed credit for many of their attacks in communiques, including their deadliest attack at Fraunces Tavern in lower Manhattan in 1975, killing four and injuring 60, which also happens to be located in Nadler’s district since he had arrived in Congress in 1992.

Even though Nadler had approved the FALN clemencies, his involvement with aiding the release of dangerous and deadly terrorists would be even more direct and hands on, and it would involve Susan Rosenberg and Judith Clark, members of the May 19th Coalition, which was an offshoot of the Weather Underground after the Vietnam war ended. The group wanted to overthrow the government, and teamed up with Black Liberation Army (formerly Black Panthers). In 1979, they helped convicted cop killer Joanne Chesimard escape from prison, and then jointly committed a series of armored car robberies.

Rosenberg continued her major terrorist activity after her escape. She was finally caught in 1984, hauling 730 pounds of bombs and several illegal weapons, and some of the cache of bombs had been used in several bombings in New York and Washington, including one at the Capitol in 1983, which did severe damage to the historic building. In 1994, when Rosenberg was first up for parole, Nadler sent a letter to the New York Parole Board recommending her release, which they rejected. As Bill Clinton’s term was ending in 2001, Nadler made a direct pitch to him, and Rosenberg was freed in Clinton’s final 15 minutes in office that January. She now publicly praises other terrorists and murderers and also advocates for all prisons to be abolished.

And after Judith Clark had been arrested during the deadly Brinks robbery, she eventually tried every desperate attempt to gain freedom, including an escape attempt as well as suing the government for not providing her an attorney during her trial, which she had originally refused. In 2013, Governor Cuomo recommended her release to the State Parole Board, and Nadler sent a letter with other far left members of the House to the Board urging freedom, but they unanimously rejected Clark 3-0, and she then filed suit against them. And earlier this year, before the board was due to vote again, Nadler sent a another letter to them that they should release “Judy” Clark. This time the parole board, which now includes more Cuomo appointed members including one with a suspect history, controversially released Clark on a 2-1 vote.

Nadler’s history shows that he should sit in judgement of no one. His blatant hypocrisy in defending Bill Clinton during his impeachment in 1999 as opposed to his obvious bias now should easily preclude him. But what is far worse is his behavior in helping free some of America’s most dangerous terrorists.