This MSM article shows just how afraid the Telecoms are about the public catching on to 5G health dangers and medical risks.

Conspiracy theories have driven people to burn cellular equipment. Telecom workers have had to bear the brunt of this. 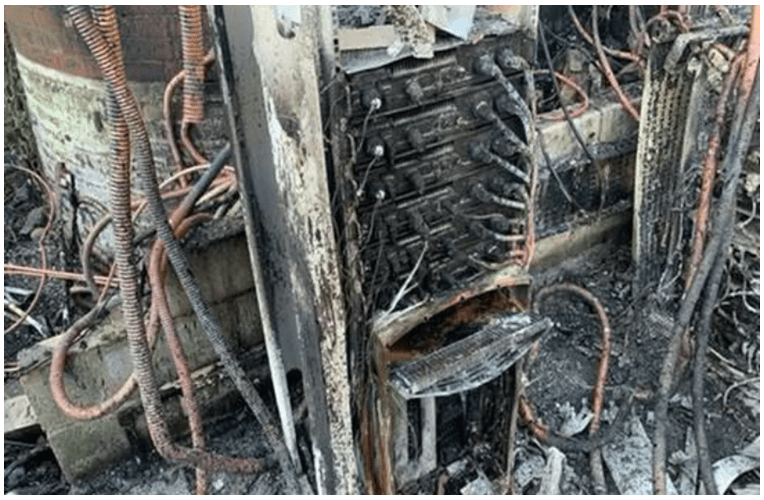 Masts have been attacked by arsonists all over the UK. (EE)

Telephone engineer David Snowdon was just returning to his van after an assignment repairing a cell site when a car sped past him, spun around and stopped right in front of him. Two men got out of the vehicle and asked him if he had anything to do with 5G masts.

“You better not be or there will be fucking trouble,” said one of the men, before kicking the door of Snowdon’s van, smacking the mirror around and walking off.

Initially, the 56-year-old from Birmingham in the UK’s Midlands region thought that what he experienced was an isolated incident. Then he did some research.

“The next day, I went onto Facebook and there it all was, this big 5G conspiracy,” he said in a phone call with CNET. “I thought, I better report this, and when I reported it to our security team, they went, ‘Yeah, there’s been quite a few.'”

By signing up, you agree to the CBS Terms of Use and acknowledge the data practices in our Privacy Policy. You may unsubscribe at any time.

Over the past four months, telecom engineers across the UK have been subjected to verbal and physical abuse, or targeted online harassment and doxxing. The US Department of Homeland Security issued a warning to carriers about potential threat to wireless equipment here. All because some people are buying into the conspiracy theory that 5G is to blame for the coronavirus pandemic, something that popped up just as the disease spread beyond China in January.

5G has been a target of conspiracy theorists for as long as it’s been around, just as with 4G and 3G before it. But what’s different this time around is that people started linking it in various ways to COVID-19, saying either that the technology weakens immune systems, or even that it’s responsible for directly transmitting the virus.

Scientists around the world are in agreement that all such claims are categorically false.

The other novel aspect of the coronavirus link was that 5G conspiracy theories, previously a fringe interest, were gaining mainstream traction in a way that had never happened before. A number of well-known celebrities jumped on the bandwagon, including Woody Harrelson and John Cusack, British rapper M.I.A. and Wiz Khalifa, tweeting about 5G.

The broader adoption of this particular theory was reflected in a wider embrace by the UK public of all sorts of coronavirus conspiracy theories. A study conducted by the University of Oxford of more than 2,500 people suggested that 25% of the British public showed at least a degree of endorsement toward coronavirus conspiracies.

According to Oxford professor of clinical psychology Daniel Freeman, who was in charge of the study, the pandemic has created “almost perfect conditions” for conspiracy theories to flourish.

“Many individuals have greater time to themselves, in isolation, and with the internet to hand,” he said. “Conspiracy beliefs will arise from the heady brew of inescapable threat, enforced change, uncertainty, isolation and social media.”

It’s easy to assume that sharing conspiracy theory posts online doesn’t have real-world consequences. But the stories that telecoms industry workers will tell you show that the fallout is real.

CNET spoke to Snowdon and several other engineers who all work for Openreach, which is responsible for the UK’s telephone lines and fiber, and who have all been harassed on the job in recent months. None has anything to do with either assembling or maintaining 5G network equipment.

Rhys, who asked us not to use his second name, was working in an underground joint box when he was verbally abused in the street. He heard a man yelling about Openreach.

“I popped my head out,” said the 26-year-old from Wales. “I was expecting somebody just to ask me a question or something. And the next thing I’m at fault for the coronavirus and causing cancer, I hope I’m happy that I could give my kids cancer, things like that.”

People at the nearby bus stop joined in with the man, he said, but eventually the bus came along and they left, leaving him to finish his job — something others weren’t able to do.

Openreach engineer Stephen Gibney, 38, was working on a job in Bristol when a woman from a nearby property confronted him. She removed one of the guardrails and threatened to damage the equipment. Gibney, along with his colleague who was working up the road at the time, felt that they had to leave the scene. Due to the woman’s threats, the police were called.

A small number of people engaging with conspiracy theories have taken it further still, committing acts of vandalism and even setting masts on fire. According to the latest figures collected by industry body Mobile UK, there have so far been 273 reported confrontations between members of the public and telecoms workers and 121 incidents of arson or sabotage this year.

Clearing up the mess

Often the first person on the scene after the fire brigade is an electrician like Liam (whose name has been changed to protect his identity). Liam works as a contractor for mobile network EE, and his job is to make sure a mast site is safe and no one coming in is going to be electrocuted. Generally when he’s called out to a site it’s because a car has driven into a piece of telecoms equipment. But recently he’s been busy acting as a first responder for some of the conspiracy-related attacks.

Watch this: Why 5G may seem underwhelming at first
17:06

The first such job Liam was called out to was in Liverpool, where he was shocked to see that someone had attempted to burn down a mast. “You could sort of see where they’d ignited the cabinets and then run the fuel across the field and then set fire to it in the distance,” he said in an interview.

Since then he’s been back to some sites that have been subject to repeated attacks several times. The worst incident was a mast in Derby that was on the verge of toppling over. “They evacuated the area and shut the roads off,” he said. “It was a real mess.”

Under usual circumstances, Liam works alone, but that’s not been the case recently. “We’ve got close personal protection people with us,” he said. “They make you feel a lot safer. You don’t know who’s lurking around and watching after they’ve done the attack.”

Phone carriers and other telecoms companies have had to take a number of precautions to protect their staff, who have continued to provide essential services while the rest of the UK has been on lockdown. Measures have included removing company signage from vans, establishing security at some sites and ensuring engineers aren’t working alone and have colleagues with them. The police, meanwhile, have made a number of arrests, but so far they’ve only resulted in one conviction.

On June 8, 47-year-old Michael Whitty was sentenced to three years in jail after he pleaded guilty to setting fire to a Vodafone mast near Liverpool, causing between £10,000 and £15,000 worth of damage. Whitty attacked the mast after reading conspiracy theories about 5G on the internet. The mast he set on fire was one of 13 that have been attacked in the Liverpool area, which accounts for just a fraction of the total number of incidents across the UK.

The attacks on masts have had a knock-on effect on communities they serve, said Emma Evans, head of network experience at O2. “Across the industry, mobile customers may have been experiencing issues with calls, texts and data following sporadic attacks on network infrastructure recently,” she said in an email.

One of the Vodafone masts attacked by arsonists was serving the NHS Nightingale Field Hospital in Birmingham, which was set up to care for COVID-19 patients.

“It’s heart-rending enough that families cannot be there at the bedside of loved ones who are critically ill,” said Vodafone CEO Nick Jeffery in a post on LinkedIn in which he begged the arsonists to stop. “It’s even more upsetting that even the small solace of a phone or video call may now be denied them because of the selfish actions of a few deluded conspiracy theorists.”

The irony of it all is that, for the most part, the 5G networks have been largely unscathed.

“Most of the time, the masts aren’t 5G,” said Evans. “Usually it’s masts that enable local residents and businesses to use our 2G, 3G and 4G networks, which have been essential during the ongoing pandemic to keep the country connected, keep vulnerable people in touch with loved ones, and allow essential services and providers to respond to those in need.”

Mobile companies tracking the incidents, as well as engineers and first responders, agree that the spate of attacks peaked in the UK around the same time that coronavirus did in April. Since then, it’s gradually quieted down, although the first responder we spoke with for this piece was on his way to another mast attack at the time of our conversation.

The telecoms engineers are aware of the drop-off in incidents too, but it doesn’t mean they’re not still on their guard.

“It makes you wonder whether you’re going to be safe to do the work,” said Gibney. “You have that in the back of your mind. Somebody just walking down the road could suddenly just turn and start shouting at you and you don’t know what they’re going to do.”

In his years working as an engineer, Rhys said he’s become used to people approaching him to ask questions, which in the past he’s always been happy to do as the interactions are usually positive experiences. But now when people approach him he’s become wary.

He tends to return to the same areas regularly, which makes him worried about encountering people who shouted abuse at him again. “That guy screaming at me now, when he sees me again doing the same thing, is he going to do something else, you know?” he said.

For Snowdon, it’s an additional stress for engineers at a time when their work is already being impacted. They haven’t been able to go into people’s houses so have had to try to solve problems from outside. Then there’s the possibility of coming into contact with the coronavirus while out on essential jobs. “It’s just another thing that we got to deal with on top of what we’re able to do at the moment.”

Things have died down a bit now, he said, but he worries that anti-5G sentiment, which is still bubbling away in certain corners of the internet, might see another uptick. “All it needs is for someone to push that theory again and off it goes,” he said.