Protestors are back to intimidate armed couple who defended their property 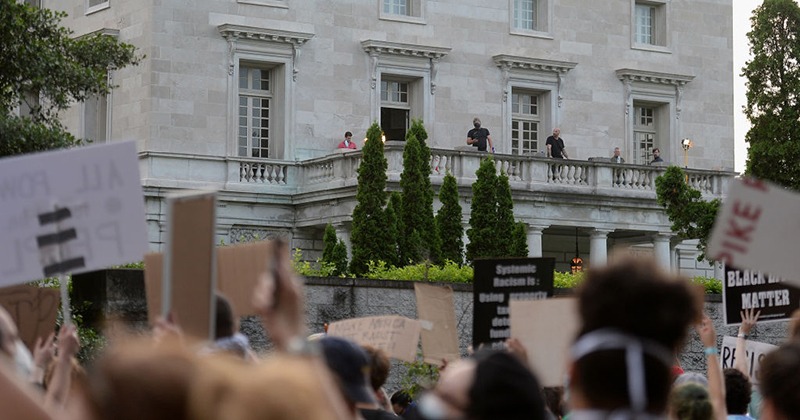 Protesting against people defending their property.

After a couple gained notoriety last week for taking up arms to defend their home in St Louis from protesters who broke into the private property, hundreds returned to the scene this past weekend, vowing that the couple shouldn’t be allowed to live in peace.

The AP reported that “Protesters marched along the busy public boulevard called Kingshighway, which intersects with Portland Place, a private street that is the site of the Renaissance palazzo-style home of Mark McCloskey, 61, and his 63-year-old wife, Patricia.”

The report notes that protesters lingered close to the McCloskeys’ house for around 15 minutes, without this time trespassing through the barriers to the private street.

The couple appear to have hired security personnel, as around a dozen ‘men in plain clothes’ were seen surrounding the property.

Mark McCloskey was interviewed by Tucker Carlson last week, telling the host that he feared for his life during the first incident.

“I was literally afraid that within seconds they would surmount the wall, and come into the house, kill us, burn the house down and everything that I had worked for and struggled for for the last 32 years,” Mr McCloskey noted.

“I saw it all going up in flames, and my life destroyed in an instant. And I did what I thought I had to do to protect my hearth, my home and my family,” he urged.

In a further interview with CNN’s Chris Cuomo, McCloskey urged that the incident represents a ‘broader horrible picture of what’s going on in America right now’.

Police are investigating last week’s incident as a case of trespassing and fourth-degree assault by intimidation, according to the St. Louis Dispatch.