There are 1,510 top-tier VIPs listed in Epstein’s little black book who will never be exposed by Ghislaine Maxwell. 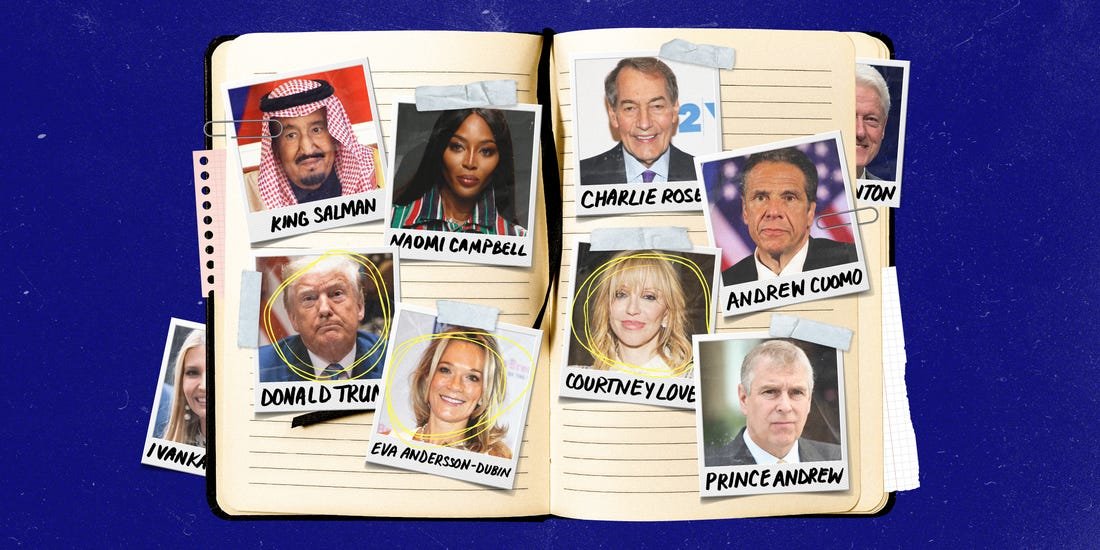 There are 1,510 people in Jeffrey Epstein’s little black book

We have a copy of the book, uncensored. As AG William Barr is now in charge, and he is moving this investigation forward despite the pressure from Epstein’s operators from one end and Epstein’s “customers” from the other end – we better let the authorities doing the job they didn’t do previously. Last week Barr and Trump fired the Manhattan prosecutor (Clinton’s friend), Geoffrey Berman. Manhattan is where Epstein’s murder case closed as “suicide”.

The black book first emerged in court after Epstein’s former property manager Alfredo Rodriguez tried to sell it for $50,000. Gawker published it in 2015.

Names in the address book likely include aspirational contacts in addition to those Epstein had met personally. Rodriguez circled three dozen entries but died before clarifying their significance.

There are more than 1,500 people listed in Jeffrey Epstein’s infamous little black book. Among them are royalty and nobility, celebrities and academics, art collectors and hedge funders, politicians and heads of state: a motley compendium of global high society.

The address book was unearthed by the FBI after Epstein’s former Palm Beach, Florida, house manager Alfredo Rodriguez attempted to sell it to an attorney representing an Epstein accuser for $50,000 in 2009. Rodriguez annotated dozens of entries — including those of Donald Trump, Les Wexner, Courtney Love, Ehud Barak, Alan Dershowitz, and two labeled “witness” – but died before he could illuminate their precise meaning.

Still, the volume is undoubtedly significant. “The FBI’s case against him makes clear that Rodriguez regarded the address book as crucial to understanding Epstein’s crimes,” Gawker’s Nick Bryant wrote, citing the 2009 affidavit of an FBI agent who interviewed Rodriguez.

In total, the book contains 1,749 entries, consisting of 1,510 people, 210 businesses, and 25 listings that we categorized as miscellaneous or unknown.

Epstein’s contacts – which likely consist of people he aspired to meet, in addition to those he knew personally — include more than 40 members of royalty and European nobility and a dozen high-ranking politicians and diplomats.

Those in Epstein’s orbit lived everywhere from Argentina to Kenya, according to the address book, but the vast majority of his associates resided in the major metropolitan centers of the US and Western Europe, with 383 entries labeled in New York — Epstein’s primary place of residence — and 363 in London, where Ghislaine Maxwell, who is accused of being his coconspirator, lived.