Why was Ghislaine Maxwell appearing at the United Nation ‘while collaborating with convicted sex-offender Jeffrey Epstein’? 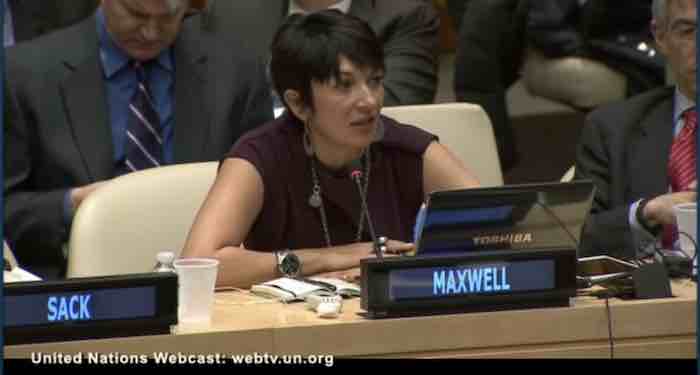 Even while collaborating with convicted sex-offender Jeffrey Epstein, it was business as usual for Ghislaine Maxwell over at the United Nations.

They called her “Gilly” at the U.N., where she successfully had the world’s largest bureaucracy issue “ocean passports” as a bogus means to “save the planet’s oceans”.  (Hear the term of endearment for yourself by clicking on video below).

High-flying Gilly, in the slammer since July 2, where she has no bed sheets and must wear paper clothes, for suicide prevention, rubbed shoulders with the rich and famous among the media-dubbed ‘beautiful people’.

Gilly fits the perfect description of what folk would call “A woman of privilege”.

Now her lawyers—citing concerns over COVID-19—are pushing for a $5 million bail bond and home confinement, want her out of jail.

“Maxwell’s lawyers filed a memo Friday with the court opposing the government’s motion for detention. They claim health risks associated with coronavirus and a $5 million bond should be enough to let Maxwell wait out her trial at home. (Fox News, July 10, 2020)

“She is facing six charges for conspiring with Epstein in a multi-state sex trafficking ring involving three unnamed minors between 1991 and 1997.

“If convicted, she would face 35 years in prison.”

Being released from jail and awaiting trial at home all because of COVID-19 concerns?

It was bound to happen given that the precedent of releasing criminals from prison due to COVID had already been set.

Thanks to Democrat governors like New York’s Andrew Cuomo and California’s Gavin Newsom, concern over COVID-19 has already seen numerous prisoners released—only yesterday news of 8,000 to be released in California by August.

“Maxwell was arrested on July 2 in New Hampshire on charges she conspired with Epstein to sexually abuse minors and then lied to prosecutors about it.” (Fox News, July 10, 2020)

Gilly was free and at large for months after boyfriend Epstein, found guilty of sexual crimes,  was incarcerated on July 6, 2019.

“The public has been vocal against prosecutors who neglected to bring Maxwell into custody earlier.” (Repub.li, July 7, 2020)

Epstein died in jail on August 10, 2019, his death officially ruled as a suicide.

The long arm of the law took almost a year to nab this Woman of Privilege, and most of the talk since she’s been in prison is about the possibility of her committing suicide.

So what was Epstein’s girlfriend doing at the U.N. where she was fondly addressed as our girl “Gilly”?

Saving the ocean if you believe the propaganda and spin propagated by the holier-than-thou U.N.

“I have always loved the ocean. Some of my earliest memories are of the ocean.  I grew up watching Jacques Cousteau on TV and his mesmerizing images of the deep enthralled me.  The ocean is in trouble and needs a global community to save it. Sign up for your ocean passport at the TerraMar Project, and with this simple step help give the ocean a powerful voice,” Maxwell wrote on the TerraMar Project website.

“Jeffrey Epstein and Ghislaine Maxwell operated a mysterious company called TerraMar that pushed the UN to issue passports for the ocean, listed a Manhattan property owned by the Rothschilds as a base, and was funded by the Clinton Foundation. (News Punch, July 9, 2020)

“Jeffrey Epstein and Ghislaine Maxwell’s mysterious company TerraMar, which closed down permanently just six days after Epstein’s arrest, appears to tie much of it together.

“The TerraMar Project was non-profit company that Ghislaine Maxwell started in 2012. Jeffrey Epstein and various other high power financiers funded the venture.

“The company described itself as an ocean conservation group but it shut down by 2019 over sex trafficking crimes stemming from Epstein’s arrest. It was only six days after Jeffrey Epstein was brought into custody that the firm announced it was shutting down permanently. The company had immediate support from globalist organizations including the Clinton Foundation.

“Maxwell attended multiple United Nations (UN) meetings and even spoke to the council as the founder of TerraMar. Ghislaine and another man from the company’s Board of Directors, Scott Borgerson, spoke in Washington DC at a special event sponsored by the Council on Foreign Relations.”

“The TerraMar Project, in the United States, was a self-described environmental nonprofit organization with a focus on ocean protection founded in 2012 by Ghislaine Maxwell, and funded and closely associated with convicted sex offender Jeffrey Epstein. A separate ocean conservation charity, TerraMar (UK), was incorporated in 2013 by Maxwell in Salisbury, United Kingdom.[2] TerraMar (US) announced its closure on July 12, 2019, a week after sex trafficking charges, brought by New York federal prosecutors against close associate and financier Jeffrey Epstein, became public; Epstein had already been convicted in 2008 and been a registered sex offender at the time the organization was founded by his associate Maxwell. However, the UK company continued to exist with Maxwell listed as a director until it was officially dissolved on December 3, 2019.(Wikipedia)

There’s a wealth of information to be found about TerraMar on The WayBackMachine:

Meanwhile, will the timing of Ghislaine Maxwell finally being taken into custody, with coming accusations against President Donald Trump’s bogus association with the Epstein-Maxwell sexual abuse of minors be the Democrats’ ace in the hole for going after Trump in a heated Election 2020?