Why does the VA deny vital care to troops exposed to cancer-cancer toxins in a war zone? 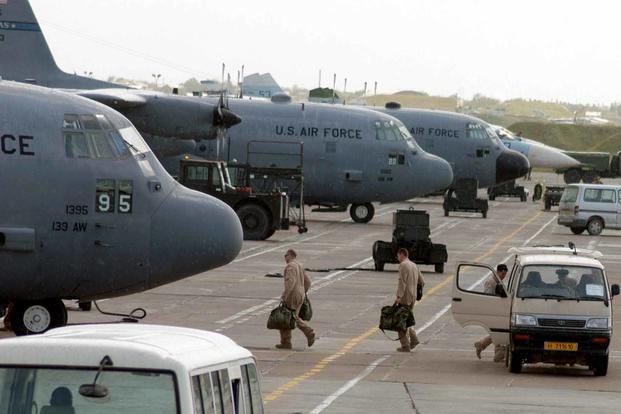 Stars and Stripes | By Steve Beynon

WASHINGTON — Recently declassified Defense Department documents show the Pentagon knew troops were exposed to multiple toxins and hazards that have led to hundreds of cancer cases and dozens of dead veterans after deploying to Uzbekistan in the early days of the War on Terror. The Department of Veterans Affairs is denying most of them care and disability.

Karshi-Khanabad Air Base, known as K2, is a former Soviet air base in southeastern Uzbekistan that shares a border with northern Afghanistan. After the 9/11 attacks, the U.S. established Camp Stronghold Freedom at K2, which was used to support combat missions from 2001 to 2005. Veterans described a toxic environment at the post, where pond water glowed green, black sludge oozed from the ground and the government posted massive white and yellow signs warning troops to keep out of certain areas due to chemical agents.

On Thursday, the House Subcommittee on National Security released previously classified documents provided by the military in 2001, 2002 and 2004 that reveal a mountain of evidence that service members were exposed to voluminous health risks including cancer-risking toxins.

Most notably, the former Soviet base had contained chemical weapons, enriched uranium and soil saturated with fuels and other solvents that formed a “black goo.”

The documents were declassified in February, but Defense officials waited until July to alert Congress, according to a release from the House Committee on Oversight and Reform. Former service members who spent time at K2 testified before on Capitol Hill in February that they were aware of at least 400 individuals diagnosed with cancers who served at the base. They said at least 30 have died.

During a health assessment test in 2001, military analysts found the base had “elevated levels of volatile organic compounds and total petroleum hydrocarbons (TPH) were detected at numerous locations throughout Stronghold Freedom, including tent city, eastern expansion area and adjacent to the aircraft maintenance facility.” It also found that ambient air is the “main concern for environmental contaminants.”

A 2002 assessment recommended not to dig “into soil contaminated with jet fuel,” but those areas were populated with tents soldiers slept in and aircraft hangars, according to the declassified document. In the same year, another DOD health risk assessment found “between 50% and 75% of personnel at Stronghold Freedom” would be exposed to elevated levels.”

“The Department of Veterans Affairs continues to deny these illnesses are related and continue to deny benefits,” Rep. Stephen Lynch, D-Mass., said in a call with reporters Thursday. VA did agree to a study on K2 veterans, according to Lynch. “It should not have been this hard to convince VA to make this commitment. … K2 veterans have time-sensitive needs that need to be addressed now.”

Five months after the United States invaded Afghanistan, air samples at the base found elevated levels of tetrachloroethylene. According to the Centers for Disease Control and Prevention, “Studies in humans suggest that exposure to tetrachloroethylene might lead to a higher risk of getting bladder cancer, multiple myeloma or non-Hodgkin’s lymphoma, a cancer that originates in the lymphatic system”

An estimated 7,000 troops served at K2 the first four years of the war in Afghanistan. However, the number might not include troops who served there on short, temporary assignments or certain special operators serving highly classified missions.

“K2 was a crime scene in need of an investigation, this is only the beginning of the investigation,” Mark Jackson a veteran who served at K2 said.

It can be difficult to definitively link diseases that some post-9/11 troops are suffering after exposure to military dump areas and contaminated bases.

“They [VA] consider their hands tied, they feel it’s not in their power to grant [benefits]. They feel at this point unless it’s documented, their hands are tied. They would prefer this was otherwise,” Lynch said.

It is unclear if declassified documents could move the VA faster on dishing out benefits. The Pentagon did not return a request for comment on whether they will urge the department to move on the issue.

The VA’s perceived slow movement and unclear communication on the issue after two decades of Middle East wars have had some compare it to the decades it took for veterans sickened with Agent Orange to finally get benefits.

“We were told by the VA they did not have scientific data to what conditions existed at K2 and how that was connected to conditions,” said Paul Widener, another veteran who served at K2.

“At this time, research does not show evidence of long-term health problems from exposure to burn pits. VA continues to study the health of deployed veterans,” according to the VA’s website.

Christina Noel, a VA spokeswoman, said Friday that disability claims are figured on a case-by-case basis. She said the department’s study on K2 vets is more than a year away.

“VA obtained the DOD K2 personnel roster and has started a study of the health outcomes for veterans who served there. Initial results are expected in 18 months,” Noel said.