By Jeff Mordock – The Washington Times 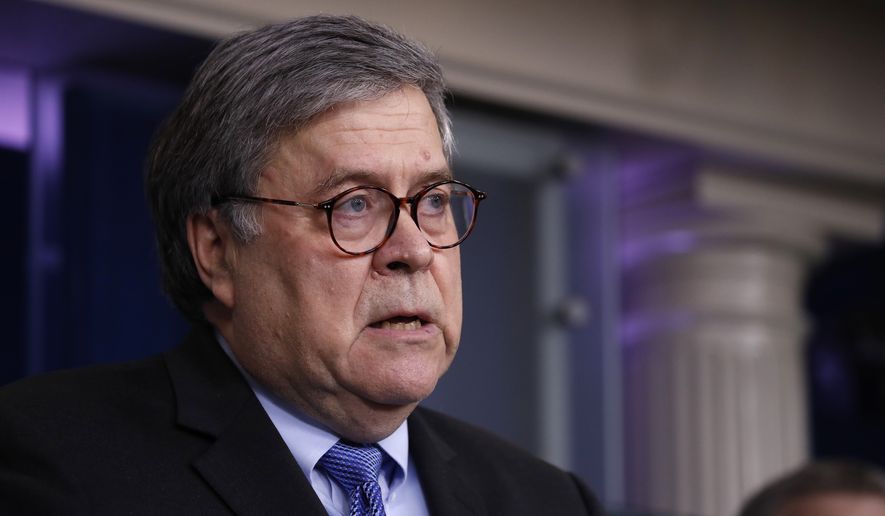 Attorney General William P. Barr on Monday ordered federal prosecutors across the country to consider legal action against governors if their efforts to stop the spread of the new coronavirus infringe on Americans’ civil rights.

In a two-page memo, Mr. Barr directed all U.S. attorneys to “be on the lookout” for local and state directives that could violate religious, free speech or economic rights under the Constitution.

“If a state or local ordinance crosses the line from an appropriate exercise of authority to stop the spread of COVID-19 into an overbearing infringement of constitutional and statutory protections, the Department of Justice may have an obligation to address that overreach in federal court,” Mr. Barr wrote in a memo to the 93 U.S. attorneys.

The two officials will work with state and local governments as well as other federal agencies, according to the memo. They will be on the alert for coronavirus response policies that restrict free speech or religious liberty as well as other constitutional rights.

“Many policies that would be unthinkable in regular times have become commonplace in recent weeks, and we do not want to unduly interfere with the important efforts of state and local officials to protect the public. But the Constitution is not suspended in times of crisis,” Mr. Barr wrote.

“We must therefore be vigilant to ensure its protections are preserved, at the same time that the public is protected,” he continued.

Throughout the pandemic, Mr. Barr has been outspoken against coronavirus restrictions, which he has described as “draconian.” The Justice Department this month filed a statement of interest siding with a Mississippi church that filed a lawsuit to overturn a local directive banning drive-in religious services.

Mr. Barr’s directive comes as governors begin reopening after the coronavirus shuttered their economies. The path has been slow, with some governors proposing reopening in stages, frustrating President Trump.

The president is eager for the nation to get back to work as unemployment claims reach record levels and businesses struggle to stay afloat with Americans stuck inside under stay-at-home orders.

Mr. Trump said this month that some governors have “gone too far” in their efforts to prevent the coronavirus from spreading. His conservative supporters have protested in a number of states demanding their governors loosen restrictions.

“The idea that you have to stay in your house is disturbingly close to house arrest. I’m not saying it wasn’t justified. I’m not saying in some places it might still be justified. But it’s very onerous, as is shutting down your livelihood,” he said in an interview with radio host Hugh Hewitt.