What’s really going on in Portland is a riot; not a protest—A RIOT!

Ongoing protests and the presence of federal forces have ratcheted up tensions in the Oregon city. 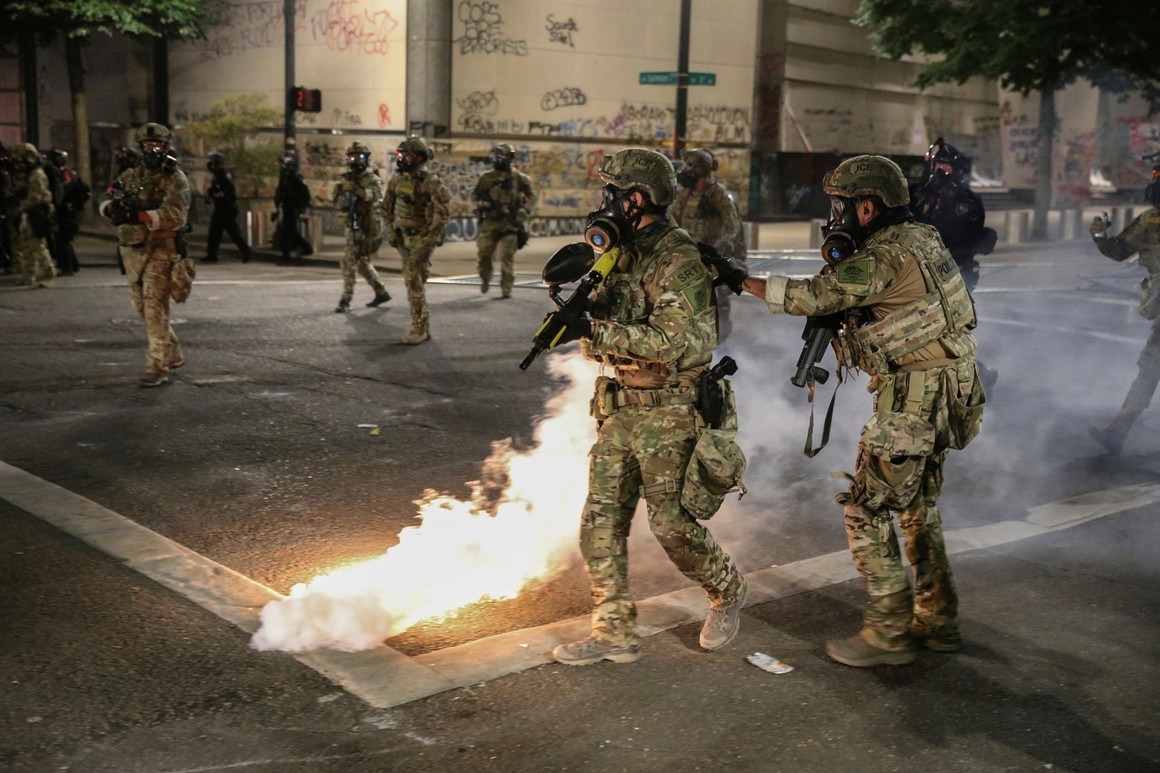 Police respond to protesters during a demonstration July 17, 2020 in Portland, Ore. | Dave Killen/The Oregonian via AP

PORTLAND, Ore. — Protesters broke into a building, set it on fire and started dumpster fires late Saturday night in Oregon’s largest city, police said, as demonstrations that have been taking place since the death of George Floyd intensified for another night in Portland.

The fire at the Portland Police Association building was put out a short time later, Portland police said on Twitter. The department declared the gathering a riot, and began working to clear the downtown area.

Tear gas was deployed, according to pictures and video from the scene. Fencing that had been placed around federal courthouse had also been removed by protesters and made into barricades, police tweeted.

President Donald Trump has decried the demonstrations, and Homeland Security Secretary Chad Wolf blasted the protesters as “lawless anarchists” in a visit to the city on Thursday.

“We are trying to help Portland, not hurt it,” Trump tweeted Sunday morning. “Their leadership has, for months, lost control of the anarchists and agitators. They are missing in action. We must protect Federal property, AND OUR PEOPLE. These were not merely protesters, these are the real deal!“

Before the aggressive language and action from federal officials, the unrest had frustrated Mayor Ted Wheeler and other local authorities, who had said a small cadre of violent activists were drowning out the message of peaceful protesters in the city. But Wheeler said the federal presence in the city is now exacerbating a tense situation and he has told them to depart.

“Keep your troops in your own buildings, or have them leave our city,” Wheeler said Friday.

Oregon Attorney General Ellen Rosenblum late Friday sued Homeland Security and the Marshals Service in federal court. The complaint said unidentified federal agents have grabbed people off Portland’s streets “without warning or explanation, without a warrant, and without providing any way to determine who is directing this action.”

The administration has enlisted federal agents, including the U.S. Marshals Special Operations Group and an elite U.S. Customs and Border Protection team based on the U.S.-Mexico border, to protect federal property.

But Oregon Public Broadcasting reported this week that some agents had been driving around in unmarked vans and snatching protesters from streets not near federal property, without identifying themselves.