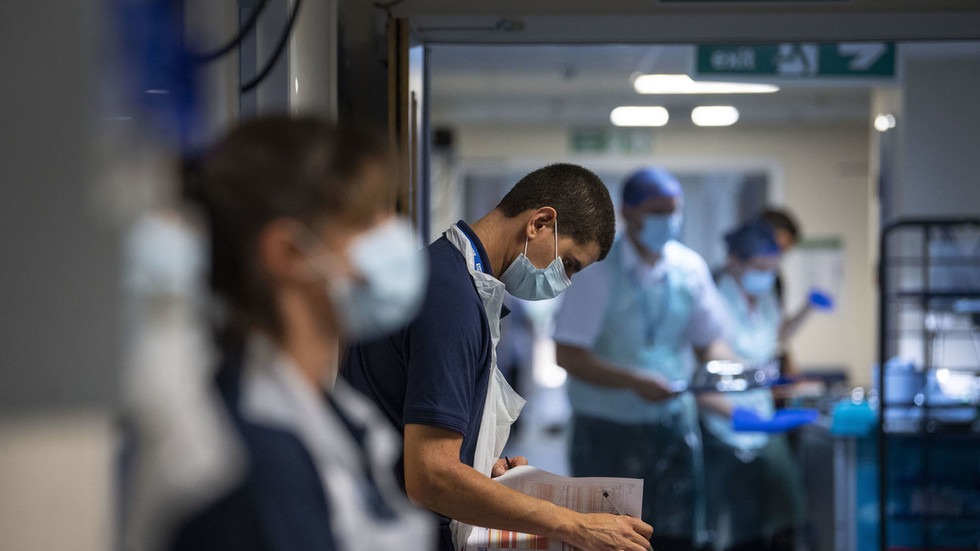 A Rehab Support worker checks on patient notes as the first patients are admitted to the NHS Seacole Centre at Headley Court, Surrey, a disused military hospital, which has been converted during the coronavirus pandemic, May 28, 2020 © Getty Images / Victoria Jones/PA Images

More evidence emerges of inflated Covid-19 fatality rates – are we being intimidated?

By Malcolm Kendrick, doctor and author who works as a GP in the National Health Service in England. His blog can be read here and his book, ‘Doctoring Data – How to Sort Out Medical Advice from Medical Nonsense,’ is available here.

This week we were told that, in the UK at least, anyone who has had a positive Covid test and who then died – from any illness – would be recorded as a coronavirus-related death. No matter when they die.

This means that someone could have tested positive in March, with no symptoms of Covid at all, and who then died in July, would be recorded in the official figures, as having died of Covid-related causes. Even if they were hit by a bus.

Even more weird is the fact that there does not seem to be any time limit to this. So, you could test positive in March 2020, then die in March 2040, and still be recorded as having died of Covid. I doubt this will happen, but it could.

In short, in the UK, you cannot ever recover from Covid. Once you’ve got it, that’s it, you’ve got it. This anomaly has been reported-on before. Here, for instance, from The Guardian in June.

‘Britain is an outlier internationally in not reporting the number of people who have recovered from Covid-19 alongside statistics on deaths and numbers of identified cases.’

Why would anyone want to do this? You would think the Government would be pulling out all the stops to decrease the number of recorded Covid deaths. Especially as the UK is sitting in a pretty dismal place on the international comparison charts. Why deliberately inflate your figures?

However, it is not just the UK that is hyping up Covid deaths. A reader of my blog sent me an analysis of the WHO advice on death certification, which seems accurate. In his analysis:

1. If you die of anything and they suspect you might have it, with no tests and perhaps just because everyone else is assumed to have it, then covid-19 goes on the death certificate as the primary cause of death. Broadly speaking… unless the patient dies of something that is sudden and cannot be a long-term comorbidity.

2. If you have the same symptoms as flu or pneumonia you must be put down as Covid-19 and not as due to an influenza-type illness.

3. Any certificates that are in any way erroneous with regard to the above must be recoded to conform.

4. Any Covid-19 codes that are wrong should not be fixed in any circumstances

To me it looks like a recipe for a systematic over inflation of death counts, designed to disallow or circumvent clinical judgement.

In the US Dr Scott Jensen, a physician and a member of the Minnesota senate, has been notified by the board of medical practice in Minnesota that he is being investigated for public statements he has made.

Essentially, he is being accused of spreading misinformation about the completion of death certificates, and the overestimation of deaths from Covid-19. Also, that he has been comparing Covid-19 to influenza, in terms of how serious it is. This is considered ‘reckless advice.’

For pointing out the over-reporting of Covid-19 deaths and daring to claim that Covid-19 is no worse than a bad flu season, he could be struck off the medical register.

So, it seems that around the world the same things are being seen. A seemingly coordinated attempt to vastly overinflate the number of deaths caused by Covid-19, and to drive home how deadly it is.

For example, a few days ago, a new story hit the headlines in the UK, warning of hundreds of thousands of deaths this winter.

‘The UK could see about 120,000 new coronavirus deaths in a second wave of infections this winter, scientists say.

Asked to model a “reasonable” worst-case scenario, they suggest a range between 24,500 and 251,000 of virus-related deaths in hospitals alone, peaking in January and February.’

Where did this come from? It was a model, using exactly the same assumptions as that created by Prof Neil Ferguson from Imperial College London in March. The one that warned of 500,000 deaths in the UK. Only out by a factor of ten. Probably far more, because many of the deaths recorded as due to Covid have been, simply, wrong.

How certain was their prediction of 120,000 deaths? Professor Stephen Holgate, who chaired the report then said. ‘This is not a prediction – but it is a possibility.’ A possibility… Perhaps it should be published in the Journal of possibility-based medicine. A journal where you simply make up facts, then see how many people run around in sheer terror.

What is now happening is extremely disturbing. Covid-19 has certainly been a serious disease, but the flu epidemics of 1957 and 1967 were just as bad, if not worse, with regard to total fatalities. They were both over a million, and Covid has a long way to go to match that.

In addition, in those epidemics far more younger people died. With Covid-19, if you are under fifteen, the chance of dying of it is around one in two million, which is three times less that the chance of being struck by lightning.

Across Europe, the excess in deaths has simply disappeared. There is no increased mortality anywhere to be seen. Whilst we are told about outbreaks of Covid deaths in various cities, the rate of new infection in these ‘outbreaks’ is less than one in a thousand. Which is not really an outbreak at all.

Despite this, mask wearing is to be mandatory. When Covid-19 took off, no-one was wearing a mask in my unit, unless they were helping a patient, and there was no social distancing between staff. Now the trust has decreed masks must be worn at all times and social distancing is being ruthlessly enforced. A bell now rings, and we must wipe all surfaces in front of us…

The reality is that Covid-19 has all but gone in the UK and Europe. The slow, but inexorable rise in deaths in the UK is being driven by the fact that anyone who has ever had a positive Covid-19 test, who dies, is recorded as having died of Covid.

Yet, as Covid-19 disappears, mask wearing and social distancing is being enforced as never before, and the prospect of a deadly second wave is being waved like a black shroud, with warnings of hundreds of thousands of deaths to come.

A biomedical scientist in the UK sent me an e-mail two days ago, about the testing they had done.

‘In the week 9th – 16th July we carried out 2800 PCR tests (across three different platforms: mainly on the Hologic Panther, but some on the Cepheid GeneXpert and Biomerieux BioFire) and had only 4 positives. These 4 positives were all patients who had previously tested positive. We had NO new cases, and after checking back a few weeks, the only positives we have had have been from repeat swabs from these same 4 patients – they were almost acting like QC samples to ensure that our tests were actually working properly!’

This scientist contacted other laboratories, and they were seeing the same things. ‘I have contacted a couple of nearby NHS Pathology Labs and they reported the same findings as us: zero or near zero new cases for several weeks.’

What on earth is going on?