What does each of the above attacks on
the American Republic have in common?

ANSWER: They are meticulously orchestrated prongs of a
multi-pronged, multi-decade globalist strategy to destroy the
United States of America.  Throughout 2020, these and many
other furtive assaults on the American people are being
fastidiously choreographed to bring about the free-fall collapse
of this nation.  The implementation of the New World Order
agenda can only proceed with the permanent destruction of the
American Republic.  As always, communists and socialists,
anarchists and terrorists, bolsehviks and insurrectionists are
being enlisted to tear apart American cities.  That riots, protests,
violence, looting, business destruction and autonomous zones
are being permitted and abetted in the Democrat-controlled
cities and states proves that this named Purple Revolution
is a highly organized plan to overthrow the US government by
any means necessary.  Again, all of the cataclysmic events listed
above are being purposefully orchestrated for maximum dramatic
effect to produce planned outcomes according to the NWO strategy
and MO: Problem~Reaction~Solution.  In this way, the globalist
perpetrators endeavor to manufacture consent until a critical mass
of U.S. citizens demand their own incarceration for the perceived
safety in the maximum-security prison that is being insidiously
constructed nationwide.  Just who is it that is stealthily using this
Hegelian Dialectic stratagem, and how is it being slyly carried out
IN BROAD DAYLIGHT today? 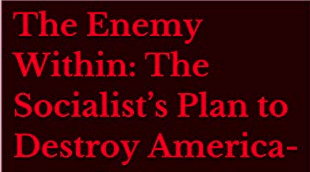 If ever there was a timely [BREAKDOWN] that provides the single most critical exposé of what the American Republic is facing today, the video presentation posted below is it.

SOTN has been writing an extended essay on this same topic in which we draw parallels from the ongoing Purple Revolution in America to the French Revolution, 1917 Bolshevik Revolution and Cultural Revolution in China.  However, this research project neglected to include the “Breakup of Yugoslavia”—a much more current event that also parallels the ongoing balkanization of the United States.

While the analysis that follows appropriately avoids some of the deeper issues regarding the New World Order agenda, Deep State schemes and globalist game plan, its primary purpose is to explain the basic current realities throughout the USA in simple terms.  Hence, if there is one video that friends and family, co-workers and business acquaintances should watch sooner than later, this highly informative and deeply insightful production ought to be the one.

That the refreshingly candid narrator is a truth-speaking Yugoslavian woman who directly experienced in the Balkans what is happening in the 50 states makes it an extraordinarily compelling analysis.  She obviously has no agenda except to impart the stark realities as they unfolded in her home country during the early 1990s.  This very brave and smart woman has every reason to state the facts as she witnessed them, and as she perceives them evolving right now across the USA.  Hence, the title:

“Yugoslavian Issues Warning To All Americans”

N.B. The following video ought to be required viewing for the American Patriot Movement.  With that said, there are very good reasons why it has been posted
over 35 times on this site.  Very few people really understand just how serious
things are in these once United States of America.  Therefore, everyone is
strongly encouraged to find a post title that best suits their audience and send it
out far and wide.  For those who remain unconvinced of the dire state of affairs in this country, please read the following reality check: THE AMERICAN “CASSANDRA PROPHECY”: Everything Changes After Election Day 2020.

If the American People
do not heed this urgent warning,
the nation is quite likely to repeat
some extremely unpleasant history!
Therefore, it you find this video
resonatin’, please begin disseminatin’.