Why is Trump giving $1.16 billion the Gates’ Vaccine Alliance? 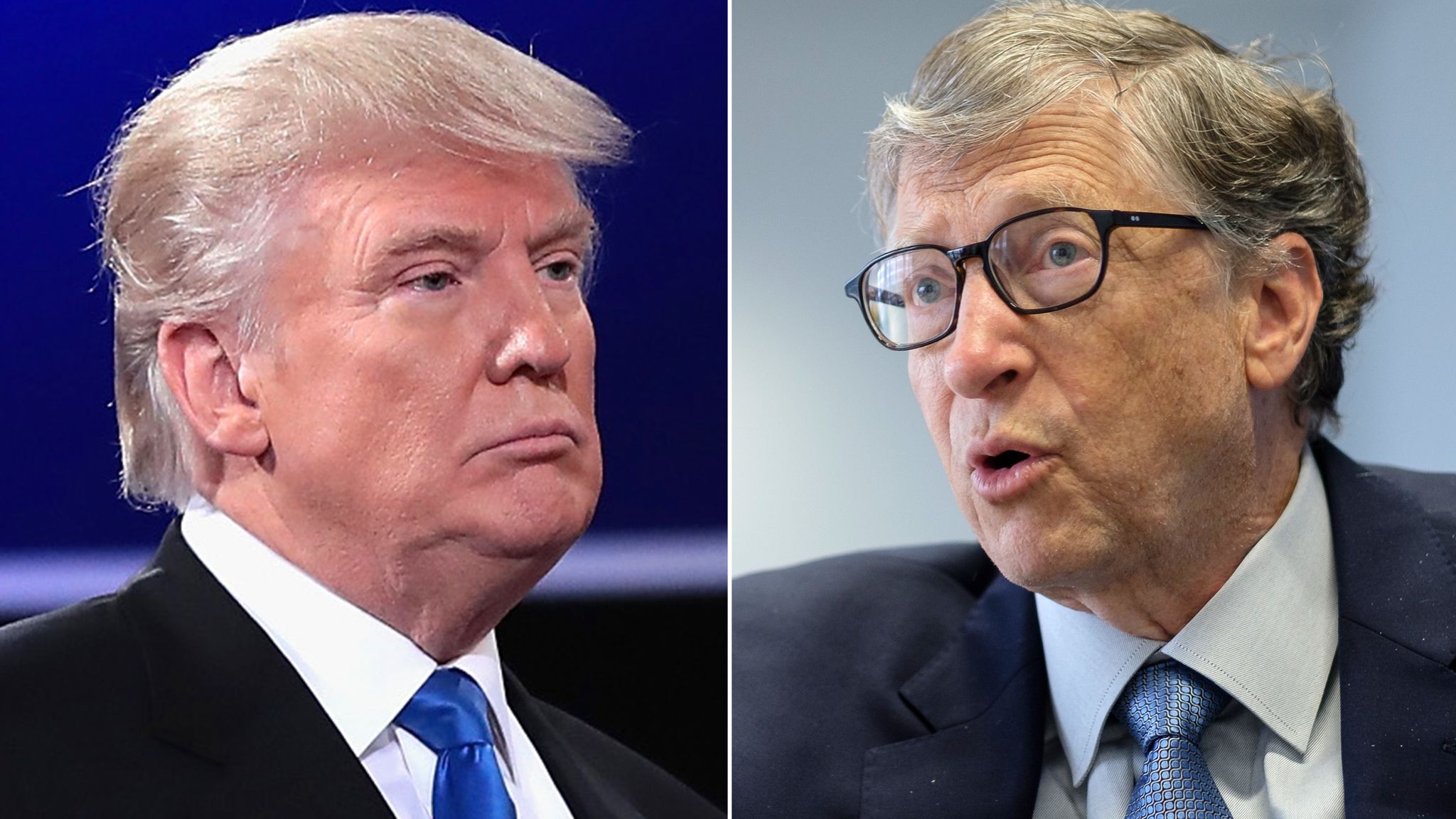 What Happened: Last month, US President Donald Trump “donated more to Gavi, the Vaccine Alliance, to prevent the spread of infectious diseases worldwide.” He did so in a statement of support for Gavi at the public Gavi pledge conference, which was hosted by the United Kingdom, on June 4th. So far, the United States has donated more than $12 billion for the development of COVID-19 vaccines and therapies, and “the U.S. commitment to immunization complements the work of innovators in the United States and other countries who are racing to find a vaccine and treatments for COVID­19.” (source)

Bill and Melinda Gates co-founded the Gavi alliance in the year 2000, it’s a public-private partnership that claims to support “global health-system strengthening and vaccine deployment for infectious diseases worldwide.”  (source)

–>FREE Documentary: Discover the latest breakthroughs in alternative treatmennts that are scientifically proven to successfully prevent and treat cancer. Click here to save your spot!

Shortly after this, Trump announced that they will give nearly $2 billion to Pfizer, a big pharmaceutical company, for 100 million doses of a COVID-19 vaccine that could make its way into the public domain sometime next year. According to Health and Human Services Secretary Alex Azar, the U.S. could buy another 500 million doses under the agreement if the vaccine is safe and effective in the U.S.

Multiple countries are now purchasing vaccines for the new coronavirus.

Why This Is Important: It’s important because the coronavirus vaccine is extremely relevant right now and on the minds of many as the only possible solution to this pandemic, at least that’s how it’s being marketed, despite the fact that multiple peer-reviewed studies and examples have emerged from all over the world regarding the success of other interventions.

For example, a study published last month in Frontiers in Immunology titled “Quercetin and Vitamin C: An Experimental, Synergistic Therapy for the Prevention and Treatment of SARS-CoV-2 Related Disease (COVID-19)” concluded the following:

Quercetin displays a broad range of antiviral properties which can interfere at multiple steps of pathogen virulence – virus entry, virus replication, protein assembly – and that these therapeutic effects can be augmented by the co-administration of vitamin C. Furthermore, due to their lack of severe side effects and low-costs, we strongly suggest the combined administration of these two compounds for both the prophylaxis and the early treatment of respiratory tract infections, especially including COVID-19 patients.”

As far as vitamin C goes, this is not the only study or article to recommend its use when it comes to treating COVID-19. For examplem Medicine in Drug Discovery of Elsevier, a major scientific publishing house, recently published an article on early and high-dose IVC in the treatment and prevention of Covid-19. High-dose intravenous VC was successfully used in the treatment of 50 moderate to severe COVID-19 patients in China. The doses used varied between 2 g and 10 g per day, given over a period of 8–10 h. Additional VC bolus may be required among patients in critical conditions.”

New York hospitals were also seeing success with Quercetin and Vitamin C. You can read more about that here. Vitamin C isn’t the only ‘alternative’ therapy, Hydroxychloroquine also caused quite a bit of controversy. The main point I am trying to make here is that mainstream media has not only ignored these facts, but there seemed to be a coordinated attack on the idea that these therapies can work. Once the mainstream media and organizations who are threatened come up with a way, whether it be by paying scientists or manipulating data, to ridicule an idea, that idea instantaneously loses credibility in the minds of the masses. That’s how much of a stranglehold mainstream media has, and has had on our collective perception.

This fact was also  emphasized by Professor Heidi Larson, a Professor of Anthropology and the Risk and Decision Scientist Director at the Vaccine Confidence Project. She is referenced by the authors in the study above. At the WHO conference, she emphasized that safety concerns among people and health professionals seem to be the biggest issue regarding vaccine hesitancy.

The other thing that’s a trend, and an issue, is not just confidence in providers but confidence of health care providers, we have a very wobbly health professional frontline that is starting to question vaccines and the safety of vaccines. That’s a huge problem, because to this day any study I’ve seen–and we’re constantly looking on any studies in this space–still, the most trusted person on any study I’ve seen globally is the health care provider.

There are a number  of physicians and scientists raising awareness about this. The Physicians For Informed Consent are one of many such groups. This brings me to my next point, informed consent.

Vaccine mandates have already caused quite a controversy when it comes to children. The right to receive a medical or religious exemption is being taken away in various states, and a child cannot attend a public school unless they are up to date with the CDC’s recommended vaccination schedule. This is done on the basis that unvaccinated children are a danger to vaccinated children, which is a highly flawed argument given the fact that vaccines aren’t safe and effective for everyone, which is why the National Childhood Vaccine Injury act has paid nearly $4 billion to families of vaccine-injured children, and that’s only counting approximately 1 percent of vaccine-injured children because most of them go unreported. You can read more about that here.

Similar to CDC estimations, PIC’s analysis results in a COVID-19 CFR of 0.26%, which is comparable to the CFRs of previous seasonal and pandemic flu periods. “Knowing the CFR of COVID-19 allows for an objective standard by which to compare both non-pharmaceutical interventions and medical countermeasures,” said Dr. Shira Miller, PIC’s founder and president. “For example, safety studies of any potential COVID-19 vaccine should be able to prove whether or not the risks of the vaccine are less than the risks of the infection. (source)

Alan Dershowitz and Robert F. Kennedy recently had a vaccine debate regarding the safety of vaccines. It includes a discussion about the upcoming COVID-19 vaccine. You can watch that and read more about it here.

Last but not least, it goes to show just how susceptible politicians and presidents are to what many before them have referred to as the invisible government. Donald Trump was clearly not a fan of vaccines, and that was made clear during his 2016 election campaign. When it comes to politics, big business always seems to win. Even those from within our federal health regulatory agencies are speaking up. In fact, only a few years ago, more than a dozen scientists from within the CDC put out an anonymous public statement detailing the influence corporations and rougue interests  have on government policy. They were referred to as the Spider Papers.

The invisible government, which like a giant octopus sprawls its slimy legs over our cities, states and nation…The little coterie of powerful international bankers virtually run the United States government for their own selfish purposes. They practically control both parties…(and) control the majority of the newspapers and magazines in this country. They use the columns of these papers to club into submission or drive out of office public officials who refuse to do the bidding of the powerful corrupt cliques which compose the invisible government. It operates under the cover of a self-created screen and seizers  our executive officers, legislative bodies, schools, courts, newspapers and every agency created for the public protection.” (source)(source) – John F. Hylan, Mayor of New York City from 1918-1925

Another great one from Theodore Roosevelt

“Political parties exist to secure responsible government and to execute the will of the people. From these great tasks both of the old parties have turned aside. Instead of instruments to promote the general welfare, they have become the tools of corrupt interests which use them impartially to serve their selfish purposes. Behind the ostensible government sits enthroned an invisible government, owing no allegiance and acknowledging no responsibility to the people. To destroy this invisible government, to dissolve the unholy alliance between corrupt business and corrupt politics is the first task of the statesmanship of the day.”(source)

At the end of the day, the new coronavirus and the measures taken to combat it have caused a lot of controversy. When someone like NSA whistleblower Edward Snowden said governments are using the coronavirus to push more authoritarian measures upon the population, it’s important that we listen. Instead, we prosecute them, exile them, and put people like Julian Assange who expose war crimes in jail while we agree with and identify with those who are committing the crime. What is encouraging, however, is that just like 9/11 did, COVID-19 is shifting human consciousness in a major way.