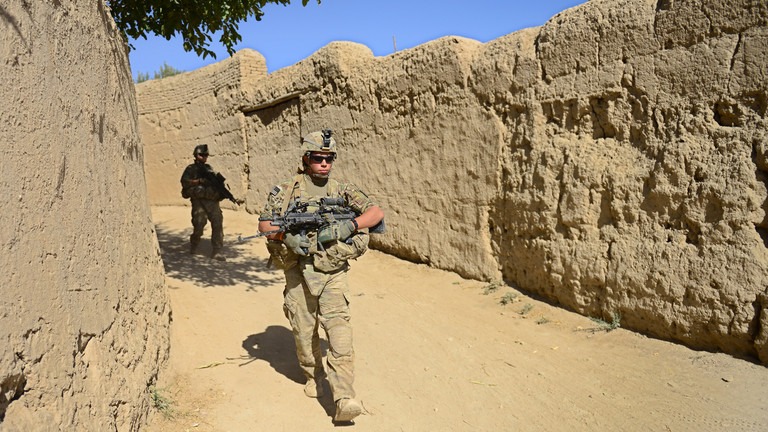 Donald Trump said he hasn’t discussed with Vladimir Putin the media report claiming that Russia had paid the Taliban in Afghanistan to kill US troops. This so-called ‘intelligence’ never even reached his desk, he repeated.

Trump was addressed on the month-old story, which was first published in the New York Times, during his lengthy interview for “Axios on HBO.”

His most recent phone call with Putin, on July 23, was about “other things,” the US president recalled. “And frankly, that’s an issue that many people said was fake.”

Among those playing down the allegation that Russia had been paying such bounties to Taliban fighters were US Defense Secretary Mark Esper, who said that “all the defense intelligence agencies have been unable to corroborate that report,” and the chair of the Joint Chiefs of Staff General, Mark Milley.

Even the New York Times itself later admitted that its bombshell article wasn’t based on “explicit evidence.”

Despite all this, interviewer Jonathan Swan kept referring to the report as “intelligence,” but Trump said that this data hadn’t even been reported to him officially. “It never reached my desk. Because… they didn’t think it was real.”

The same goes for assumptions that Moscow had been providing the Taliban militants with money and weapons to fight the American troops, who have been in Afghanistan for 19 years now. “I have heard that, but… again, it’s never reached my desk,” the president pointed out.

“Hey, Russia doesn’t want anything to do with Afghanistan,” the US leader assured viewers. “Russia used to be a thing called the Soviet Union. Because of Afghanistan, they went bankrupt. They became Russia.”

The military campaign which the USSR waged in Afghanistan between 1979 and 1989, is widely believed to be one of the reasons for the collapse of the Soviet Union. Trump also reminded that it was the US who’d supplied the Taliban with arms during that conflict.

“It’s interesting. Nobody ever brings up China. They always bring up Russia, Russia, Russia,” he said, indicating that he was more interested in discussing Beijing than Moscow.

The US’ lengthy presence in Afghanistan was also among the topics of the interview, with Trump promising to greatly reduce the contingent, which now stands at 8,500.

However, he refused to name an exact date for the withdrawal, only saying that it’ll happen “very soon.”

Ending the US’ participation in overseas conflicts, including Afghanistan, was one of Trump’s key campaign promises during the 2016 election. But its fulfilment faced strong opposition from the president’s security advisers and the Pentagon, who insisted that an abrupt withdrawal will plunge an already turbulent Afghanistan into complete chaos. So, the US contingent only grew, reaching more than 12,000.

However, last month some 4,000 troops were pulled out from the country, in line with February’s peace deal that the Trump administration signed with the Taliban. The agreement calls for a full US exit from the country by next spring.