There is some reasonably damning stuff on this page – it is fairly obvious Israel did this. Scroll past this photo.

In this photo: You can clearly see that buildings, even those protected from the blast by the grain elevator, got obliterated. I doubt this was “2700 tons of amonium nitrate” that was never even mixed with fuel to make it go boom. Something else did this, NICE CRATER. 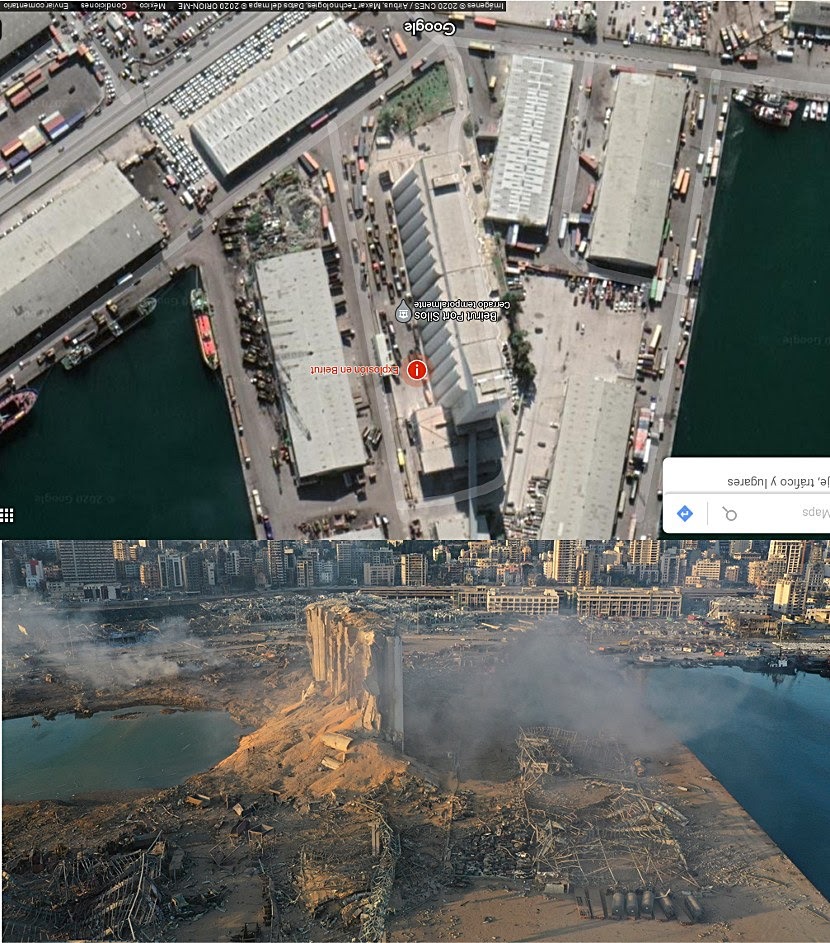 Winning rumor (What I’ll rate as the hands down winner:)

Iran was assembling weapons in that warehouse next to the grain elevator, and in reality, the explosion was caused by improperly activated solid rocket fuel. Ammonium nitrate? MY @SS. AS IF tons of fireworks and other goodies were in that warehouse with a bunch of abandoned fertilizer, RIGHT ON THE MOST PRIME REAL ESTATE IN THAT PORT. How stupid. What a stupid thing to say. However, high value weapons there? Israel not happy with that? Maybe. Great rumor.

After all, you could totally get around sanctions by putting your goodies together there! What’s the president of Lebanon going to admit to? Fertilizer, or Iranian weapons facility?

KEEP READING, THE GOOD STUFF IS AFTER THIS.

Now the president of Lebanon is saying it was ammonium nitrate. I disagree, without any fuel in it, – with just straight ammonium nitrate, it cannot explode like that. Israel “did not do this” just like they were not involved in 911. A PICTURE IS WORTH A THOUSAND WORDS, AND I HAVE THAT PICTURE. THIS WAS AN ATTACK NO IFS OR BUTS.

WTF, OVER!!! TAKE A LOOK AT THIS PICTURE FROM NEAR THE LEBANON BLAST GROUND ZERO!!!

I doubt this is coincidence, who the hell spray paints that and then has “goodbye” actually happen? Arabic is Lebanon’s official language, that was done for an English speaking audience and then, (I am sure coincidentally) it ended up perfectly framed in an aftermath photo. Who TF thinks of doing THAT in graffiti either before or after anyway? Whoever took this photo knows what happened. 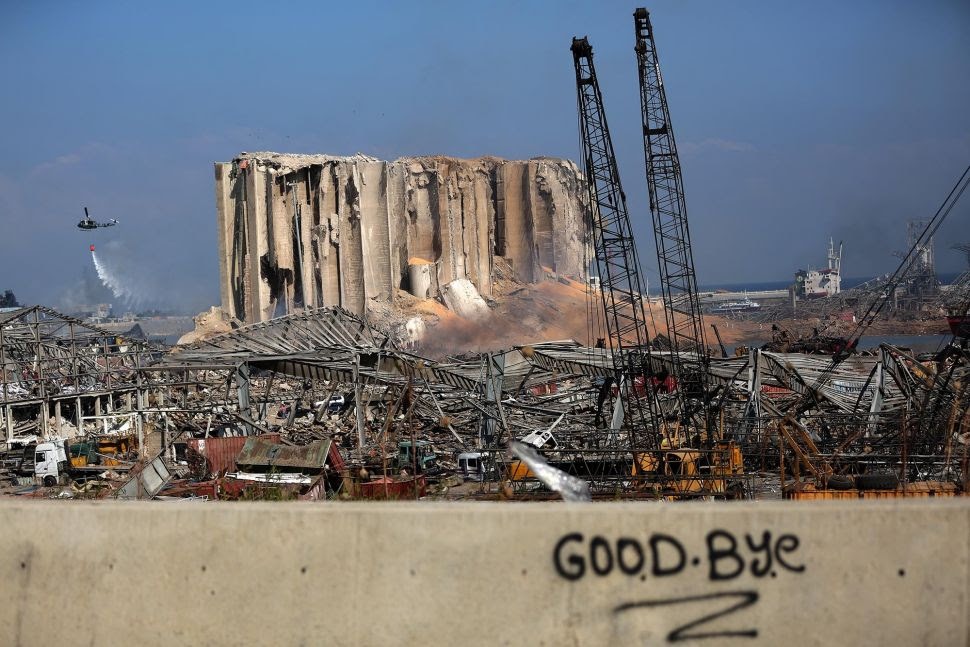 To top it all off, that’s a giant grain elevator in the background, that has countless bushels of destroyed grain, right in the middle of an impending COVID famine. I would not be surprised at all if that grain elevator was the main target of an attack. Something is not right about this.

My final conclusion: it was an attack by Israel, “Goodbye” clinches it.

The nature of the shock wave clearly shows this was a single device precision explosion that was not ammonium nitrate. The only explosions on record that happen with such precision they send out perfect spheres of that size are nuclear weapons. A large amount of conventional high explosive put together in one big bomb could likely do this also, but this was clearly not fertilizer, which needs fuel added to it before it can explode at all, let alone like this.

There were Israeli warplanes heard in the area prior to this also. So I’d like to offer a new proposition: What if someone from Israel was sent in to start a fireworks cache to set a precedent, and then in the middle of that mayhem, Israel nuked the place? If anything like this happens again, well, things did not magically change overnight, we are likely looking at a new war tactic. Something is not right about this, if this is legit we need ZERO REPEATS EVER AGAIN to prove it.

The damage posted on PressTV does not look like 2.7 kilotons either, it looks more like 20 KT. YOU CANNOT “DESTROY HALF OF BEIRUT” WITH ANYTHING LESS. Sure, the ground zero area is bad, but what is not so easily seen is the buildings that are still standing have heavy damage, and crushed the cars in the streets below them with falling debris. There are tons of those types of pictures. 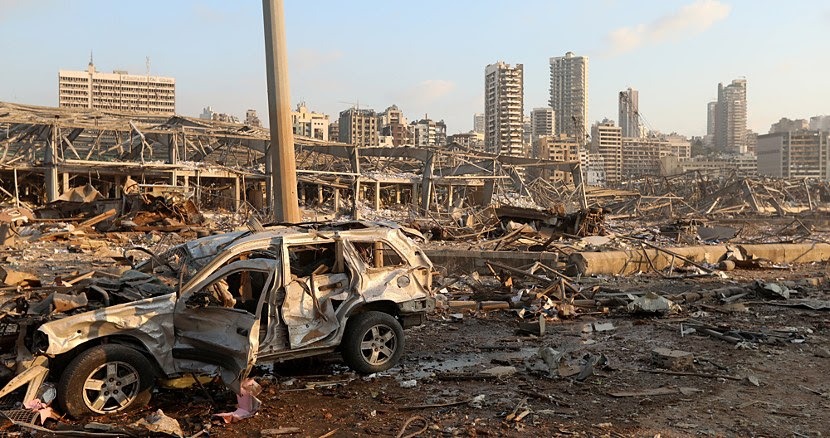 Look at how far the blast damage extends out. Even the distant buildings are wrecked. What about the other direction? This is a devastation zone well over a mile across. Even the church at Hiroshima, 700 feet away from the ground zero of that bomb remained standing despite being gutted.

The buildings in the background in Lebanon are the same, this is similar damage and that grain elevator exceeds Hiroshima type damage, considering how far it was from the actual blast site. I’d bet $500 that grain elevator was 100X as tough as that church that stayed standing in Hiroshima, I do not believe this kind of damage happened outside the realm of war.

This level of damage to Lebanon is too good to be true for Israel, and I’ll hedge my bets that it is, in fact, too good.

There are rumors there was a warehouse full of ammonium nitrate that blew up, Those rumors are BUNK. Ammonium nitrate is an oxidizer and needs something to oxidize added before it will explode. If that ammonium nitrate was not somehow saturated with a couple thousand tons of diesel to make this blast possible, something else did this.

This video is probably the best one for showing what happened,  (scroll down to 2nd video)

I AM CHANGING MY TUNE. THAT “GOOD BYE” IS TOO DAMNING, WHO THE HELL WOULD SPRAY PAINT THAT AND THEN GO BACK AND GET IT IN A PICTURE AND/OR SPRAY PAINT THAT AFTERWARDS JUST FOR A PICTURE? WHO WOULD COME UP WITH A WORKING CAN OF PAINT AFTER THAT ANYWAY? IF THIS WAS PAINTED AFTERWARD, WHY WOULD SOMEONE BRING IN A CAN JUST TO DO THAT? THIS WAS AN ATTACK AND THAT GRAIN ELEVATOR WAS THE TARGET. THAT GRAIN ELEVATOR BY ITSELF IS AN EPIC DISASTER AND THAT GOODBYE PIC HAS ISRAELI MOSSAD WRITTEN ALL OVER IT. WHO THE HELL WOULD DO THAT? WHO T.F. WOULD DO THAT????

Israel “offered help”. That means they are innocent, RIGHT??? Please “let us help,” so we can go in there and expunge any evidence we might find!!!
My Comment: OK, someone could have spray painted that “Good Bye” message to Implicate the USA military or Israel afterward to put the blame on them.

As a mater of fact a couple U.S. spy planes were noted flying over the area the day before the explosion.  I saw it on twitter…..a screen shot of the online radar tracking, at “Syrian Girl” twitter account yesterday.  I glossed over it because I couldn’t imagine that the U.S. would do this or even be involved in it, and I imagine they are flying spy planes every where all the time.
Ok, I officially give up.  I thought I had it all figured out today, looks like I might be wrong.
HOWEVER THERE IS STILL THE ISSUE THAT Lebanon, who knows by now, that a nuke got detonated yesterday 1) isn’t saying anything about the nuke or fallout, and 2) Lebanon is taking the blame for this “accident” themselves…..to cover up that they had nukes there to begin with.
Israel might have dropped a non-nuke at the site knowing there were missiles there, and was surprised to find there actually was a nuke there.
Or, IF a U.S. spy plane is equipped with devices to identify nukes……and they found them, they might have provided that feedback to Israel.
I’ll see if I can re-locate that twitter snapshot of online radar of two U.S. spy planes.