First, here’s the deep fake video that shows a so-called missile superimposed
on an original video of the Beirut bombing explosion.

Now, see the screenshot below of that superimposed missile (upper left of the freeze frame) that was performed by an obvious amateur. 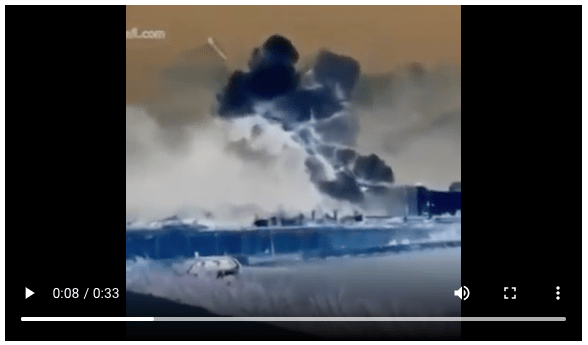 What follows is another screenshot from a different video that was produced which captured the same juvenile attempt to discredit the reality that the Beirut bombing was caused by either a nuclear missile delivered by warplane or warship, or by a tactical nuclear device planted at the targeted warehouse site, or the ammonium nitrate was detonated via a directed energy weapon.

In case anyone is confused by the preceding brief analysis, here’s the distillation of the essential facts.

Yes, there was a premeditated bombing of the warehouse at the Port of Beirut that practically everyone in the Middle East knew housed upwards of 2700 metric tons of ammonium nitrate for at least 6 years.

This ticking time bomb was then exploded on purpose by the state actor who name answers the question: “Cui bono?”   The same nation also nicely meets the “Occam’s razor” test.

FALSE FLAG OPERATION: Beirut Targeted By Devastating
9/11-Level Terrorist Attack—Who did it and Why?

Then, as a means of discrediting the most likely scenario that the warehouse was blown up on purpose, a highly amateur deep fake video was floated.  Not only were multiple deep fake videos posted on YouTube and elsewhere, some of them were quickly removed thereby lending to the possibility of the authenticity.  In this way, ridiculous deep fake video presentations are used as a means of throwing serious Internet investigators off the trail.

Do you see how this is done?!   These and other cyber-tricks are routinely used by the globalist perps as misdirection for virtually every false flag operation they cunningly carry out.