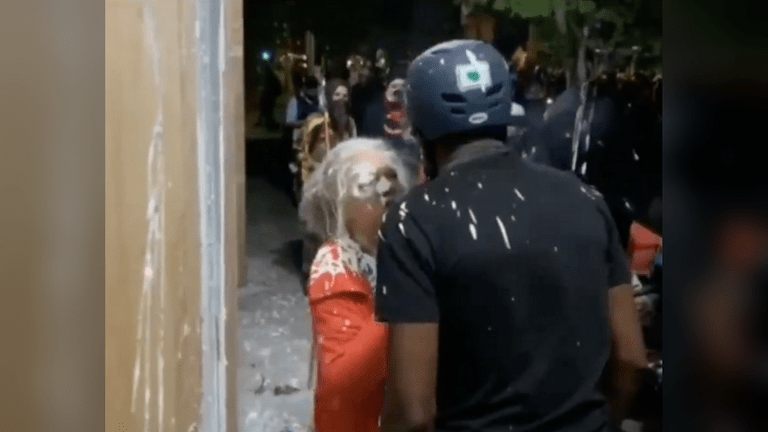 More Black Lives Matter protests turned to rioting in Portland as two elderly women were targeted by demonstrators as the pair tried to stop them from attacking a police precinct and setting a fire.

Portland police tweeted a photo of one elderly woman targeted by the protesters who was doused in what appears to be white paint. The tweet, however, mistakenly identified her as another victim using a walker who was also targeted.

Police corrected their tweet after learning of the separate incident. Both women attempted to stop demonstrators from attacking the Portland Police Department’s East Precinct – which was boarded up after being targeted the night before – late Thursday night.

As protesters were hitting the boards with paint cans, the first elderly woman trying to stop them was screamed at, hit with paint, and had yellow tape thrown on her. As she tried talking rioters down, people could be heard screaming, “put your mask on!”

The second woman, who was using a walker, was actually holding a BLM sign, but that didn’t seem to help much with the crowd. One protester gets close to her and begins screaming. She is even blocked at one point from attempting to put out a fire set by the demonstrators.

Portland police eventually deemed the gathering an “unlawful assembly” and dispersed the crowd. They tweeted pictures of projectiles thrown at police, as well as pieces of rebar used to pop the tires of police vehicles, causing significant damage.

“As officers dispersed the crowd, they were hit with projectiles ranging from glass bottles to heavy rocks. Large rebar ties were thrown into the street with the intention of popping police vehicle tires. Several police vehicles ran over them, which caused damage to tires. While officers dispersed the crowd, several custodies were taken,” they said through a statement.

After being dispersed, the crowd made its way back to the precinct and officers were assaulted with paint cans, rocks, and fireworks.

Several arrests were made, including one individual carrying a handgun.

Despite Portland protests continually turning to violence and federal authorities needing to enter the area after a fire was set at a courthouse, Oregon Governor Kate Brown (D) has called the demonstrations “peaceful” and “non-violent” and criticized the Department of Homeland Security for involving themselves in the situation.

Portland Mayor Ted Wheeler (D) has also described protests in his city as peaceful in the past.

President Donald Trump has warned that federal agents will continue to intervene in cities like Portland if protests keep turning violent. The governor has not commented on demonstrators targeting a police precinct.