RACE RIOTS 2020: A Soros-funded scheme to overthrow Trump and collapse the Republic

Are riots rattling US cities part of Soros’ plan to re-shape America and take down Trump?

Soros and other leftists have been plotting against Trump since 2016. 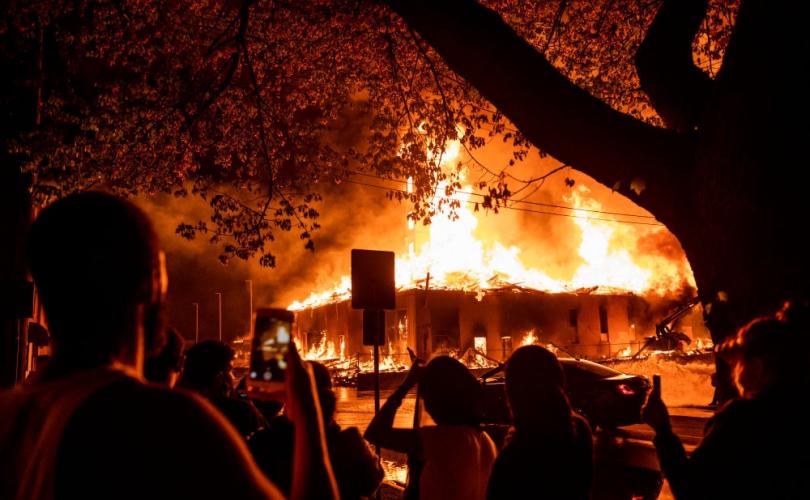 People look on as a construction site burns in a large fire near the Third Police Precinct on May 27, 2020 in Minneapolis, Minnesota during a protest after the death of George Floyd.Stephen Maturen / Getty Images

June 17, 2020 (LifeSiteNews) – What in the world is happening in cities across America? Is it a peaceful, spontaneous modern civil rights movement, or is it a planned and orchestrated seditious revolution?

We will show you how the violent riots tearing American cities apart are part of the anti-American, anti-Trump Resistance movement. We will also show how the Resistance effort itself is part of a long string of Marxist efforts aimed at destroying what is left of Christian civilization in America, and how George Soros is likely playing a leading role in causing this mayhem.

If you would like to join your voice to ours, please sign our petition, which asks the DOJ, the FBI, and every appropriate state law enforcement agency to investigate George Soros, his Open Society Foundation, and the funding behind the domestic terrorism occurring in the streets of America.

From the very earliest moments of President Trump’s inauguration, the radical left has been involved in a concerted effort to sow division. Consider how they have attempted to conflate President Trump’s Make America Great Again and America First platforms with Nazi and White Nationalism. It is not coincidental that in response to the president’s call for American unity, the left organized “the Resistance,” appropriating a term from those who fought the Nazi occupation forces in Europe during World War II.

The father of today’s “progressive” radicals, Saul Alinsky, wrote in his Rules for Radicals that “an organizer must stir up dissatisfaction and discontent.” And that is exactly what the radical left did even before President Trump had been inaugurated as the 45th president of the United States.

As Politico Magazine reported, just six days after President Trump won the 2016 election, the Democracy Alliance, a George Soros funded dark money organization made up of 110 billionaires, met at the Mandarin Oriental Hotel in Washington, D.C. to formally organize the Resistance. If you don’t believe this, check the sources for yourself. The story was published by Kenneth Vogel in the liberal Politico Magazine on November 14, 2016. The headline says it all: Soros bands with donors to resist Trump, ‘take back power’: Major liberal funders huddle behind closed doors with Pelosi, Warren, Ellison, and union bosses to lick wounds, retrench.

After four days of closed-door meetings, the Resistance army was formed. In total there were 172 organizations, many of them already active during other leftist uprisings such as Occupy Wall Street, the anti-capitalist riots at international financial meetings, the climate protests, the anti-war and of course the Black Lives Matter protests. But one of the most active groups in meeting was an anonymous organization named “indivisible” and in an online manual they concluded that “in spite of the fact that he has no mandate, Trump will attempt to use his congressional majority to re-shape America in his own racist, authoritarian, and corrupt image.”

The usual amalgamation of leftist issues suited the organizers’ purposes perfectly. You see, with the radical left, the issue is never the issue, the issue is always the revolution. It didn’t matter that the nation had just peacefully coexisted under a black president who won reelection and served for eight years. If the character of a nation had to be destroyed in order to take back power, so be it. Soros and his cronies would not be stopped.

The election of President Donald Trump shattered the hopes of many progressives who thought they had succeeded in secularizing and guilting the most powerful nation in the world to submit to one-world-government power brokers. Instead, Trump’s stunning victory proved that the ideal of a sovereign, vibrant nation of believers remained alive and well. Faced with this reality, any crisis would do to destabilize Trump’s conservative administration, cause an uprising, and return the progressives to power to finish the job of destroying Christian civilization in America once and for all.

And so, one street protest led to another, from the rioting in New York around Trump Tower, to Madonna declaring at the pro-abortion Women’s March that “I’ve thought an awful lot about blowing up the White House.” Then came the protests against Trump’s common-sense immigration travel restrictions from failed states rife with terrorism. After that came the constant and vicious attacks of any and all of President Trump’s nominees, starting with Jeff Sessions and culminating in the #MeToo inspired attacks on Justice Brett Kavanaugh, a judge who came with a rather centrist legal pedigree and is by no means a sure vote against Roe v. Wade.

That year we also saw the manufactured crisis at the border, with NGO-sponsored caravans traversing the American continent leading to the overwhelming of immigration enforcement and the call to abolish ICE. Should we be surprised that the same people who called for abolishing our law enforcement at the border are now demanding we abolish the police?

Throughout all of these conflicts, the dark money web of the Soros-funded organizations was present in the form of community organizations, the ACLU, and of course the leading Democrat politicians and their allies in the mainstream media.

While the community activists were sowing division and calling for the overthrow of law and order, the FBI and elements within the national security agencies continued to attempt to overthrow the president and entrap his supporters. False accusation after false accusation would be leaked from “top officials” enabled by their friends in the media. And although the president was eventually cleared of any wrongdoing, the House of Representatives nevertheless proceeded to impeach him.

By 2020, the radical left was well on its way to accomplishing its task of destabilizing the country and returning to power. The country was more divided than it had been since the civil war. But one thing was still holding the nation together. The economy was booming. We might not like our neighbors all that much anymore, but people could live and let live while the going was good. With a booming economy, all the dark plans of the Soros-funded meeting in Washington, D.C. from 2016 would fail. And then the coronavirus was released by Communist China and covered up by the World Health Organization.

The human and economic ravages brought upon by the coronavirus knee-capped the economy and agitated a people not used to having their liberty taken away. But all of this made one man very happy indeed. That man is George Soros. In an interview last month, Soros gloated that “we’re now in a ‘revolutionary moment’ that allows us to achieve the ‘inconceivable’.”

Then the inevitable catalyst happened. As shown in a gruesome video that instantly went viral, George Floyd was killed by police in Minneapolis. Everyone, from the president to the local dog catcher condemned the killing of George Floyd. And almost immediately, multiple federal and state investigations into the killing were undertaken and severe charges were filed in the case against the police officers. But as President Obama’s Chief of Staff and Mayor of Chicago Rahm Emmanuel would say, you can never let a serious crisis go to waste.

Without a shred of evidence of racism on the part of the president or any other administration official, violent riots erupted around the country to protest alleged systemic racism. Instantaneously, seemingly spontaneous, but well-organized, violent and non-violent protests spread over the country. While the objectively peaceful protesters calling for an end to the coronavirus lockdown had been strongly derided by almost everyone in the media and by most politicians on the left and the center, the violent looting and rioting was being justified and excused because of the alleged collective sins of the nation. For the media and the left, the chickens were coming home to roost. As Jeremiah Wright, Obama’s spiritual mentor would state, “No, no, no, not God bless America — God damn America!”

To understand just how complicit the mainstream media and Big Tech are with the progressive leftist agenda of destabilization and anti-Americanism just do a quick experiment. Go onto google.com and search for “who is behind the protests.” As of the production of this video the first page of that search yields articles from the New York Times, the Washington Post, and The Guardian questioning the funding behind the completely peaceful re-open protests. The two articles listed on the topic of who is funding the violent George Floyd protests – one from the New York Times and the other from the Soros-funded Politifact – are written specifically to dismiss as fake news any link between the organizations running the protests and George Soros.

But even with Google’s manipulation of search results, we can still easily find plenty of information that points directly back to Soros. Remember the big donor meeting organized by the Soros-funded Democracy Alliance just six days after the November election? The president of that organization – who, by the way, was a Soros employee prior to presiding the Alliance – is a man named Gara LaMarche. In his latest post on the Democracy Alliance’s website under the president’s blog section, Mr. LaMarche openly accuses the president of the United States of “blatant racism” and directs donors to the very organizations organizing the violent protests. This is not a conspiracy theory; it is right there on their website for all to see.

As this video is being produced it is still unclear what will happen in the short term. President Trump has taken a strong position to restore law and order, but rioters and leftists protesters have been emboldened and cheered on by celebrities, the media and Democrat politicians (among which are some prominent clerics).

George Soros and his radical leftist coalition has never been closer to achieving the “inconceivable” – the destruction of the remnants of order in the United States that afford us liberty to practice our faith, and fight for a renewal of virtue and basic sanity. It’s imperative that we stand between him and his goal of a one-world government of the elites, by the elites and for the elites. To do so, we must maintain cool heads and reject getting caught up in the violence which the agitators seek to perpetrate.