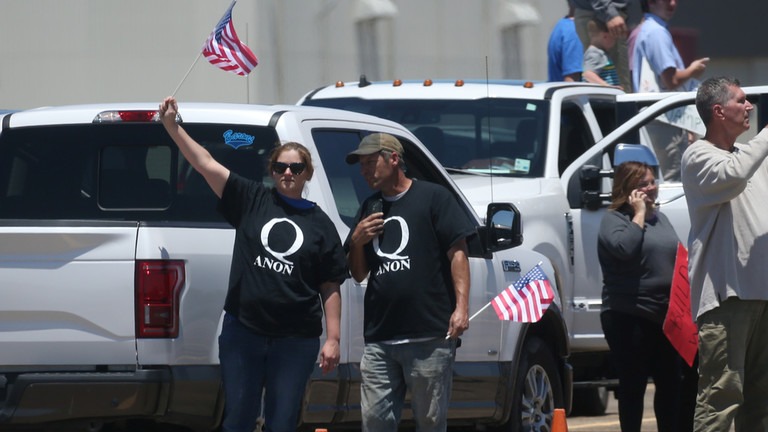 A bipartisan pair of congressmen has introduced a resolution condemning the pro-Trump QAnon conspiracy theory, denouncing the psy-op as a “dangerous, anti-Semitic, conspiracy-mongering cult.” QAnon fans took this as encouragement.

The resolution “condemning QAnon and rejecting the conspiracy theories it promotes” was introduced on Tuesday by New Jersey Democrat Tom Malinowski and Virginia Republican Denver Riggleman, citing ‘experts’ from the FBI to the Anti-Defamation League to claim QAnon adherents are anti-Semitic conspiracy theorists threatening the American way of life.

The resolution “condemns QAnon and rejects the conspiracy theories it promotes” and urges the FBI and other law enforcement agencies to “strengthen their focus on preventing violence, threats, harassment, and other criminal activity by extremists motivated by fringe political conspiracy theories.”

On top of all that, it “urges all Americans, regardless of our beliefs or partisan affiliations, to seek information from authoritative sources, and to engage in political debate from a common factual foundation.” The resolution comes on the heels of dozens of mainstream media articles calling for QAnon-related content to be censored by social media.

Echoing their hero President Donald Trump, however, QAnon adherents have argued the American media establishment is just fake news, accusing all so-called “fact-checkers” of being controlled by the likes of billionaire currency speculator George Soros, a notorious funder of liberal causes.

Reactions to the resolution were predictably polarized. Conservatives argued certain left-leaning groups – Black Lives Matter and Antifa, for example – pose a much greater danger, pointing out the country has bigger problems than a coterie of unhinged conspiracy theorists.

Liberals cheered on the resolution, but lamented social media and other entities weren’t doing enough to censor QAnon.

Facebook and Twitter have removed thousands of QAnon-related accounts and posts in the past month, part of a sweeping pre-election crackdown. Meanwhile, some in the mainstream media have recently made a heroic effort to link the conspiracy theory to the Kremlin, claiming Russian media is supporting the theories – despite an absence of evidence supporting this theory.

While the across-the-board censorship of QAnon has created something of a “Streisand effect” – in which attempted censorship perversely brings more attention to the subject being suppressed – the media establishment has not altered its line of attack. A handful of Republican candidates running for office in November have espoused belief in QAnon, much to the horror of the narrative managers who don’t realize they’re partially to blame.