You can see how afraid the British mainstream media is of the burgeoning protest movement in London based on this MSM report. 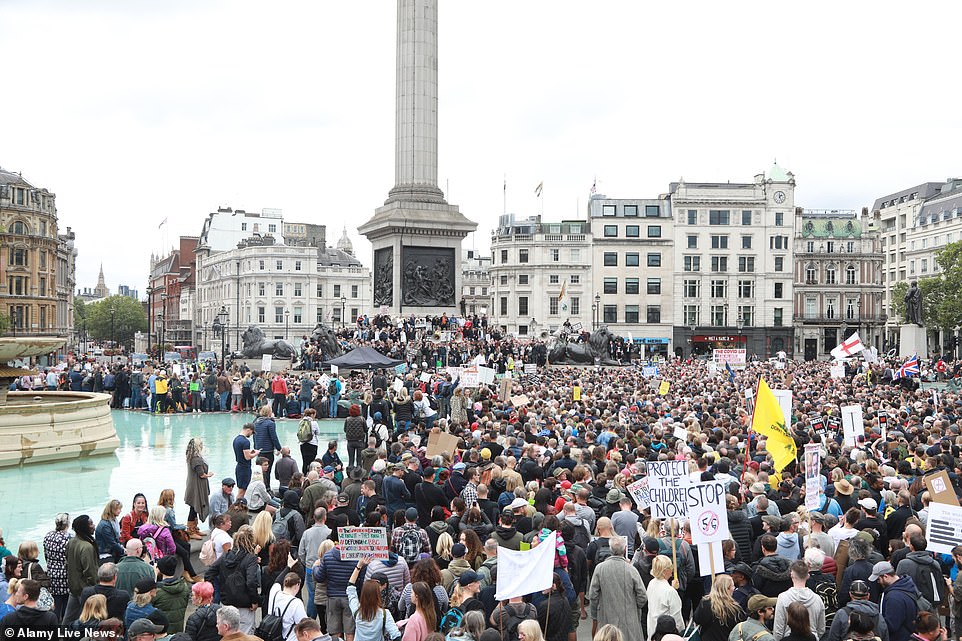 More than 10,000 Covid-19 conspiracy theorists who believe the virus is a hoax gathered in London’s Trafalgar Square to protest against lockdown restrictions and vaccination programmes

By JEMMA CARR and KATIE FEEHAN FOR MAILONLINE

Jeremy Corbyn’s brother Piers was yesterday arrested at a mass-gathering of Covid-19 conspiracy theorists who took to the streets of London to demonstrate against lockdown restrictions and vaccination programmes.

The former Labour leader’s older brother was filmed being taken away from Trafalgar Square by a gaggle of mask-wearing police officers who hauled him into a van.

It is the third time the decisive anti-lockdown figure has been arrested in just over three months. He was arrested on May 16 and May 30 while protesting in Hyde Park.

More than 10,000 anti-lockdown protesters who believe coronavirus is a hoax gathered for the ‘Unite for Freedom’ rally which started at noon in the capital on Saturday.

Demonstrators called for an ‘end to Government lies’ and the restoration of all freedoms as they marched past Downing Street towards the Houses of Parliament.

Met Police announced they arrested a 73-year-old man on suspicion of breaking the new coronavirus health protection regulations at Trafalgar Square. Met police did not release the name of the man, who remains in custody.

Onlookers flocked to social media to share pictures of Mr Corbyn being hauled into the back of a police van at the central-London tourist spot.

Pictures from the demonstration show Trafalgar Square almost full of protesters – none of whom are wearing masks – holding signs that brand the pandemic as a ‘hoax’. When full, the square holds up to 35,000 people.

Other signs claimed masks reduce immunity and likened the restrictions to ‘child torture’. One person held a homemade placard on which he had scrawled ‘no to mandatory vaccines.’

Mr Corbyn was arrested on May 16 after he used a megaphone to say ‘vaccination is not necessary’ and ‘5G towers will be installed everywhere’, adding: ‘5G enhances anyone who’s got illness from Covid, so they work together.’

There is no evidence to link 5G and Covid-19 and scientists fear that a rise in measles among children can be attributed in part to unfounded fears about vaccines.

He was then arrested again on May 30 at a protest in which he also spoke through a megaphone.

A 25-year-old man was arrested for a public order offence at the demonstration on Saturday. He was taken to a South London police station and remains in custody.

David Icke attended yesterday’s protest and urged police to ‘stop serving the psychopaths’ and join those protesting in a speech addressing the cheering crowd.

Video from the scene showed organisers label the Government ‘terrorists who are waging a war on the people of this country’.

One man says: ‘This is a political agenda to commit mass genocide on the population. That is their agenda.’

Continue reading and see many photos at:
https://www.dailymail.co.uk/news/article-8676875/Thousands-anti-maskers-believe-pandemic-HOAX-march-against-lockdown-London.html