FLASHBACK: Tucker Carlson called it right—Fauci is the ‘chief buffoon of the professional class’ 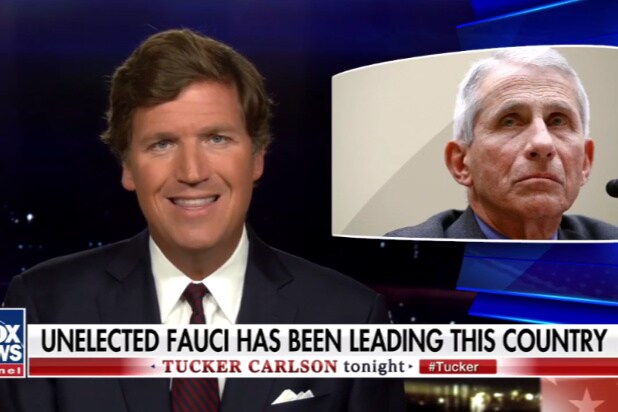 BY MARTY JOHNSON
The Hill

Carlson played a clip from an interview that Fauci, director of the National Institute of Allergy and Infectious Diseases, did with CBS on March 8, in which Fauci said that Americans didn’t need to be walking around outside with masks.

“Right now in the United States, people should not be walking around with masks,” Fauci said in the interview.

The doctor’s stance has since shifted. In front of the Senate Health Committee on Tuesday, Fauci said that he was glad to see people wearing masks.

Carlson likened people’s faith in Fauci despite his change in view to religion.

Carlson’s criticisms of Fauci echoes criticism that the physician received during the hearing. Sen. Rand Paul (R-Ky.) expressed his respect for Fauci, but said that when it comes to COVID-19 and determining when states should begin to reopen, that he shouldn’t be the “end all.”

“So I think we ought to have a little bit of humility in our belief that we know what’s best for the economy,” Paul said. “I don’t think you’re the one person that gets to make a decision. We can listen to your advice, but there are people on the other side saying there’s not going to be a surge and that we can safely open the economy and the facts will bear this out.”

Fauci responded to the senator by saying he had “never made myself out to be the end all and only voice in this.”
“I’m a scientist, a physician and a public health official. I give advice according to the best scientific evidence,” Fauci said.
Carlson also pointed out that on Jan. 21 — a day after the first case of COVID-19 in the U.S. was reported — Fauci said that the virus was “not a major threat for the people of the United States.” However, in the interview, Fauci also urged Americans to follow the guidance released by the CDC and the Department of Homeland Security.
“This is buffoon-level stuff at that point and we are not doing this to mock the guy,” Carlson continued, after playing an audio clip from April, in which Fauci said that people shouldn’t shake hands anymore.
“I mean anyone who talks as much as Anthony Fauci does is apt to say some stupid things,” he said.
In a following interview with conservative activist Ned Ryun, Carlson continued to talk about Fauci’s missteps.
“The chief buffoon of the professional class,” Carlson said of Fauci, after Ryun called the physician the “face of this failed administrative state.”
Fauci during his testimony to the Senate panel warned that states reopening their economies too quickly could produce disastrous results.
“There is a real risk that you will trigger an outbreak,” Fauci explained. He added that states that reopen their economies too fast might struggle with containing new outbreaks, only elongating the recovery time.
Reopening guidelines put forth by the White House say that a state should only begin to reopen after it has seen its daily number of new COVID-19 cases decline for 14 consecutive days. However, some states, such as Texas, have begun to reopen without meeting that benchmark.
His comments come as President Trump has been continuously adamant about returning America to work.
Some of the criticism directed at Fauci prompted Rep. Liz Cheney (Wyo.), the No. 3 Republican in the House, to defend the doctor on Twitter.
“Dr. Fauci is one of the finest public servants we have ever had. He is not a partisan,” Cheney tweeted. “His only interest is saving lives. We need his expertise and his judgment to defeat this virus. All Americans should be thanking him. Every day.”
The Hill has reached out to Fox News for comment.