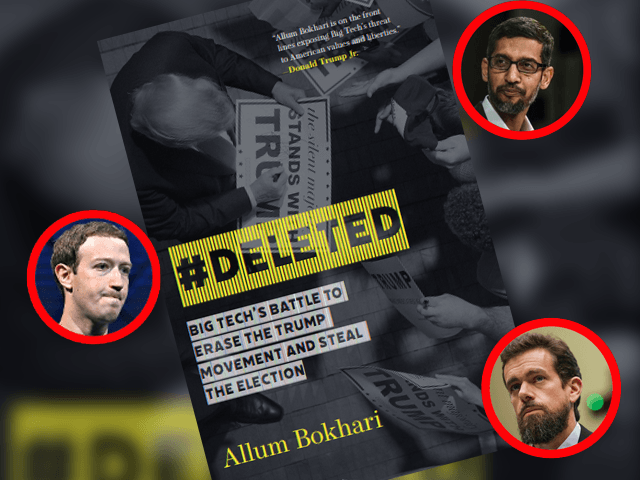 An upcoming book from Breitbart News investigative reporter Allum Bokhari is set to “shake the foundations of Silicon Valley,” according to a Big Tech source who has worked at numerous tech giants including Google.

The book, #DELETED: Big Tech’s Battle to Erase the Trump Movement and Steal the Election, will be published by Center Street on September 22, and is currently available for preorder at Barnes & Noble and other retailers.

“When voters find out what big tech companies have done to meddle in the coming election, they’ll be rightly furious” said the source, who worked on key Google products for several years.

“The level of covert manipulation is breathtaking. Every American who’s worried about the future of free and fair elections should read this book.”

The book’s author, Allum Bokhari, has worked as a tech reporter at Breitbart News since 2015. He has helped whistleblowers within Google, Facebook, and YouTube release damning leaks exposing Big Tech’s political bias.

In 2018, he obtained “The Google Tape,” a one-hour recording of Google’s top executives reacting to the election of Donald Trump in 2016. The most powerful people at the company, including co-founder Sergey Brin, CEO Sundar Pichai, and chief legal officer Kent Walker expressed dismay over Trump’s election, with Walker pledging to make the populist movement a “blip” in history.

Just over a month later, Bokhari obtained “The Good Censor,” an 85-page document from within Google admitting to Silicon Valley’s “shift towards censorship.” Sen. Ted Cruz later grilled representatives of Google about the leak during a congressional hearing.

Bokhari also revealed the existence of YouTube’s “controversial query blacklist,” a secret file used by the company to manipulate political search results. The leak revealed that YouTube adjusted search results on terms like “abortion” and “federal reserve” in response to complaints from left-wing journalists.

Sources and whistleblowers who work or have worked for Google, Facebook, Twitter, and other tech giants were extensively interviewed for the book. They reveal Big Tech’s secretive, AI-controlled methods to control and manipulate information, methods that unlike overt bans and censorship, cannot be readily observed by outsiders.

They also explain how virtually every Big Tech company was pulled to the radical left after the 2016 election, with radical elements within Google, Facebook, and Twitter now obsessively pursuing an overriding goal: stopping Trump’s reelection.