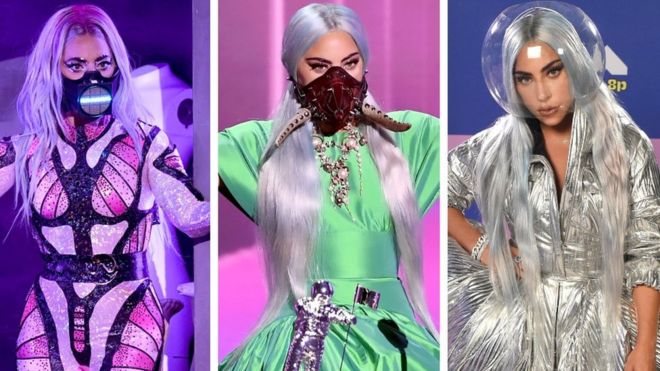 GETTY IMAGES –  Lady Gaga’s flamboyant fashion sense included a variety of masks, which she wore throughout the show

Lady Gaga led this year’s MTV VMAs, winning five awards, while BTS and Ariana Grande won four each and The Weeknd won video of the year.

The ceremony, filmed at several outdoor New York locations with a limited audience, was dedicated to the late Black Panther star Chadwick Boseman.

It included pre-recorded speeches and performances, with Lady Gaga saying: “Love who you are. Be kind. Mask up.”

Here are some key moments from the socially-distanced show, which was broadcast on Sunday night, with the full list of winners here. 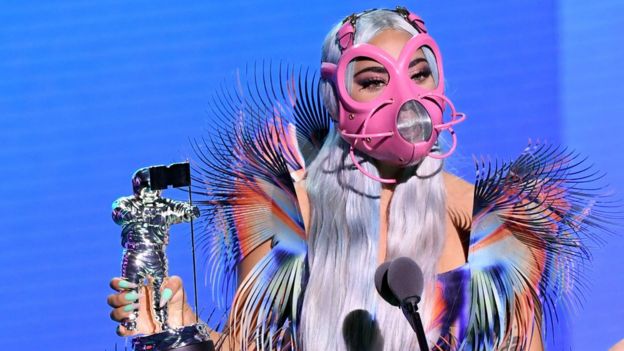 GETTY IMAGES – Lady Gaga: “I know a renaissance is coming…”

Gaga’s wins were for best artist, song, collaboration and cinematography, plus the first MTV Tricon Award – honouring her work in music, acting and fashion.

“This has not been an easy year for a lot of people, but what I see in the world is a massive triumph of courage,” she said.

“Just because we’re separated right now and culture may feel less alive in some ways, I know a renaissance is coming, and the wrath of pop culture will inspire you and the rage of art will empower you as it responds to hardship with its generosity and love. ”

Model Bella Hadid, who called Gaga a “powerhouse” as she introduced her, said: “She turns pop music into high art. She redefines fashion.. she inspires and empowers all of us.”