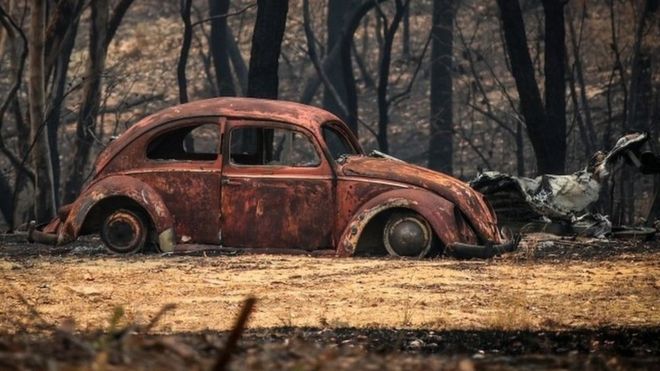 GETTY IMAGES
Image caption
The remains of a car that was destroyed by bushfires in Balmoral, New South Wales

Scores of fires are burning out of control across Australia amid a heatwave that has seen temperatures exceed 40C (104F) in every state.

The most dangerous fires on Monday were in the state of Victoria.

About 30,000 residents and tourists were urged to flee East Gippsland – a popular holiday region – but evacuations were later deemed too risky as fires encroached on major roads.

A volunteer firefighter died battling a blaze in the state of New South Wales. In total, 10 people have died in the nation’s bushfire crisis since September.

Meteorologists say a climate system in the Indian Ocean, known as the dipole, is the main driver behind the extreme heat in Australia.

What happened to the firefighter?

Authorities said the volunteer firefighter was killed and two others suffered burns after their truck rolled over in extreme winds while they were battling a blaze east of the city of Albury.

“This is awful news for the families and our sympathies are with them. These are testing times. We are so grateful for the courage and dedication of our firefighters,” he tweeted.

Prime Minister Morrison was widely criticised for being abroad on holiday at the time, and returned home early.

How bad are the blazes in Victoria?

In East Gippsland, three fires burning near the towns of Bruthen, Buchan and Bonang rapidly expanded as temperatures soared to the mid-40Cs.

Officials said the wind-driven blazes were “racing” towards the coast, and had moved faster than predicted.

Residents in northern Melbourne were told to “act immediately to survive” as firefighters struggled to battle an out-of-control fire.

Officials said the fire in Bundoora, some 16km (10 miles) north of Melbourne city centre, was “threatening homes and lives”.

“The safest option is to take shelter indoors immediately. It is too late to leave,” Victoria Emergency said.

The fire, which reportedly damaged homes in the area, was later downgraded from the emergency level.

Other emergency warnings remained in place for several fires in the state, with some urged to evacuate.

“We have had a challenging day in Victoria,” said Andrew Crisp, the state’s emergency management commissioner.

He said the huge blazes had produced their own weather systems from smoke columns “punching into the atmosphere 14km high”.

“There’s lightning coming out of these columns. It is unpredictable [and] it’s dangerous out there,” he said.

Similar fire-generated thunderstorms – or pyrocumulonimbus – were also recorded in NSW.

Lightning strikes in dry, drought-affected forests have the potential to quickly become fires that threaten lives and homes.

Dry lightning sparked at least 70 new fires in the region in the past 24 hours, officials said.

A 250km (155-mile) stretch of the Princes Highway, east of Bairnsdale, was closed on Monday.

On Sunday, Mr Crisp urged people in the region – about 280km (175 miles) east of Melbourne – to “get out”, but confirmed on Monday that many people had remained in the region.

Elsewhere in the state, a major New Year’s Eve music festival has been cancelled after organisers said the bushfire threat was too dangerous. 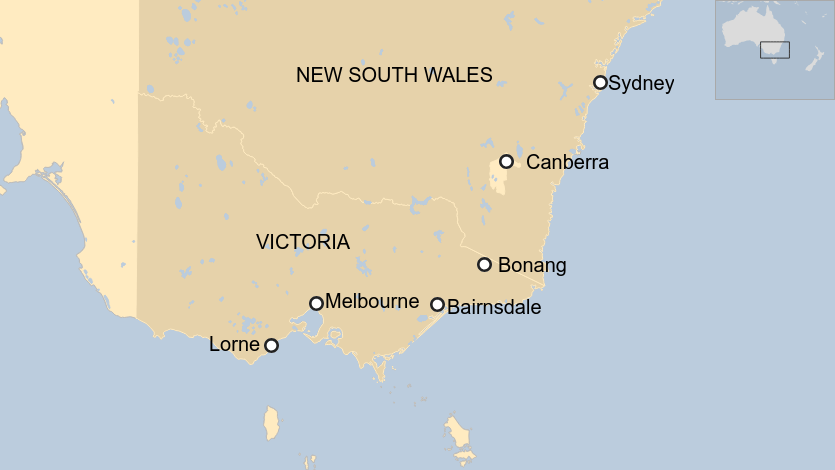 Some 9,000 people had already been camping at the Falls Festival in Lorne.

Access is by a single track, meaning it would not be possible for festival-goers to evacuate quickly.

“We are gutted to make this call but the safety of our patrons, artists and staff is our main priority,” said organiser Jessica Ducrou.

What about the other states? 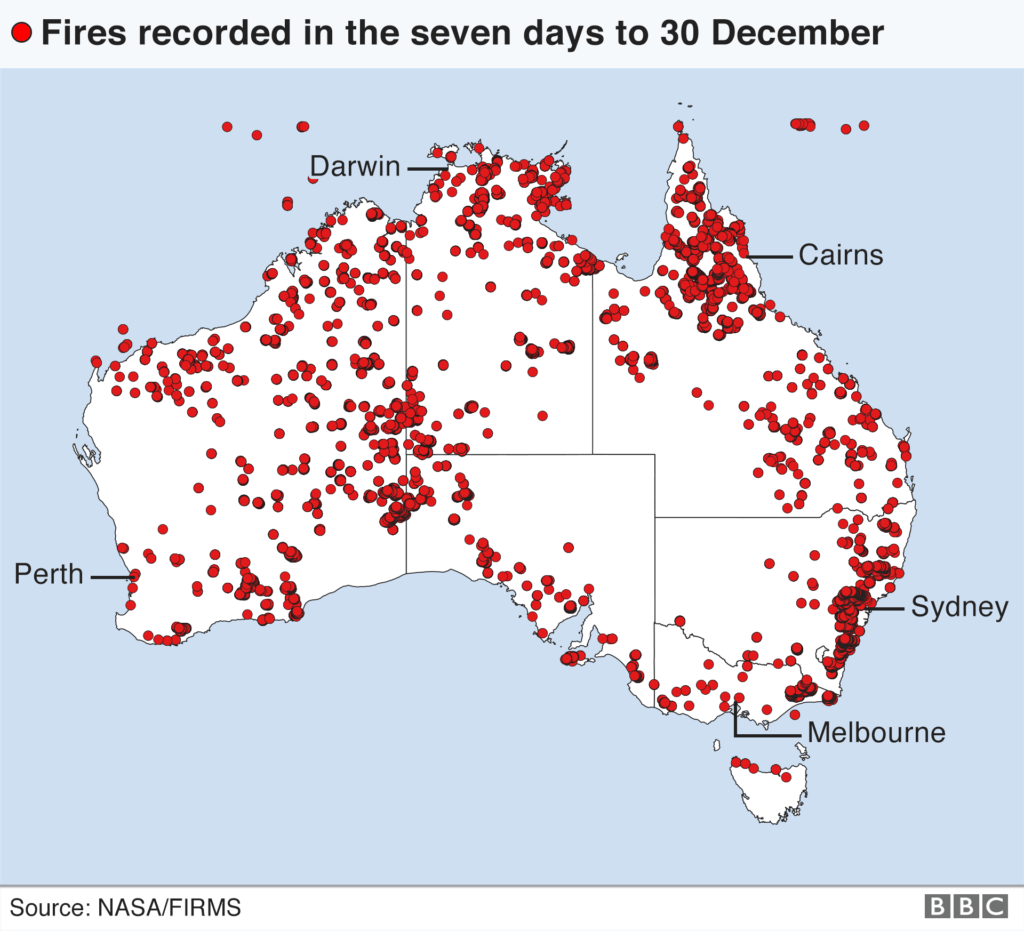 The island state of Tasmania also struggled to contain bushfires amid a sweltering heatwave.

More than 100 blazes continue to burn in NSW, the state worst-affected by the fires so far this year.

Temperatures exceeded 41C in parts of the state, including in Sydney, Australia’s largest city.

Officials have warned that “deteriorating weather conditions” could worsen bushfires in the state on Tuesday.

The town of Balmoral, south-west of Sydney, was largely destroyed on 22 December amid similar conditions.

What will happen to New Year’s Eve fireworks?

With total fire ban restrictions in place, several regions have cancelled their New Year’s Eve fireworks, including the Australian Capital Territory, where the nation’s capital city Canberra is located.

However in Sydney, authorities say the city’s harbour fireworks display – watched by millions around the world – will go ahead despite criticism.

More than a quarter of a million people have signed a petition calling for the fireworks to be cancelled and the money spent on fighting fires.

The city’s authorities say the cancellation would have little practical effect on affected communities.

Details of a bushfire relief fund will be projected on the Sydney Harbour Bridge during the night.

Across Australia, the fires have destroyed at least four million hectares (9.9m acres) in five states since September.