Posted on September 5, 2020 by State of the Nation

By KEITH GRIFFITH FOR DAILYMAIL.COM 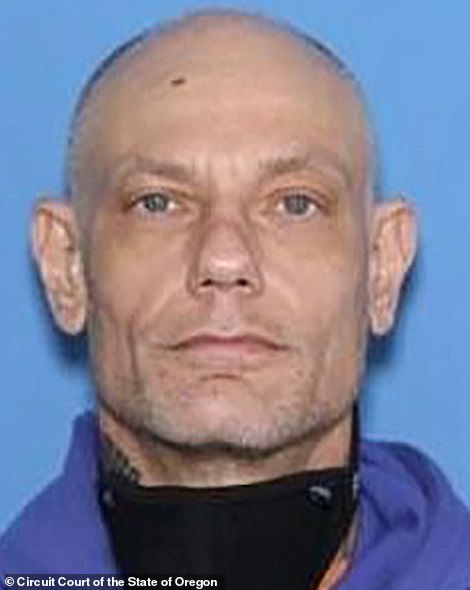 Michael Forest Reinoehl, 48, was wanted for murder before he died in a shootout with police on Thursday

Prosecutors have released new surveillance images from the murder of a far-right activist in Portland, after the prime suspect, a far-left Antifa supporter, was killed in a shootout with U.S. Marshals.

The warrant charges Reinoehl with murder in the death of Aaron ‘Jay’ Danielson, 39, who was gunned down in the streets of downtown Portland on Saturday.

The court documents reveal startling new information in the case, including that Reinoehl appeared to lie in wait for Danielson before the shooting, and sent text messages to his own son offering to trade marijuana for a handgun weeks before the murder.

The warrant also indicates that the victim himself was armed with a handgun, which was found in his waistband after he died, and did not appear to have been fired during the incident.

In the warrant affidavit, Portland Police Detective Rico Beniga describes the events leading up to the shooting, based on witness statements, previously released bystander video, and surveillance video from a nearby parking garage, images of which are being released for the first time publicly.

At first, Reinoehl was walking with a white female southbound on SW 3rd Avenue, and both could be seen staring eastbound down perpendicular Adler Street as they crossed the intersection. 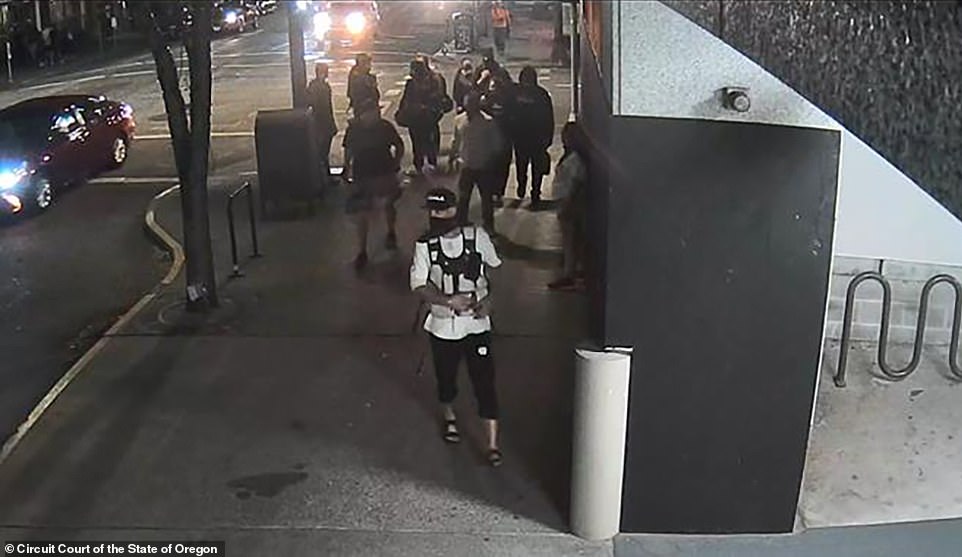 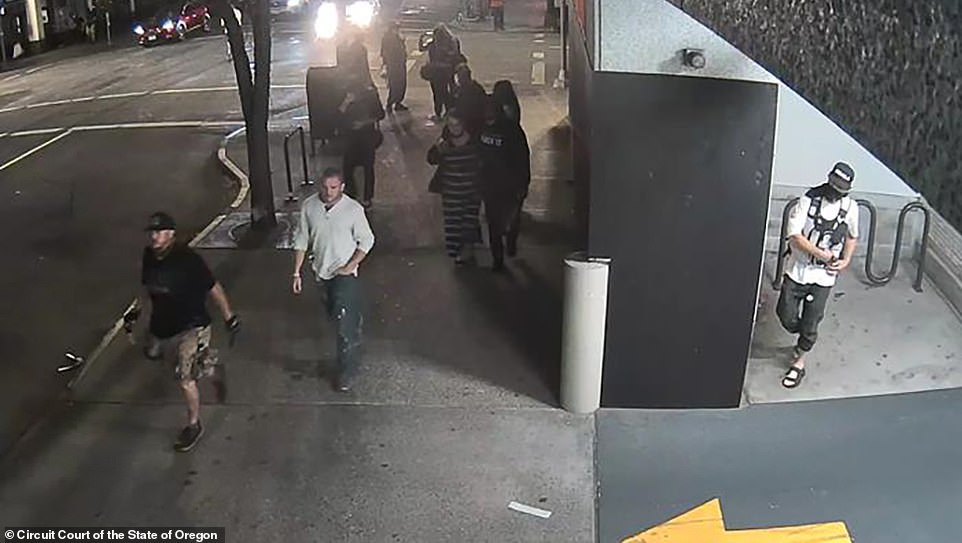 After Reinoehl and the woman cross the intersection,  the white female pauses and stands against a building as Reinoehl continues walking.

Then, Danielson and Danielson’s friend Chandler Pappas are seen turning a corner behind them from Adler Street. Reinoehl is seen glancing behind him and reaching for his waistband.

Reinoehl then ducks into the entrance of a parking garage ‘and reaches toward his left front waist area,’ the affidavit states.

Beniga notes that Danielson appears to be carrying a can of bear mace in one hand, and a telescoping baton in the other.

After the two men, who are wearing hats of the right-wing group Patriot Prayer, walk past, Reinoehl emerges from the parking garage and appears to be reaching for his waistband.

Danielson and Pappas turn right to cross SW 3rd Avenue, and Reinoehl and another unidentified man, described as Subject #2 in the affidavit, together follow them, walking out of the security camera’s field of view. 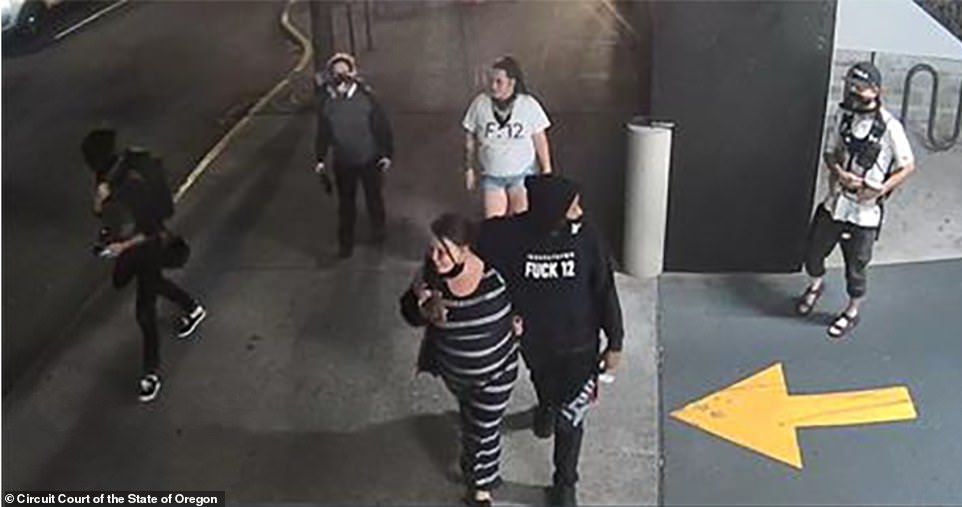 After Danielson and Pappas (not pictured) pass, Reinoehl (right) reaches for his waistband and joins up with ‘Subject #2’ (center in black) to follow the two right-wing activists 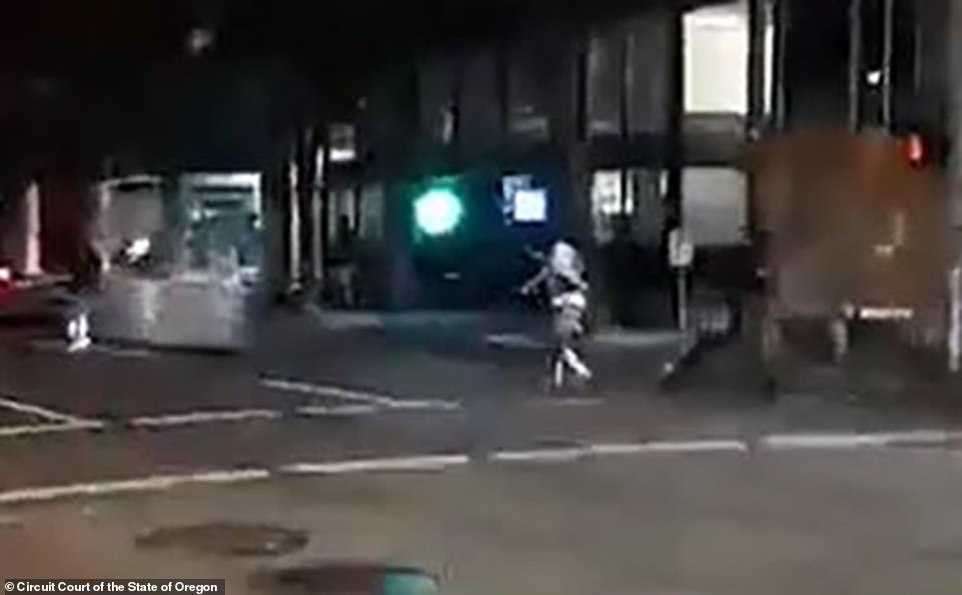 Reinoehl is seen with his right arm extended as a cloud of bear mace erupts by Danielson and Pappas. Police say Danielson’s can of bear mace was punctured by a bullet 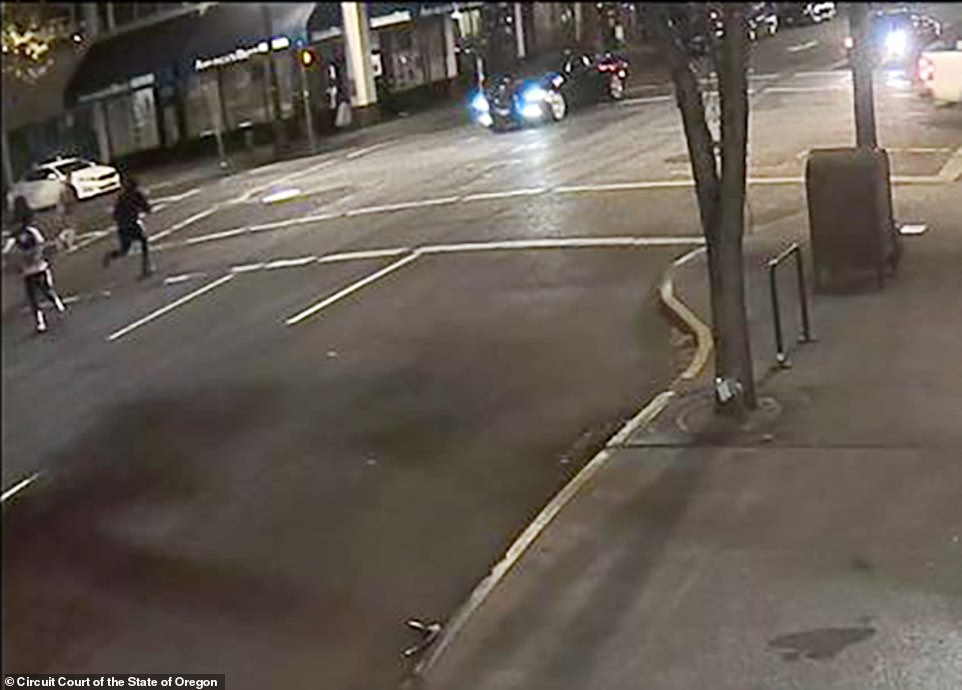 Immediately after the shooting, Reinoehl (in white) and Subject #2 (in black) run away from the scene