Posted on September 5, 2020 by State of the Nation 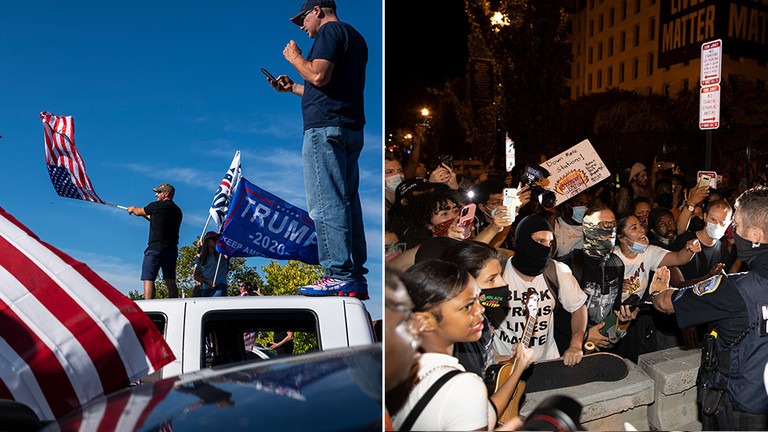 (L) Trump supporters wave flags during a rally in support of the president on August 29, 2020 in Clackamas, Oregon. © Getty Images/Nathan Howard; (R) Washington DC Police try to keep Demonstrators back as they gather at Black Lives Matter plaza on August 27, 2020 © Getty Images/Tasos Katopodis

By Rachel Marsden, columnist, political strategist and host of an independently produced French-language program that airs on Sputnik France. Her website can be found at rachelmarsden.com

Donald Trump and Joe Biden, whether they are aware of that or not, are both effectively using CIA-style psychological warfare tactics on American voters. This manipulative practice is anything but democracitc.

“Guerrilla warfare is essentially a political war.” So begins the preface of the CIA’s Psychological Operations in Guerrilla Warfare manual, written in the early 80s to help the agency’s warfare proxies – the Honduras-based Nicaraguan Contras.

The manual was designed to be a blueprint for recruiting Nicaraguan citizens to the US-backed Contra’s cause and to mobilize them against the pro-Soviet Nicaraguan government led by Sandinistan President Daniel Ortega at the height of the Cold War.

As in Nicaragua, psychological manipulation by the American government of foreigners in faraway lands to either do its fighting or to accept the end result of a regime change war has long been standard operating practice.

In Syria, for example, the US employed opposition proxies, widely characterized and marketed by the American government as “Syrian rebels,” in an attempt to mobilize opposition for regime change against President Bashar Assad. The plot, coined Operation Timber Sycamore, has been called “one of the costliest covert action programs in the history of the CIA” by the New York Times. The failure, estimated at a billion dollars, complemented a similar Pentagon train, fund, and equip operation that transformed into yet another boondoggle. This time, it had a $500 million price tag.

For all that spending, Washington succeeded in creating a fleeting illusion that lasted just long enough for some people to be fooled into thinking that there was widespread, active domestic opposition to Assad.

In order for the illusion to actually succeed, however, it has to gather enough of a critical mass of support and momentum among the general population in a short enough time to spark regime change. These days, this is rarely ever the case anymore, if only because modern technology allows for the dissemination of counter-narratives that mitigate any efforts to build the sort of groupthink required for regime change.

Although common practice abroad, use of CIA-style psychological warfare against Americans themselves has been frowned upon in principle. For instance, the Smith-Mundt Act is deliberately supposed to prevent State Department propaganda disseminated overseas from targeting Americans within the nation’s own borders. But American presidential elections always end up flooding American public discourse with polarizing propaganda in the interest of obtaining or maintaining power.

In the current electoral matchup between President Donald Trump and Democratic challenger, former Vice President Joe Biden, each is effectively using CIA-style psychological warfare tactics on American voters – whether the candidates themselves are aware of it or not.

Insecurity – law and order – is now one of the top issues of this campaign, and could very well be the deciding factor in the election.

Both Biden and Trump are trying to portray the other as unable to keep America safe. Trump has repeatedly pointed to unrest in “Democrat-run states” that would spread across the entire country in “Joe Biden’s America.” Biden, for his part, has accused Trump of being responsible for fostering insecurity through inflammatory rhetoric. Each has accused the other of dog whistling to extremist proxies – violent leftwing Antifa actors or rightwing radicals.

But what impact is this having on voters?

“Armed propaganda improves the behavior of the population toward its author, and it is not achieved by force,” states the CIA psyops manual. “This means that an armed guerrilla unit in a rural town will not give the impression that its weapons are a force that they hold over the peasants, but rather that they are the strength of the peasants against the repressive Sandinista government.”

People are less frightened by guerrillas who they feel are on their side and defending their values. This explains why each candidate has been more careful when denouncing violent extremists who support their own politics while unhesitatingly slamming those who don’t.

Trump himself has conspiratorially claimed in a recent interview that people in “dark shadows” control Biden, and has referred to armed vigilante, murder suspect, and Trump rally attendee, Kyle Rittenhouse, as having acted in self-defense.

The message is that it’s mayhem in the Democrat-run streets and Trump’s proxy army are the good guys victimized by Antifa.

Meanwhile, Biden has benefited from, and has leveraged, the mass protest movements spearheaded by the left for what they perceive to be Trump’s encouragement of violent policing. He has comforted their frustration by holding Trump himself and his loyalists responsible for “sowing chaos” and “stoking violence,” while nonetheless paying lip service to denouncing acts of violence.

Both candidates are holding at a distance the proxy groups that answer the clarion call to serve their political agenda in the same way that other militant groups overseas have taken up arms and action on behalf of a perceived prophet.

“Little by little, sowing the seed of democratic revolution, in order to change the vices of the regime toward a new order of justice and collective well-being,” is one of the primary tactical objectives cited in the CIA psyops manual. These tactics are anything but “democratic.” They’re manipulative. They play on people’s fear. And they shouldn’t decide free and fair elections.