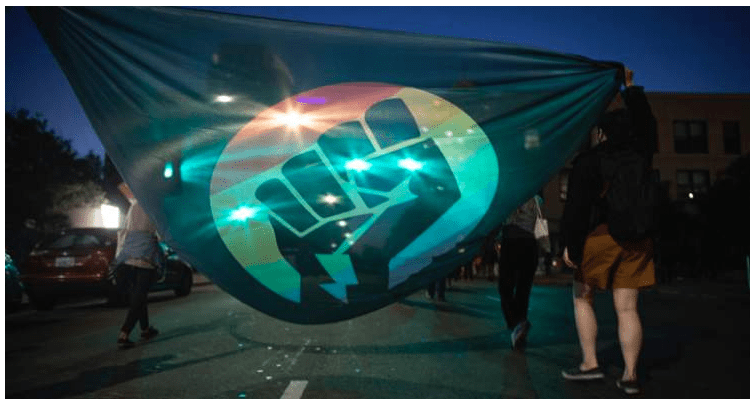 For those unfamiliar with the Revolutionary Communist Party (RCP), it is one of the most violent, hardcore Maoist organizations in the United States, infamous for street fighting, rioting, and physical assaults on the police. Its veteran cadres have played an important role in riots over the decades, including the 1992 Rodney King riots that devastated Los Angeles and dozens of other cities, and the current wave of destruction that has been wracking America for the past several months.

Despite their well-known and documented history of violence and its promotion of insurrection and revolutionary overthrow of capitalism and the United States government, the RCP and RefuseFascism have no problems promoting their criminal, subversive agenda via Facebook, Twitter, and Instagram.

But the RCP/RefuseFascism thugs are not the only revolutionaries that are promoting the Antifa/BLM riots with the apparent blessings of the “progressive” globalist billionaires that run Big Tech’s TwitFaceGoogYou social media empire.

Additional organizations and websites that are notorious for promoting Antifa/BLM and for providing coordination are: the Freedom Road Socialist Organization, the Workers World Party, the Black Rose Anarchist Federation, Jacobin magazine, CrimethInc, It’s Going Down, EnoughIsEnough, NonCopyriot, Revolutionary Organizing Against Racism (ROAR), and many others. All of them boast Facebook and Twitter accounts, not to mention accounts with YouTube, Instagram, Tumblr, Pinterest,  Mastadon, and more.

Over the past several years, the political correctness censors at TwitFaceGoogYou have grown increasingly brazen in their enforcement of left-wing orthodoxy by demonetizing, shadow banning, and deplatforming conservative, pro-life, pro-2nd Amendment, and pro-Trump websites, articles, and videos. Alex Jones, Candace Owens, Prager U, and Project Veritas are but a few of the many examples that could be cited of blatant political bias exercised by the Big Tech giants against outspoken conservative individuals and organizations. (See the articles linked below at the end of this report.)

On February 17, 2017, when President Trump tweeted his famous charge accusing the “Fake News” of being “the enemy of the American People!,” tens of millions of Americans stood up and cheered, because finally a leading American political figure had dared to speak truth to power and call out the blatant liars and subversives of the media industrial complex. He stated: “The FAKE NEWS media (failing @nytimes, @NBCNews, @ABC, @CBS, @CNN) is not my enemy, it is the enemy of the American People!” The truth of that tweet was so transparently obvious and resonated so powerfully with so many Americans that it sent shock waves through the globalist establishment.

Of course, President Trump did not intend the short list of media entities in his tweet — nytimes, NBCNews, ABC, CBS, CNN —  to be construed as  a comprehensive listing, as his subsequent tweets and statements have shown. There are, literally, hundreds of media outlets that qualify as “Fake News” and as enemies of truth and freedom, as well as enemies of the American people.

The blatant ongoing bias against conservatives by Twitter, Facebook, Google, YouTube, and other social-media companies, and their simultaneous support for those promoting revolution, insurrection, sedition, and rioting, show that they also are in the enemy camp. If the Antifa/BLM criminals incite more riots and destroy more urban centers on September 5, a way must be found to hold the TwitFaceGoogYou radicals accountable, including stripping these social-media titans of the immunity against legal liability they are unfairly granted under Section 230 of the Communications Decency Act of 1996.