The Weather Underground terrorists are finally winning the ongoing communist revolution…or have they?

Posted on September 7, 2020 by State of the Nation

The Revolution Is Winning 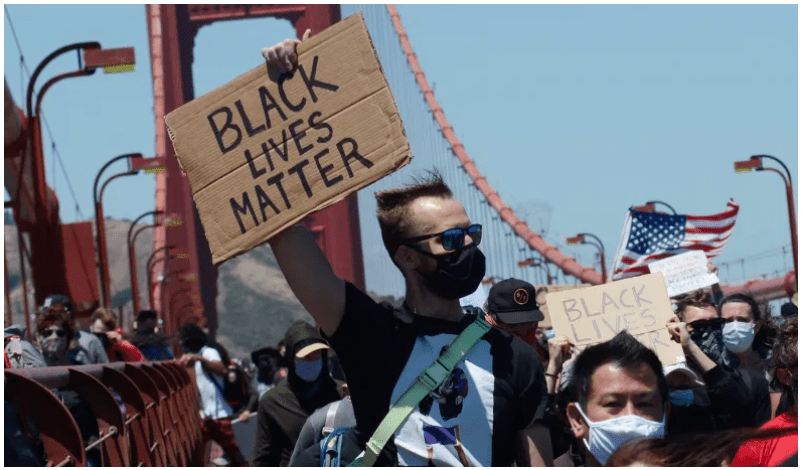 Demonstrators march during a protest against racial inequality in the aftermath of the death of George Floyd, San Francisco, Calif., June 6, 2020. (Kate Munsch/Reuters)

Weather Underground terrorists, who made no secret of being anti-AmeriKKKan “small-c” communists, are having more success than they could have dreamed of in the 1960s.

They are dominating the language. You know that whole “white privilege” nostrum that we’re paying universities $60K per year to drum into our children’s brains? It is derived from their lamentation of “white skin privilege.” In their ideology, the revolution to overthrow the capitalist, racist, imperialist system summoned them — lily white radicals — to abandon their privilege and embrace the armed struggle.

Among their most influential thinkers was Bill Ayers. He got a windfall from the government’s failure to prosecute him for the bombings he carried out and the mass murders he planned but was insufficiently competent to execute. It was a second career as a “Distinguished Professor of Education” at the University of Illinois. As Sol Stern relates in a 2006 City Journal essay that should be required reading today, this entailed designing curricula used by today’s hard-Left academics, based on what Ayers saw as a moral imperative to convert schools into social-justice indoctrination labs.

Of course, in the days before they brought the revolution into the classroom, they pursued it on urban streets, prioritizing war on cops. To the avant-garde, the police are the pointy end of the oppressive government spear, enforcing its laws and imposing the racist society’s caste system. For the revolution to succeed, the police have to be discredited, defunded, and defanged. For the Weather Underground, that meant branching into such radical offshoots as the May 19 Communist Organization and conspiring with black separatists.

So it was that such Weather confederates as Susan Rosenberg, Kathy Boudin, and David Gilbert, among others, teamed with the Black Liberation Army to carry out the infamous 1981 robbery of a Brinks armored truck at the Nanuet Mall near Nyack, N.Y. At the time, Rosenberg was already a suspect in the 1979 New Jersey jailbreak of Joanne Chesimard, also known as Assata Shakur, a Black Liberation Army leader who had been convicted of murdering New Jersey state trooper Werner Foerster. Chesimard fled the country and was given asylum by Fidel Castro’s Communist regime in Cuba, where she has lived ever since.

In robbing the Brinks truck, the terrorists shot at the security guards, murdering one of them, Peter Paige. In a firefight with Nyack police while trying to escape, they killed Sergeant Edward O’Grady and Officer Waverly Brown — the latter a Korean War veteran who had joined the force in 1966, the first African American to serve in Nyack’s police department. Rosenberg went on the lam, finally captured three years later in possession of over 700 pounds of explosives she and her fellow radicals were planning to use in additional mayhem. A federal judge in New Jersey sentenced her to 58 years’ imprisonment.

Boudin and Gilbert had left their 14-month-old son, Chesa, with a sitter in order to participate in the Brinks heist. But unlike Rosenberg, they were captured right after the bloody shootouts. Boudin was sentenced to a minimum 20 years’ imprisonment (with a maximum life sentence), and Gilbert to 75 years’ imprisonment.

With his parents in custody, young Chesa Boudin was raised by their confederates, Ayers and Bernardine Dohrn. Like Ayers, Dohrn was a Weather Underground leader who became an academic after eluding significant prosecution for their bombings and mass-murder conspiracies — though she did do a short stint of jail time for contempt after defying a grand-jury subpoena to testify about Rosenberg.

In addition to his American academic work, Ayers became a supporter of the late Communist dictator Hugo Chávez’s education programs in Venezuela. There, in a 2006 speech with the strongman looking on, Ayers proclaimed, “Teaching invites transformations, it urges revolutions small and large. La educación es revolución!” Later, Chesa Boudin would follow in Ayers’s footsteps, working as a translator and think-tank researcher for Chávez’s regime.

Meanwhile, in Chicago, Ayers and Dohrn seamlessly became prominent in Democratic Party politics. At their Hyde Park home in 1995, they held a coming-out party for an ambitious political unknown, a community organizer named Barack Obama. Two years later, the future president breathlessly endorsed Ayers’s polemic, A Kind and Just Parent?, as a “searing and timely account.” The book is an indictment of the U.S. criminal-justice system, which Ayers likens to South Africa under apartheid. As Stanley Kurtz has recounted, Ayers helped pave Obama’s way into the radical Left’s extensive fundraising networks; the two collaborated as board members of the Chicago Annenberg Challenge, doling out more than $100 million to community organizers and education “reformers.”

Susan Rosenberg’s terrorism sentence was commuted by President Bill Clinton in 2001, part of the scandalous array of clemency grants on his last day in office. (I was then a senior federal prosecutor and had just spent months successfully arguing against her release.) Instantly, she was offered teaching positions at John Jay College of Criminal Justice and, later, Hamilton College, though protests by parents and alumni forced the first to be short-lived and the second declined.

Not to worry, though. By 2020, she was recruited to become vice-chair of the Board of Directors at Thousand Currents, after years as an “activist” in the thriving fields of criminal-justice “reform” and prisoners’ rights. (In the media-Democrat complex and on the campus, former terrorists who’ve found new ways to march the revolution through our institutions are transmogrified into “social-justice activists”). Like the Chicago Annenberg Challenge, Thousand Currents is a grant-making foundation of the radical Left, similarly tapped into its fundraising networks — such groups as the W. K. Kellogg Foundation (a deep-pocketed non-profit that promotes racial causes and also supports the Tides Foundation and George Soros’s Open Society Foundations, among other heavyweight donor organizations) and the NoVo Foundation (funded and controlled by the Buffett family).

The principal organizational framework for BLM is the Black Lives Matter Global Network Foundation, run by three women: Opal Tometti, Alicia Garza, and Patrisse Cullors — the last of whom, in a 2015 interview, observed, “Myself and Alicia in particular are trained organizers. We are trained Marxists. We are super-versed on, sort of, ideological theories.”

Since George Floyd’s killing by Minneapolis police in late May, BLM has been flooded with donations. Its operations are opaque, however, and it has not qualified for non-profit status. To navigate around this inconvenience, the BLM Global Network Foundation is sponsored by Thousand Currents, which has non-profit status — meaning donors can make tax-deductible contributions to Thousand Currents, which, in turn, supports BLM. The arrangement appears to trace back to 2016, when the Kellogg Foundation provided Thousand Currents with $900,000 for “building the infrastructure and capacity of the national #BlackLivesMatter to support and strengthen their local chapters’ organizing capacity.”

Like Rosenberg, Kathy Boudin has landed on her feet. David Gilbert remains in custody serving his murder sentences (though, as his Wikipedia bio indicates, he has achieved the coveted “activist” status), but Boudin was granted parole in 2003. I know you’ll be stunned to learn that Columbia University quickly rolled out the red carpet for her to pursue a doctorate at Teachers College. She is now not only an adjunct professor at Columbia’s School of Social Work, but also a co-founder and co-director of its, yes, “Center for Justice.”

Meanwhile, Chesa Boudin, the son of Boudin and Gilbert raised by Ayers and Dohrn, is a rising political star. Just 39, he has authored the memoir Gringo: A Coming of Age in Latin America, studied at Oxford on a Rhodes scholarship, gotten a law degree from Yale, completed a stint in a big-city public defender’s office, and, just last year, been elected that city’s chief prosecutor —  district attorney for San Francisco.

Boudin’s candidacy was backed by the Left’s financial network, BLM, and such luminaries as Communist icon Angela Davis and Senator Bernie Sanders (I., Vt.), the avowed socialist, who appears to be the most influential supporter of the Joe Biden presidential campaign. At the victory party the night of Boudin’s election, ecstatic supporters chanted “F*** POA!” (i.e., the Police Officers Association). He had run on a platform of ending what he sees as undue law-enforcement focus on people of color, thwarting federal action against “undocumented” immigrants, and prioritizing investigations of — not by — the police.

He’s making good on these promises. For example, he has stopped bringing charges that include a sentencing enhancement California’s legislature enacted to curb gang violence, fretting that it is disproportionately applied to people of color.

Just a few weeks ago, moreover, he announced a new initiative: The district attorney’s office will no longer charge cases that rely on information from police officers said to have engaged in misconduct — including excessive force or racial bias. Of course, while police must on occasion use superior force in order to subdue criminals, we’ve seen in recent months that any law-enforcement use of force is now liable to be condemned as excessive. And racial bias, even in the absence of proof of conscious discrimination, is claimed to be “unconscious”; it is derived from statistical voodoo that scrutinizes the race and ethnicity of suspects in police encounters while studiously ignoring the offensive behavior that may have prompted police action. Boudin explained that his office has established a “Trial Integrity Unit,” which is compiling a list of cops as to whom there have been misconduct claims. The list is to be updated regularly.

That is, it is an ongoing, open-ended investigation of the police department, for the benefit of criminals.

The goals of the revolution have never changed. It has simply airbrushed its terrorist leaders into prominent public scholars and “activists” with a passion for “change” and “justice.” The revolution has lots of money, organization, control of the schools, support from one of the nation’s two major political parties, and the media megaphone. That is why the revolution is winning. The 1960s never ended, they just paved the way for today.