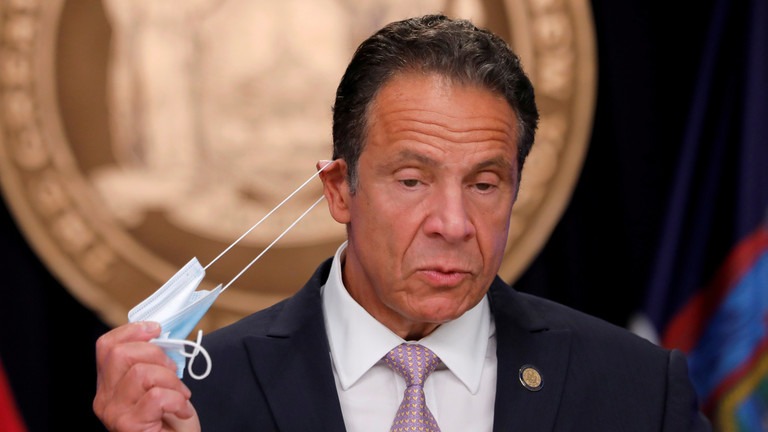 New York’s abysmal pandemic performance is everyone’s fault but his own, Governor Andrew Cuomo has seemingly argued, blaming the ‘incompetence’ of others, from Dr Fauci to President Trump.

“Donald Trump caused the Covid outbreak in New York,” Cuomo said twice at a press conference on Tuesday. “That is a fact. It’s a fact that he admitted, and the CDC admitted, and Fauci admitted.”

Trump called it a “Chinese virus” and didn’t ban travel from Europe in time, Cuomo argued, calling the Centers for Disease Control and Prevention (CDC), the National Institutes of Health (NIH) and the Department of Homeland Security (DHS) “incompetent” for allegedly missing the threat from overseas.

“And now, they won’t provide federal funding to help repair the damage from the ambush they created,” the governor lamented.

This was presumably a reference to Trump’s order last week to cut federal funding from jurisdictions that refused to crack down on riots and anarchy over the summer, which had already prompted Cuomo to threaten the president physically.

“Every time New York and New York City has needed something, President Trump has delivered,” White House spokesman Judd Deere said in a statement, responding to the governor’s claims. “The only people trying to harm New York City are the liberal politicians and their failed big government policies.”

Criticism of Dr Anthony Fauci, head of the National Institute of Allergy and Infectious Diseases, has previously been frowned upon in the mainstream media, but Cuomo apparently got a pass – just as he did with his response to the outbreak.

Cuomo has insisted on the European origins of the coronavirus outbreak since May, but boasted of his supposed success in defeating the pandemic in June. Last month, he announced a book about “leadership” in battling the virus – also accusing Trump of “ambushing” New York by not cutting off travel from Europe sooner.

Left out of this narrative are inconvenient facts, such as the widespread condemnation of Trump’s travel ban from China, or the insistence of New York officials there was no danger from the virus at the time – or Cuomo’s own policy of sending the infected into nursing homes, which has contributed to at least 6,600 deaths, and perhaps even up to 11,000.

In late March, Cuomo himself insisted that he would sue Trump if he tried to impose a quarantine on New York and the surrounding states.