The FBI really has become the enemy of the people!

FBI says reports of Antifa arson in Oregon are ‘CONSPIRACY THEORIES,’ but someone is starting fires 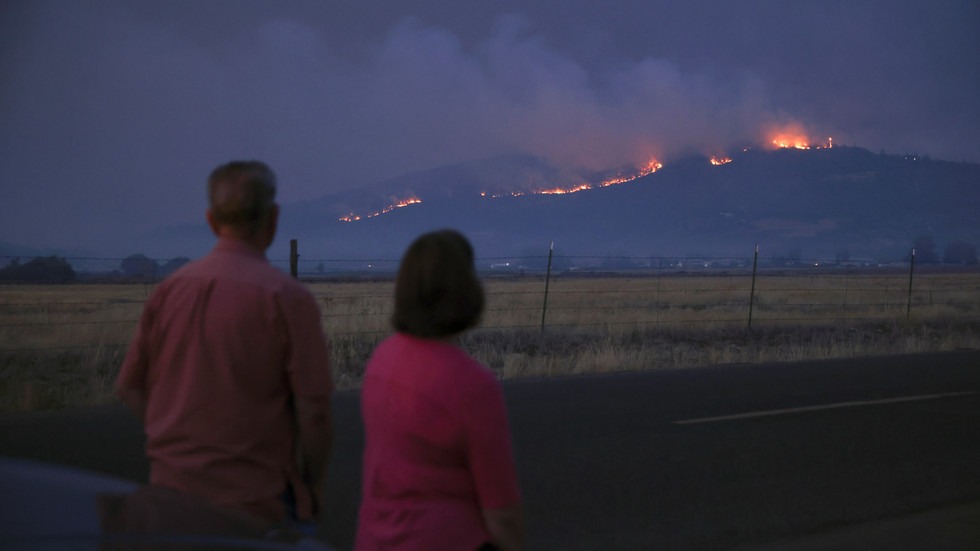 As wildfires burn throughout Oregon and close in on Portland, a number of arrests and reports suggest that some of these fires may have been started intentionally. The FBI has dismissed reports of arson as “conspiracy theories.”

As wildfires burn throughout Oregon and close in on Portland, a number of arrests and reports suggest that some of these fires may have been started intentionally. The FBI has dismissed reports of arson as “conspiracy theories.”

Multiple wildfires are ripping through Oregon, with local media reporting seven dead as of Friday. Governor Kate Brown has evacuated more than 40,000 people, and the state’s emergency management director, Andrew Phelps, said on Friday that authorities are preparing for a “mass fatality event.”

Phelps also warned that the fires are “knocking on the doorstep” of Portland. With the sky over the city blotted out by ash and smoke, Mayor Ted Wheeler declared a state of emergency on Thursday night.

Portland has been an epicenter of ‘Black Lives Matter’ and antifa riots since May, and rumors circulating online have accused some of these activists of starting the fires intentionally. The FBI attempted to squash these rumors on Friday, declaring them “conspiracy theories and misinformation,” and urging citizens to only share “validated information from official sources.”

However, reports of arson have not come solely from anonymous Twitter accounts and conspiracy cranks. Hours after the FBI’s tweet was posted, the Multnomah County Sheriff’s Office announced that deputies had discovered spent fireworks next to a bush fire in Corbett, a few minutes’ drive from Portland.

Multiple suspects have been arrested and charged with arson within the city itself, with the arrestees usually linked to the ongoing protests and riots. Previously, Molotov cocktails have been thrown at police officers, buildings set on fire, and powerful fireworks launched at federal agents protecting the city’s Justice Center and courthouse.

However, law enforcement officers have caught several arsonists outside Portland too. A man was charged on Friday with multiple counts of arson after allegedly setting a wildfire near Phoenix in southern Oregon on Tuesday. Officers arresting the man found him standing near a large blaze that was threatening several houses, and discovered two ounces of methamphetamine on his person. His political leanings are unknown.

In central Oregon, a 44-year-old man was arrested on Tuesday on suspicion of arson, with deputies accusing him of torching nearly 400 acres of land west of the city of Eugene.

While law enforcement officials say they’ve been flooded with false calls blaming the fires on Antifa arsonists, a fire that began in Ashland is under criminal investigation after human remains were found at its origin point. The fire quickly spread, and merged with the same blaze that the alleged Phoenix arsonist was arrested and charged for starting.

Further north in Washington state, a man was charged on Friday with starting a fire alongside a rural highway two days earlier. The suspect, identified as 36-year-old Jeffrey Acord, live-streamed his arrest on Facebook, but denied starting the fire. Acord had professed support for Black Lives Matter on Facebook, and had previously been arrested with a cache of weapons at a protest in Seattle in 2014.

It is not known, however, if his alleged fire-starting on Wednesday was politically motivated.