Navalny obviously wasn’t poisoned by Russia, he was chemically assaulted by the Zio-Anglo-American Axis to kill the Nord Stream 2 Pipeline

How the Poisoning of Alexey Navalny Turned Merkel Against Putin

What Western officials describe as a botched attempt to kill a leading Kremlin critic has triggered a new downward spiral in Russia’s ties with Europe. 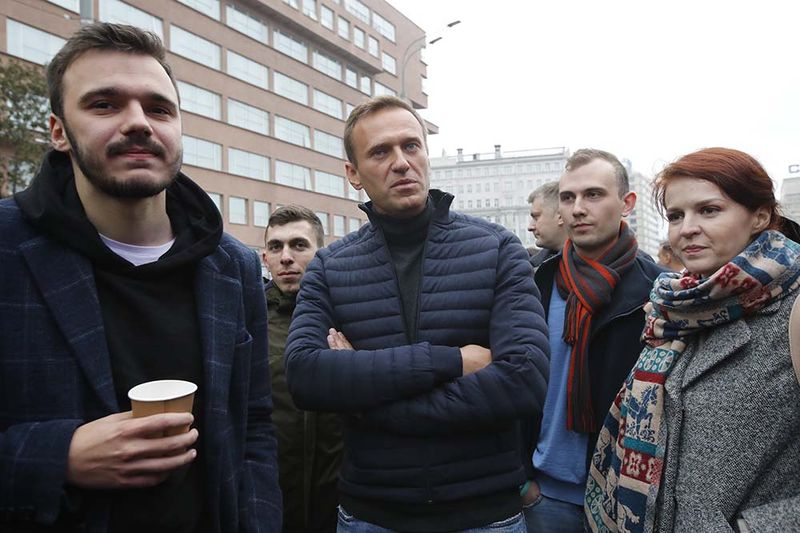 Alexey Navalny’s team was at breakfast in the Siberian city of Tomsk when they received word that the opposition leader had fallen violently ill on his flight home to Moscow.

The activists raced to the room in the Xander hotel he’d left hours before and scrambled to collect evidence. “It was obvious to us that Navalny hadn’t just gotten a bit sick,” they recalled in an Instagram post Thursday. “We decided to take everything that might be of use.”

A plastic Svyatoi Istochnik (‘Holy Source’) water bottle they picked up would weeks later be found by a German military lab to have traces of Novichok, the weapons-grade nerve agent first developed by the Soviets. The use of a banned chemical weapon in the Aug. 20 attack has left German authorities with little doubt that the operation was ordered from the highest levels of the Russian government, according to three officials in Berlin familiar with the findings.

Quick action by the pilot of his flight to make an emergency landing and the medical personnel that first treated him likely saved the 44-year-old’s life, German officials and his colleagues said. The sloppiness of his would-be assassins left a trail of evidence pointing to the Kremlin that Berlin could not ignore.

What Western officials call a botched attempt to kill a leading opposition figure has triggered a new downward spiral in Russia’s ties with Europe, and above all with German Chancellor Angela Merkel, whose patience had already been tested by President Vladimir Putin. Her government was grappling with how to respond to a 2015 cyberattack on the Bundestag and a 2019 killing in Berlin, both of which were ordered by Russian state actors, German prosecutors say.

Even against the Kremlin’s track record of malfeasance, the brazen targeting of a chief critic would be devastating to Putin’s already low standing in the West, a European diplomat said.

The Kremlin says it found no proof Navalny was poisoned and has rejected Merkel’s calls to open a criminal investigation. Russian officials have presented a variety of conflicting accounts of what may have happened, ranging from claims Navalny was merely sick to suggestions he was poisoned after he was taken to Germany in a medically induced coma for treatment days after the attack.

Western officials dismiss those claims. Calling on Moscow to answer for the attack, the European Union and others are weighing a response that could range from expelling Russian diplomats to more painful economic sanctions. Merkel has suggested she could even take action against the 9.5-billion-euro ($11 billion) Nord Stream 2 pipeline to carry Russian gas to Germany.

Known for his YouTube videos exposing official corruption and targeting the ruling party, Navalny has long been a target for Kremlin ire. Putin and other top officials go to elaborate linguistic lengths to avoid saying his name in public. Putin’s spokesman calls him “the Berlin patient.”

But while over his years of activism, he’s been repeatedly jailed for weeks at a time and attacked on the streets by opponents — at one point nearly losing sight in one eye — the poisoning attack marks the first clear attempt on his life.

The Kremlin has a long and deadly history of using such weapons to go after those who fell out of favor, with mixed success. The 2018 attack on former spy Sergei Skripal in Salisbury, U.K., didn’t kill him, but sickened several others and killed one bystander who came into contact with the Novichok.

The attack on Navalny took place in the heart of Siberia, where he would seemingly have been an easier target for assassins from the Federal Security Service, or FSB, whose agents had been following his every move for years, according to his allies.

Navalny and his team were in Tomsk filming a video about local corruption ahead of regional elections, hoping to mobilize supporters to defeat the ruling party. A few of the team had stayed with the camera crew to finish shooting while Navalny with several others went back to Moscow.

Shortly after the aircraft took off, however, Navalny was stricken, screaming in pain and losing consciousness, according to witnesses and video from the flight. The crew asked if any doctors were aboard and made plans for an emergency landing in Omsk, the nearest city.

As they descended, the airport tower warned them that a bomb threat had been phoned in to the terminal. But the pilots weren’t fazed, asking for the ambulance to be dispatched directly to the runway.

Had the plane continued its 4.5-hour flight to Moscow, Navalny could have died, according to allies.

On the ground in Omsk, medical personnel quickly read his symptoms as poisoning and rushed him to the toxicology ward. He was administered atropine, the only drug effective against agents like Novichok.

Back in Tomsk, police still hadn’t secured his hotel room even as news of his illness spread around the world. Navalny’s colleagues took the water bottle and other evidence and headed for the airport to make their way to Germany, where they hoped he’d be taken for treatment.

“The FBK brilliantly outplayed the FSB,” opposition politician Vladimir Milov wrote on Twitter, referring to the Russian initials of Navalny’s Anti-Corruption Foundation. “They took evidence from under their noses (a bottle with Novichok from the Tomsk hotel) and got it out of the country.”

Vladimir Uglev, an expert from the team that developed the poison decades ago, said he suspects the Novichok was put on the water bottle in an effort to kill Navalny during the flight or shortly after. “The people who did this calculated everything down to the smallest detail, but they failed to take into account one crucial thing: the human factor,” he said.

Officials initially refused to allow Navalny to be flown to Germany, delaying the private jet that had come to fetch him long enough that its crew had to spend hours longer resting under aviation-safety rules. But by Saturday morning, less than 48 hours after falling ill, he was flown to Berlin by a private group backed by Merkel’s government.

Medical tests at the Charite hospital in the heart of the German capital quickly showed that Navalny had been poisoned with a cholinesterase inhibitor, a category of chemicals that includes pesticides, medications and nerve agents.

Days later, the German military’s Institute for Pharmacology and Toxicology, one of the few laboratories in the world with first-hand knowledge of the toxin, made the Novichok conclusion. That Wednesday morning, Merkel gathered six top cabinet members to inform them — and agreed that a swift response was necessary. Police tightened security around the hospital, fearing another attempt on his life.

For Merkel, a self-described Russophile who grew up in East Germany, a deep well of patience had been emptied. Her message to the Kremlin was blunt by her standards.

“It’s clear that Alexey Navalny is the victim of a crime,” Merkel told reporters gathered hours later. “The intent was to silence him.”