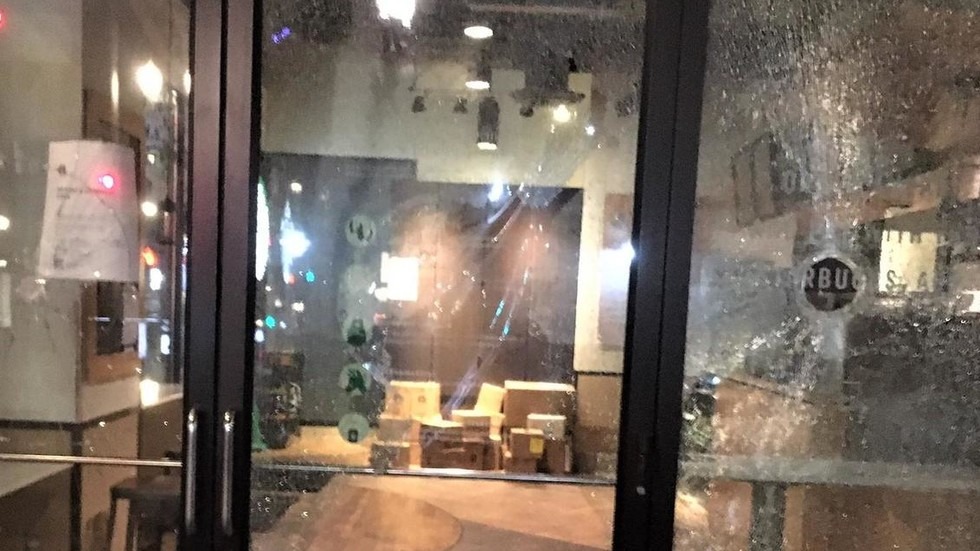 Several hundred people smashed up storefronts, torched American flags and harassed motorists in Portland, Oregon, following a brief lull in nearly nightly riots due to wildfires tearing through the state.

Around 200 demonstrators marched through the city on Saturday night, with some individuals smashing windows and applying graffiti on buildings. A bank, a restaurant and a Starbucks coffee shop were among the businesses targeted, the Portland Police said in a statement. No arrests were made, but the acts of vandalism are under investigation.

Protesters were also filmed burning an American flag as they chanted “black trans lives matter.” In another incident, they torched a pro-police ‘thin blue line’ flag as they shouted “blue lives splatter.”

Elsewhere in the city, online footage shows demonstrators stopping a truck and then ordering one of its passengers to raise his fist and say “black lives matter.” The vehicle’s windows were reportedly later smashed by the protesters.

Portland’s chaotic streets had quietened down due to poor air quality resulting from nearby forest fires, but protests resumed earlier this week. On Friday, 11 people were arrested after demonstrators targeted an Immigration and Customs Enforcement (ICE) facility in the city.

Oregon’s biggest city had previously seen more than 100 consecutive nights of racial injustice protests following the death of George Floyd at the hands of the Minneapolis Police in May.