Disgraceful, even if it was a joke 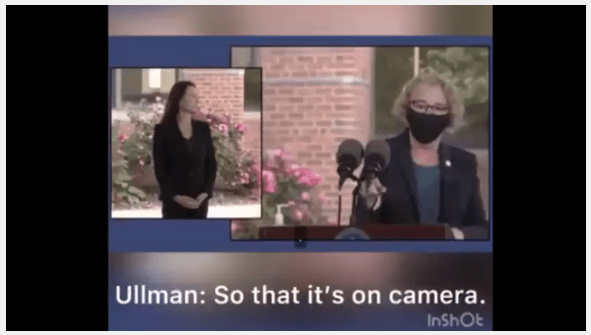 What did they say?

The two officials were preparing to take part in a news conference in Doylestown, Pennsylvania, Tuesday, when Wolf remarked to Ullman that he would be removing his mask when speaking onstage. At the time, Ullman was standing near the microphone with her mask still on.

Ullman then walks toward Wolf and off camera, responding, “I will as well, just, I’m waiting so that we can do a little political theater.”

Wolf replies, “OK,” as the two officials share a laugh and Ullman walks back toward the podium. She then adds for clarification: “So that it’s on camera.”

Of course, it’s possible that the two Democrats were joking about the situation. TheBlaze reached out to both officials for comment about the exchange, but neither have yet replied.

Even if they were joking, however, it’s unlikely that such an excuse would satisfy Pennsylvanians, who have been living under some of the harshest coronavirus restrictions in the country.

Earlier this month, a federal judge actually ruled that the state’s burdensome lockdowns, put in place by Wolf and Secretary of Health Dr. Rachel Levine, were unconstitutional.

There has been swift backlash

One Twitter user replied to a post made by Ullman, saying, “I enjoyed your political theater, meanwhile families and businesses suffer.”

Another wrote: “Pelosi, Feinstein, now this. Rules for thee, but not for me.”

The mayor of Slippery Rock, Pennsylvania, Jondavid Longo, blasted Wolf and Ullman’s actions, saying, “The destruction of the livelihoods of millions of Pennsylvanians is no laughing matter and we don’t find this entertaining.”