Nearly Half a Billion Animals Feared Dead From Australia’s Fires, Including 8,000 Koalas

Ecologists from the University of Sydney estimate that 480 million mammals, birds, and reptiles have been killed. 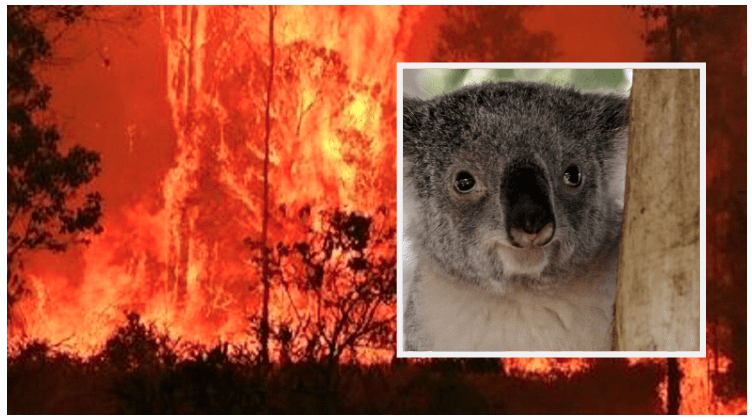 (TMU) — Nearly half a billion animals are feared to have died as historic bushfires continue to devastate vast regions of Australia, including almost a third of koalas in their main habitat in New South Wales (NSW).

According to one report from the the Sunday Times, ecologists from the University of Sydney estimate that roughly 480 million mammals, birds, and reptiles have been killed either directly or indirectly by the horrific inferno that has been sweeping across the country since September.

The number includes about 8,000 koalas that were burnt to death along the mid-north coast of the state, which lies 240 miles north of Sydney.

On Friday, federal environment minister Sussan Ley told ABC radio that up to 30 percent of the koalas in the region had been killed, a number equivalent with the amount of their habitat that had been consumed by the fires. So far, about 12.35 million acres (five million hectares) has burned throughout the crisis. The official noted that she’s been hard at work trying to establish corridors and plans to release hospitalized animals. She added:

“We’ll know more when the fires are calmed down and a proper assessment can be made.”

While numerous scientists have sought to debunk earlier suggestions that koalas have been rendered “functionally extinct” as sensationalistic and exaggerated, the species is still faced with a grave threat by the unprecedented fires stoked by strong winds and a brutal heatwave.

Earlier in December, ecologist Mark Graham of the Nature Conservation Council told a state parliamentary inquiry that koalas typically “really have no capacity to move fast enough to get away” from the massive and fast-moving crown fires that spread across treetops. He added:

“The fires have burned so hot and so fast that there has been significant mortality of animals in the trees, but there is such a big area now that is still on fire and still burning that we will probably never find the bodies.”

We’ve lost such a massive swathe of known koala habitat that I think we can say without any doubt there will be ongoing declines in koala populations from this point forward.”

Over 100 fires are currently raging across Australia, with volunteer firefighters joining efforts to minimize damage and rescue the beloved koalas. On December 19, two volunteer firefighters were killed as they battled the blazes in NSW. Nine people have died in total, with one person missing and 800 homes destroyed.

“I get mail from all around the world from people absolutely moved and amazed by, number one, our wildlife volunteer response, and also by the habits of these curious creatures.”

Regions devastated by the fires include the Greater Blue Mountains World Heritage Area and portions of the Gondwana rainforests, the most extensive subtropical rainforest in the world which has existed since the time of dinosaurs.

Since September, a GoFundMe page for the hospital has received over $1.4 million USD ($2.175 million AUD)—an all-time record in terms of funds raised for an Australian entity, according to Newshub.

On the political front, the Australian government headed by Prime Minister Scott Morrison has faced withering criticism for taking his pre-Christmas vacation in Hawaii while the country confronts this massive emergency, resulting in the trending hashtag #WhereTheBloodyHellAreYou.

The country is heavily reliant on coal power and the government has been accused of avoiding taking action on climate change, obstructing global summits on climate change, and even skirting its obligations under the 2015 Paris accord.

Along with the fires, arid conditions due to a prolonged drought have wrought heavy damage on the livelihoods of farmers and local economies.

Scomo hulas while Australia burns. My cartoon in the Fin @FinancialReview this morning. pic.twitter.com/rHXxF34c9r