SPIKE IN BOYCOTTS OF TURKISH GOODS
AND SERVICES; CONSUMERS CITE
WARMONGERING AS CAUSE

Six days into the renewed attacks by the Azerbaijan-Turkey-Israeli axis on Armenia and Artsakh, many countries have come forward to denounce the warmongers.

But none of these condemning nations has yet to put any meaningful actions behind its words.

Consequently, everyday people who have stakes in the conflict — or are simply upholding their values — are imposing their own sanctions upon these rogue states.  Enter the consumer boycott.

A term used to describe the withdrawal from commercial or social relations with a country, organization, or public figure as a form of protest or punishment, a boycott can be effective because anyone can participate.   One need not hail from the corridors of power to make an impact. 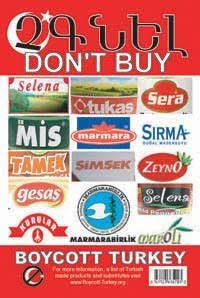 According to the Boycott-Turkey.org and Boycott-Turkey.net campaign (websites hijacked – this is a partial mirror site), “probably one of the most powerful weapons individuals have to effect political change is their consumer purchasing power.”

For years, Turkey has injected itself, often militarily, into the sovereign affairs of Iraq, Syria, Lebanon, Libya, Greece, Cyprus, India, and now, Armenia and Artsakh. On October 2, reports emerged that Turkey is using NATO and American facilities to attack Armenia and Artsakh.  Since NATO is unable or unwilling to rein in this rogue nation that many consider to be the single greatest threat to global security, public boycotts are increasingly gaining favor.

Against the backdrop of war, public disapproval for Turkish-made goods has intensified in Armenia again. Armenians recognize that Turkey’s involvement in this war will allow it to complete the Armenian Genocide.

The Republic of Armenia announced on October 1 that its supermarkets will no longer carry Turkish products. Merchants and importers are choosing other trade partners.

Since the renewed attacks on Armenia, communities in the Armenian Diaspora have also seen a resurgence in Turkish products and services boycotts.

Boycotting Turkey has been relatively consistent over the generations as Armenians as a rule refuse to support Turkey’s economy which has already enriched itself through confiscated Armenian national wealth and territory after launching the Armenian Genocide with no reparations or sanctions in sight.

Armenian-American activist Shunt Jarchafjian is on a mission to educate his fellow Armenians about the products they might see at their local markets. He pointed out that Tukas tomato paste was owned by the Turkish Armed Forces Pension Fund. He says that if someone bought that product from 1967 to 2014, the purchaser contributed to the tax revenue of the Republic of Turkey, and helped fund the retirement of the soldiers serving in the Turkish Armed Forces. He also adds that the Ulker processed foods company sits atop an Armenian cemetery confiscated by the Turkish government during the Armenian Genocide. He makes a point of explaining how the Turkish military and government have tormented the Armenians year after year, and how consumer consciousness counts.

Some activists are also demanding the suspension of support of all cultural exchange programs organized to foster so-called “reconciliation” initiatives between Turkey, Azerbaijan and Armenia.

According to Bloomberg News, the Turkish lira “plunged to successive record lows in September,” that is, since the Armenia/Artsakh invasions, with 7.83 lira to the dollar. As many aggrieved groups are simultaneously boycotting Turkey, the country may be feeling the squeeze economically.

In July 2020, communities of Greece and Greek Cyprus doubled down on their decades-long boycotts of Turkish products and tourism in response to the unresolved Turkish Genocide of Hellenes, Armenians and Assyrians and the 1974 Turkish invasion of Cyprus.  Their new initiatives are in response to Turkey’s highly-contested conversion of the UNESCO-protected Christian Orthodox Cathedral of Hagia Sophia into a mosque and Turkish illegal drilling incursions into the Eastern Mediterranean.

Turkey under Erdogan may attempt to justify his many foreign interventions in a bid to realize his dream of restoring the Ottoman Caliphate. However, Turkey’s relationship with the Muslim world is also not as ironclad as Erdogan may wish to have it appear.  Mahmoud Zahran, a researcher specializing in Turkish affairs, said “the success of boycott campaigns would reveal how unpopular Erdogan’s regime is in a region where he has tried to paint himself as a leader.”

At the end of September, Saudi Arabia announced a ban on all Turkish goods. The Saudi Kingdom has been at loggerheads with Turkey over the contested murder of exiled Saudi journalist Jamal Khashoggi and the status of the Qatar peninsula.  According to the Turkish newspaper Dunya, the Saudi government has ordered individual businesses not to trade with Turkish companies or buy any products made in Turkey, and has imposed fines on companies that do not comply.

A Turkish boycott campaign in also in effect in Egypt. In January of this year, MP Ismail Nasr El-Din called on the government to impose a boycott of Turkish products, services and tourism “in response to the blatant transgressions by the Turkish government in the region, and its attempts to plunder the wealth of the Middle East, spread chaos, and destabilize the Middle East.” MP Omar Sumaida, head of the Congress Party, said “we launched a campaign to boycott Turkish products, and our party has developed plans to educate citizens to boycott Turkish products in all offices affiliated with the party across the country.” As early as 2013, a number of Egyptian TV channels stopped airing Turkish soap operas and dramas, to protest Turkish intervention in the Middle East.

These popular boycotts intensify the existing Arab League boycott. Many Arab countries cannot afford the high cost of retaliating militarily to Turkey’s incursion into northern Syria, and so are opting for economic sanctions as defense.  “An Arab boycott of Turkish products would significantly hurt Ankara’s economy. Turkish exports to the Arab world total more than $30 billion annually, representing 18.3% of its overall exports, according to the trade data website, Trade Map.

Iraqi Kurds such as Jwnaid Murad, owner of Las Market in Erbil, have a boycott of Turkish products in effect. “Of course, boycotting goods will affect my business. But after watching Turkey commit the war crimes they have in Rojava, I don’t care,” he said. “If I had to choose between starving to death and eating food produced by Turkey, I would starve.” Iraqi Kurdish boycott organizer Hamid Banyee of Sulimaniyeh says “We’re expanding the campaign to include all parts of society, which will be a fatal blow to the Turkish economy,”

The Turkish lira has been in sharp decline since 2017, including increasing inflation, Turkish economists say. Sergey Dergachev, senior portfolio manager at Union Investment, believes that the geopolitical choices made by Turkey have contributed to the financial freefall.

Few know that since 1992, independent Armenia has endured an illegal economic blockade by Turkey and Azerbaijan for standing by the Armenians of Artsakh. In fact, Turkey has been running one of the longest and biggest boycott operations of all time which includes occupying and confiscating the ancestral Armenian homeland for a thousand years. Thus, Armenian-made products rarely leave Armenia for export. At the same time, Turkey has been exporting its own cheaper goods to Armenia through the Republic of Georgia, an act which presented the needy of Armenia with reason to abandon their own more expensive products for Turkish ones.

Turkey has no diplomatic relations with Armenia and refuses to establish them until Armenia gives up Artsakh, accepts the boundaries agreed upon in the disastrous 1921 treaty of Kars between Kemalist Turkey and Soviet Russia (there is no official agreement over these borders between independent Armenia and the Republic of Turkey), and promises to stop pursuing international recognition for the Armenian-Greek-Assyrian Genocide of 1915.

Says Armenian-American activist Joe Sifatsouz, “Most Turkish restaurants outside Turkey are subsidized by the Turkish government, which might explain why there are so many of them. When a friend has a yen for kebabs, tell him or her to enjoy the variations made by neighborhood Armenian, Assyrian, Cypriot, Egyptian, Greek, Kurdish, Lebanese, Syrian, Palestinian, Indian, or Iraqi restaurants instead.”

But individual resolve is seen as only one aspect of the issue. U.S. President Trump once said he was ready to halt a $100 billion dollar trade deal with Turkey over its hubris in Syria. “If the superpowers are sincere about curbing the Turkish menace, they should stop hiring Turkish construction firms, break bilateral tax treaties and remove Turkey companies from U.S. Stock Exchange listings,” added Sifatsouz. “Right now, Turkish businesses abroad must pay their host countries as well as Turkey’s Internal Revenue Administration. Removing obligatory taxes to the Turkish state — and other large-scale economic sanctions — will bring Turkey to heel.” 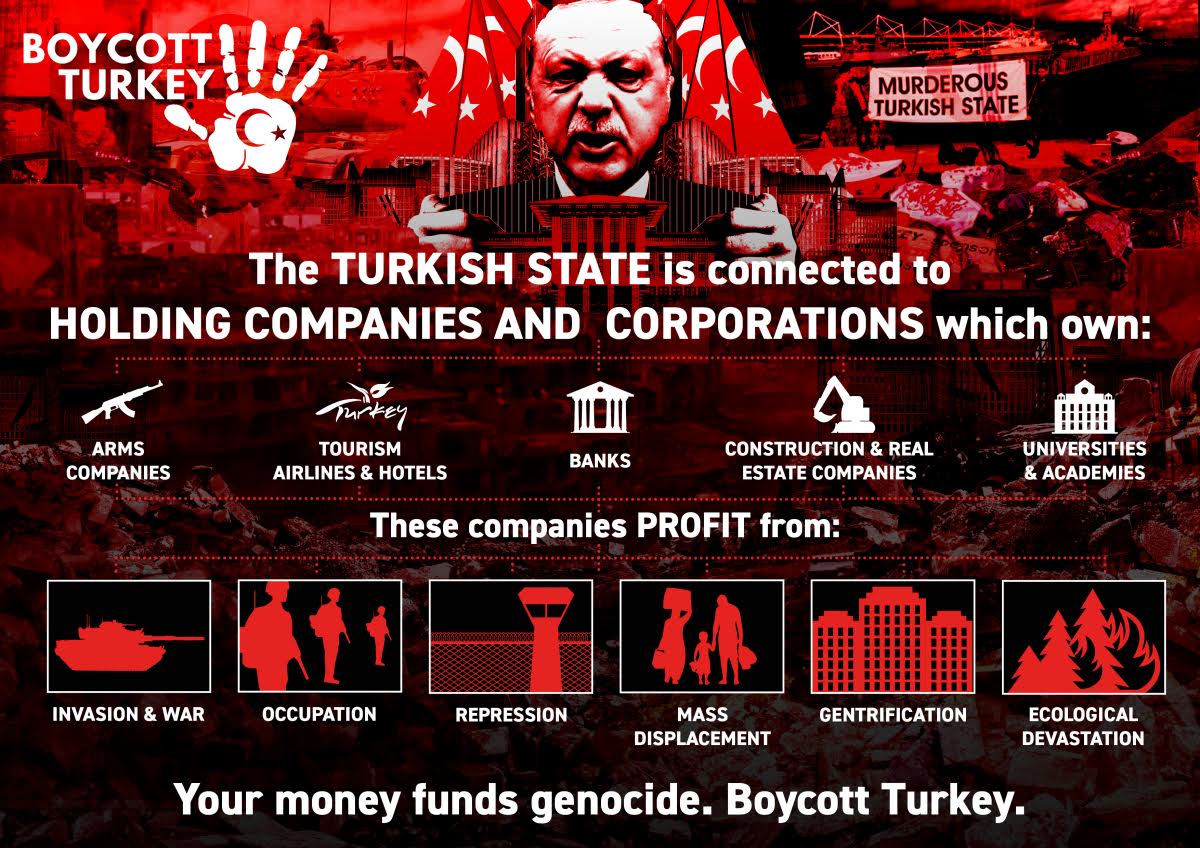 Lucine Kasbarian is an Armenian-American journalist and editorial cartoonist. Many of her articles are archived at www.armeniapedia.org/wiki/Lucine_Kasbarian