Why is no one talking about the 90% false positives where it concerns the POTUS and First Lady? 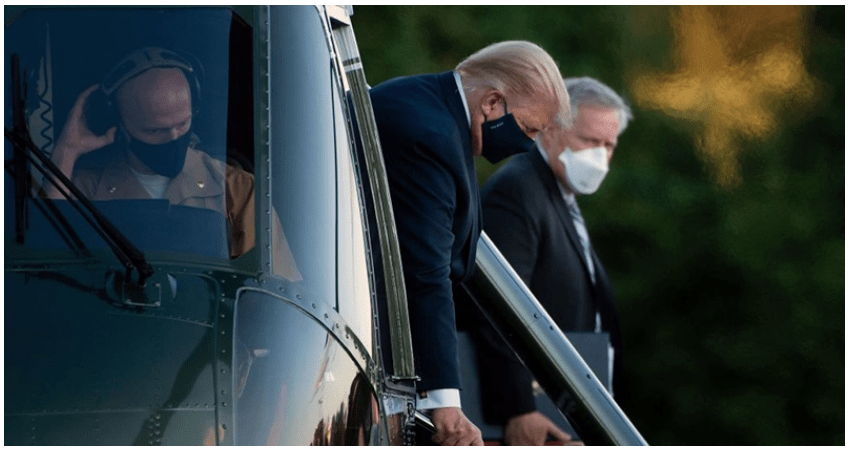 President Trump is not taking hydroxychloroquine, despite his positive COVID-19 diagnosis and precautionary hospitalisation.

President Trump, and First Lady Melania, both tested positive for COVID-19 on Thursday. “The White House medical team and I will maintain a vigilant watch, and I appreciate the support provided by some of our country’s greatest medical professionals and institutions,” said White House physician Navy Commander Dr Sean Conley in a statement at the time.

Despite numerous reports from respected public health bodies acknowledging that up to 90% of those testing “positive” for coronavirus may be wrongly diagnosed, no one is asking whether that could be case when it comes to President Trump’s COVID-19 infection.

On Friday, President Trump was taken into Walter Reed National Military Hospital, following his positive test. Dr Conley said in a statement that the President was “fatigued but in good spirits,” while the First Lady has “a mild cough and headache.” The President posted a video to Twitter thanking the American people for their support.

“President Trump remains in good spirts, has mild symptoms, and has been working throughout the day,” said Kayleigh McEnany, the White House Press Secretary. “Out of an abundance of caution, and at the recommendation of his physician and medical experts, the president will be working from the presidential offices at Walter Reed for the next few days.”

A further statement from Dr Conley on Friday revealed that President Trump had not been prescribed the drug hydroxychloroquine, which he has so often touted as being useful and effective in treating COVID-19 infections. He has instead been prescribed zinc, vitamin D, famotidine, melatonin, and aspirin, and has halso taken “a single 8 gram dose of Regeneron’s polyclonal antibody cocktail.”

Dr Stella Immanuel, who went viral for advocating treating COVID-19 with hydroxychloroquine, offered Friday to prescribe her preferred treatment regimen to President Donald Trump if the doctors treating the First Family refuse to prescribe it.

“Everyone in the White House get on HCQ twice a month,” wrote Immanuel. “If your doctors will not prescribe it I will. I can see you via telehealth emergency licensed in DC.” She added, “POTUS, FLOTUS don’t wait to get sick.”

Immanuel reacted with anger after hearing about the president’s diagnosis. If he had continued to use hydroxychloroquine as a prophylactic, she argued, the COVID-19 test he took would never have come out as positive.