The Evolution of COVID-19 Propaganda: 1] The Repetitive Use of Deceptive Imagery, 2] Management of the News and 3] Lying About the Worth of PCR Test Kits

“I ate breakfast once with the president of a network news division (at CBS) and he told me that during non-election years, 70% of the advertising revenues for his news division come from pharmaceutical ads. And if you go on TV any night and watch the network news, you’ll see they become just a vehicle for selling pharmaceuticals. He also told me that he would fire a host who brought onto his station a guest who lost him a pharmaceutical account.” — Robert F. Kennedy Jr.

And here are some bits of wisdom from an esteemed virology researcher and pioneer in electron microscopy about a past heavily-propagandized pandemic:

“Since AIDS had become big business, the stocks of involved giant pharmaceutical companies could not be jeopardized! It had to be saved at all cost, even at the cost of trusting non-specific molecular markers… Fear is good business, and viruses generate fear most efficiently… So, the HIV flag had to be maximally agitated. In worldwide media outlets, with thousands of computer-generated, colorful caricatures of an idealistic retrovirus… By contrast, the media has been dominated by the most rigorous censorship when it comes to informing the public about the views of thinking dissidents. This total censorship put a safety lock on any information that could jeopardize the colossal…profits of the major pharmaceutical companies.” — Etienne De Harven, MD – Belgian pathologist and electron microscopist who published data refuting the alleged connection between the HIV virus and AIDS, instead logically attributing the disease to lifestyle and environmental factors

“Gallo, Fauci, and others…invented molecular markers to compensate for the missing HIV particles…This would have been acceptable if the specificity of these new molecular markers would have been clearly established. Unfortunately, this was not the case. The most misleading molecular marker was probably the first one, i.e. the reverse transcriptase (RT). Following Temin and Baltimore’s 1970 papers in ‘Science’, the RT enzymatic activity has been (deceptively) used as a specific retroviral marker.” – Etienne De Harven, MD 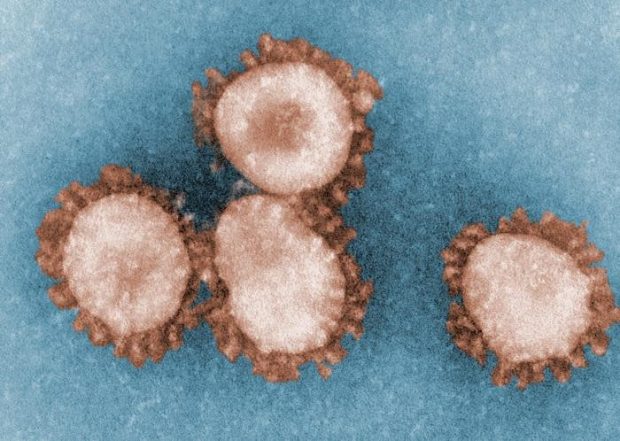 “This digitally colorized electron microscopic image (from 1975), depicts four human coronavirus particles, which are members of the Coronaviridae family. The outer membrane of each virus is derived from the host cell membrane. The coronavirus derives its name from the fact that under electron microscopic examination, each virion is surrounded by a corona or halo, due to the presence of “spikes” emanating from its proteinaceous envelope.” Photo source: https://phil.cdc.gov/Details.aspx?pid=15523

(GGK note: The CDC’s website contains no such images of SARS-CoV-2 viruses, substantiating the evidence that the virus that is allegedly causing COVID-19 in the United States has not yet been isolated from verifiably-infected patients; nor has the industry been able to successfully culture the SARS-CoV-2 virus in living cells – which is the usual first step in mass production of anti-viral vaccines.) 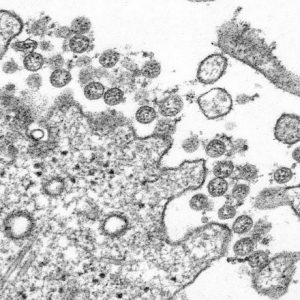 “Electron microscopic image of an isolate from the first U.S. case of COVID-19. The spherical extracellular viral particles contain cross-sections through the viral genome, seen as black dots.” https://phil.cdc.gov/Details.aspx?pid=23336

(GGK note: It may or may not be true that the viral particles in the photomicrograph are SARS-CoV-2 viruses. Given the fact that the photomicrograph is not at a high enough level of magnification to show the spikes of a coronavirus, these viruses may not even be coronaviruses at all. Interestingly, the CDC’s website does not currently have any digitally-enhanced, colorized electron microscopic photos of viruses like the one in the 1975 photos above.) 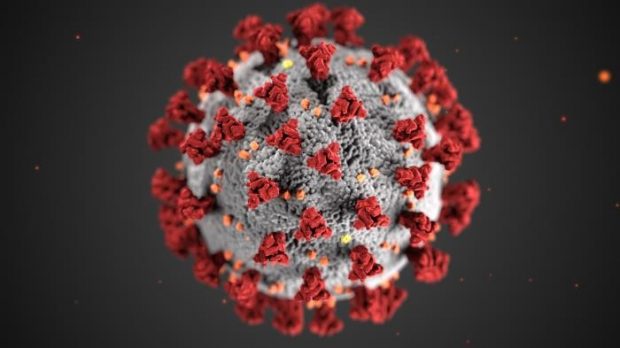 (GGK note: This now famous, totally imaginery, artist’s version of the SARS-CoV-2 virus was digitally-created by two artists (Alissa Eckert and Dan Higgins, neither likely to have much science background) who worked for the CDC. They were ordered by higher-ups to add to the planned CDC propaganda COVID-19 campaign in mid-January 2020 – within days of Chinese virologists claiming to have positively identified a “novel” coronavirus as the cause of the cluster of infections in Wuhan, China. The artists themselves chose – with official CDC approval – the color combinations for dramatic effect, even though anybody with any science background should know that viruses have no color.

“The idea that the Mickey Mouse test kits (which are being sent out to hospitals) can isolate a specific virus like COVID-19 is nonsense.”

The following is from a medical forum. The writer, who is a widely respected professional scientist in the US, prefers to stay anonymous, because presenting any narrative different than the official one can cause you a lot of stress in the toxic environment caused by the scam which surrounds COVID-19 these days. – Julian Rose

An Anonymous Nurse Speaks Out: The RT-PCR Test is Totally Unreliable, It Does not Detect the Virus.

Dr. Kohls [send him mail] is a retired physician from Duluth, MN, USA. In the decade prior to his retirement, he practiced what could best be described as “holistic (non-drug) and preventive mental health care”. Since his retirement, he has written a weekly column for the Duluth Reader, an alternative newsweekly magazine. His columns mostly deal with the dangers of American imperialism, friendly fascism, corporatism, militarism, racism, and the dangers of Big Pharma, psychiatric drugging, the over-vaccinating of children and other movements that threaten American democracy, civility, health and longevity and the future of the planet. Many of his columns are archived at Duluthreader.com, Globalresearch.ca or at Transcend.org.