Posted on October 3, 2020 by State of the Nation
US Senate 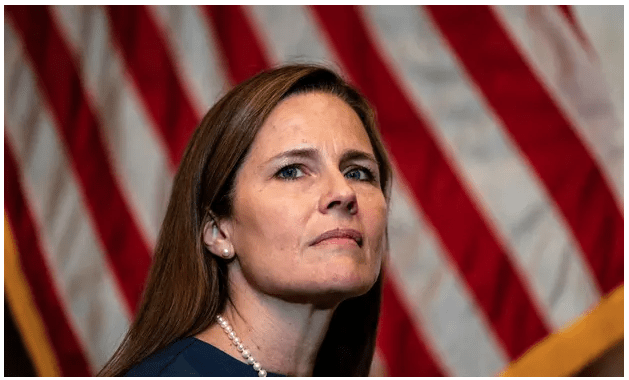 Emily Holden in Washington
The Guardian

Senate Republicans are facing a shrinking window of time before the November 3 election to confirm Donald Trump’s supreme court nominee Amy Coney Barrett, following the news that at least three Republican senators have tested positive for the coronavirus and more are quarantining after likely exposure.

Mitch McConnell, the Senate majority leader and Republican from Kentucky, on Saturday morning said he would seek consent from Democrats to cancel any action on the main floor of the Senate for the next two weeks, until 19 October.

But the Senate judiciary committee, which must vote on the nomination first, will still convene as planned on 12 October to begin the confirmation hearing process for Barrett, he said. While senators have attended recent hearings remotely, Democrats have said there is bipartisan opposition for allowing them to do so for something as high profile as a supreme court nomination that could determine the ideological tilt of the court.

In a letter on Saturday, top Democrats on the committee said that to “proceed at this juncture with a hearing to consider Judge Barrett’s nomination to the supreme court threatens the health and safety of all those who are called upon to do the work of this body”. Many of the senators on the committee are older and have other risk factors for Covid-19.

This despite refusing to consider Barack Obama’s pick for a supreme court justice in an election year in 2016.

Republican leaders are concerned that if they lose their majority in the Senate in the November election, and if Trump loses the White House, it will be harder to confirm a conservative nominee during the lame-duck session before former vice president Joe Biden could enter office in January 2021.

Utah senator Mike Lee and North Carolina senator Thom Tillis, both of whom sit on the judiciary panel, tested positive for Covid-19 on Friday and will quarantine for 10 days, until the committee meeting.

Both had attended an event at the White House announcing Barrett’s nomination last Saturday. Multiple attendees of the event, including Trump, his wife Melania, former White House counsel Kellyanne Conway and Chris Christie, the former New Jersey governor and a Trump adviser, have now tested positive.

Without Lee and Tillis’s votes, Barrett’s committee approval could be in jeopardy. Democrats could refuse to attend the meeting, denying Republicans the total number of lawmakers required to send the nomination to the full floor.

A third Republican senator on the committee, Iowa’s Chuck Grassley, who is 87, was also at a hearing last week with Lee. But Grassley’s office argues his doctors have not recommended he be tested and don’t believe he has been in close contact with anyone suspected of having or confirmed to have the coronavirus. At the hearings, senators sit far apart, although neither Grassley nor Lee wore a mask when speaking.

McConnell said the judiciary committee has been meeting since May with some senators present and some participating virtually.

“Certainly all Republican members of the committee will participate in these important hearings,” he said, of the supreme court confirmation process, which, if completed, would tilt the court dramatically to the right.

Wisconsin Republican senator Ron Johnson, who is not on the committee, has also contracted the coronavirus. He did not attend the White House event last Saturday because he was already isolating following a different potential exposure.

Senate Republicans meet several times a week for a caucus lunch, where they sit in a large room and remove their masks. All three of the senators who have tested positive were at those lunches last week, according to CNN.

If at least three Republican senators are too ill to appear in person to confirm Barrett, the party leadership may not have enough votes.

Republicans have a 53-47 majority in the Senate, and Mike Pence, the vice-president, could break a tie. Two Republicans, Maine’s Susan Collins and Alaska’s Lisa Murkowski, have said they will not confirm a nominee before the election.