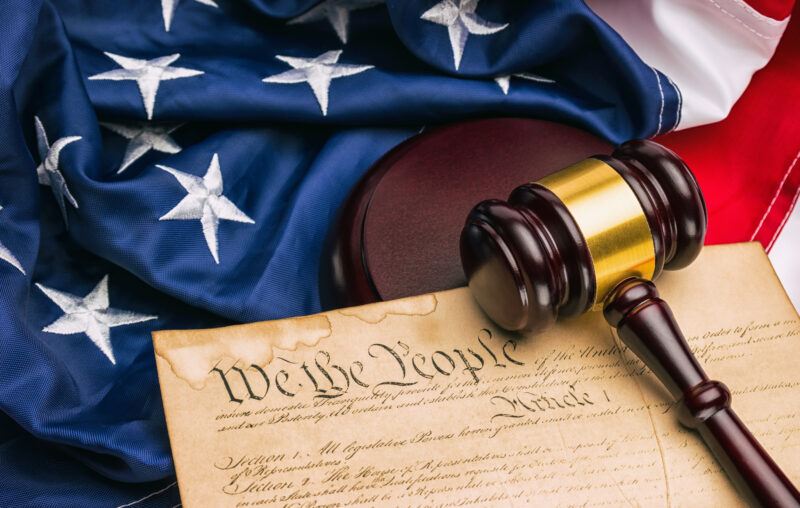 On October 3rd NPR reported that the Michigan Supreme Court struck down Governor Gretchen Whitmer’s state of emergency and the powers it granted. NPR writes

In a 4-3 majority opinion, the state’s high court said she did not have that authority. “We conclude that the Governor lacked the authority to declare a ‘state of emergency’ or a ‘state of disaster’ under the EMA after April 30, 2020, on the basis of the COVID-19 pandemic. Furthermore, we conclude that the EPGA is in violation of the Constitution of our state because it purports to delegate to the executive branch the legislative powers of state government– including its plenary police powers– and to allow the exercise of such powers indefinitely,” wrote Justice Stephen J. Markman on behalf of the majority.

Governor Whitmer has been one of the more heavy-handed executive figures during the pandemic. One of her policies went as far as to ban the selling of gardening supplies in stores that were still permitted to stay open.

More importantly, however, this court ruling was not the first of its kind but the third in a series of legal victories against lockdown orders. The first was a Wisconsin Supreme Court ruling that declared parts of Governor Tony Evers’ stay at home order unconstitutional and the second was by a federal court that struck down Governor Tom Wolf’s policies in Pennsylvania.

There is no doubt that the governors across the country have gone off the constitutional deep end in response to Covid-19, exercising powers that are not only unprecedented but unproven. These cases, notably in Michigan and Wisconsin, all share some important legal themes that may suggest the beginning of a constitutional reckoning for governors across America.

The Story in Michigan

Back in March, Governor Whitmer declared a state of emergency in response to the pandemic, much like many others across the country. Unlike many other governors, hers was particularly strict and arbitrary. The Mackinac Center Legal Foundation, an organization that represented a number of healthcare firms in a suit against the state write,

“One of the affected medical practices, Grand Health Partners, operates in the Grand Rapids area. It performs endoscopies and other elective surgeries, many of which were deemed nonessential by executive order. Due to the shutdown, many of their patients were not able to receive treatment and have suffered because of it.”

This is one of the many unintended consequences that come with policies such as stay at home orders and deeming certain businesses “nonessential.” Interestingly, this had little to do with the Michigan Supreme Court’s ruling. Such claims would be justified under the equal protection clause guaranteed by the 14th Amendment. However, the court decided to take a different route.

The court ruled that the governor lacked the very authority to continue her state of emergency. The Michigan legislature authorized the governor to declare a state of emergency in March but only until April 30. Governor Whitmer decided to invoke the Emergency Powers of the Governor Act (EPGA) of 1945 as well as the Emergency Management Act of 1976 to grant herself virtually unlimited power. This unilateral and unauthorized exercise of power without legislative oversight was what the court deemed unconstitutional.

The court not only struck down the governor’s emergency powers but it also declared the EPGA unconstitutional, albeit with a narrow margin. Record Eagle writes

“Although the constitutionality of the ’45 law produced a split ruling, the justices unanimously agreed that any orders past April 30 without input from the Legislature were not valid.”

Such a ruling is an absolutely necessary check on the powers of the executive branch by the judicial branch. The Michigan governor was essentially acting in contempt of the democratically elected legislature which did not grant her the power to continue her policies for as long as she did. Record Eagle writes,

“Our Constitution matters, and this was a big win for our democratic process,” said Republican House Speaker Lee Chatfield of Emmet County.

In a footnote to his opinion, Markman offered an optimistic message.

“Our decision leaves open many avenues for the governor and Legislature to work together to address this challenge and we hope that this will take place,” he said.

The Case of Wisconsin

The ruling in Wisconsin was one of if not the first that challenged lockdown orders enacted by state governors. Way back in May, the Milwaukee Journal Sentinel reported that

“The Wisconsin Supreme Court has struck down Gov. Tony Evers’ order shutting down daily life to limit the spread of coronavirus — marking the first time a statewide order of its kind has been knocked down by a court of last resort.”

The court took an angle similar to the Michigan Supreme Court in striking down parts of Wisconsin’s stay at home order because it was made without any legislative oversight. That is that lawmakers in the Wisconsin State Assembly did not grant the governor or his bureaucratic officers the power to enact lockdown policies.

“The Wisconsin Supreme Court’s decision should be seen as a victory for the principle that even in a crisis, the rulemakers must follow the rules. Regardless of how anyone feels about the orders themselves, if the governor and Health Secretary had worked with the legislature as they’re required to—even during crises—they could have crafted a constitutional law that the State Supreme Court likely would have upheld.”

They also explain that

“The Wisconsin Governor issued an order granting Department of Health Services Secretary-designee Andrea Palm nearly limitless power to respond to the crisis without any form of accountability. Even though Palm is not elected by the people and has not yet been confirmed by the state legislature, she was authorized to issue orders to shut down broad swaths of the state’s economy. And Palm’s orders could continue indefinitely without being subjected to public scrutiny. In other words, Palm’s authority violated key safeguards put in place to ensure that rulemakers remain accountable.”

The governor and his public health officials acted without the democratic consent of the people via their elected representatives in the legislature. Unilateral and quite frankly, rogue, actions such as this are a clear violation of the separation of powers doctrine that the Founders put in place to prevent tyranny.

The Case of Pennsylvania

AIER has already covered how a federal court held that Pennsylvania’s lockdown orders were unconstitutional in an article by Stacy Rudin. However, it is worth reiterating again because it is certainly an important case that differs from the rulings in Michigan and Wisconsin. Rudin gives some important context when she writes,

“Pennsylvania Federal Court in Butler County v. Wolf reviewed the indefinite “emergency” restrictions imposed by the executive branch of Pennsylvania government, declaring limitations on gathering size, “stay-at-home orders,” and mandatory business closures unconstitutional. Refusing to accept the alleged need for a “new normal,” the Court stated that an “independent judiciary [is needed] to serve as a check on the exercise of emergency government power.”

About time. The Judicial Branch is coming to save us.”

Pennsylvania implemented many of the lockdown measures that we see in the most draconian states such as stay at home orders and business closures. However, unlike Michigan and Wisconsin, Governor Wolf’s policies were struck down by a federal court, not a state court. Furthermore, the ruling was based not on a separation of powers argument but violations of the 1st and 14th Amendments, making it more of an individual rights case.

Another key component to the ruling was the fact that such orders were not narrowly tailored, which is a key criterion for any policy that intends to restrict individual rights.

“The fact that the governor’s orders allow people to visit malls, restaurants, and stores in greater numbers than what the state’s restrictions on gatherings permit showed that the latter were overly broad, (Judge William) Stickman wrote. His opinion also cites comments from Wolf’s chief of staff about how large protests—which the governor attended—didn’t lead to a “super spreader” event as evidence that restrictions on gatherings were overly broad.”

Such policies have no logical foundation and reek of political favoritism. The court upheld the fact that such practices have no place in America.

This country was built on fundamental rights and doctrines that were specifically crafted to prevent domestic tyranny, whether it be from the rule of the few or the mob. It may not be such hyperbole anymore to claim that governors across the United States have acted like tyrants.

In Michigan and Wisconsin, we have seen the affirmation of the separation of powers doctrine, which is an elementary school civics concept that forms the very foundation of a free society. There are three branches of government: the legislative, the executive, and the judicial. The legislative branch is a democratically elected and representative body that has the sole authority to write laws. The governor and the executive branch bureaucracy derive their powers from the legislative and their duty is to execute the mandate given to them by the legislature, not make up its own rules. Such a process may be cumbersome but in the end, it protects our liberty and ensures that the power wielded by government is accountable to the people. The governor is not representative of the people, just 50.1% of the vote.

Although we have seen the affirmation of these important constitutional rights and doctrines in these three states, it is clear that across the country there is much work to be done. What governors and mayors are getting away with violating the basic rights of their citizens? Has every executive officer acted with the powers granted to them by the legislature or are they acting as tyrants? Hopefully, these three rulings are just the first of many in what could become a constitutional landslide of justice.

Covid-19 will come and go as all pandemics do. However, if we do not resolve the fundamental questions that have arisen regarding our liberties and the power of government, they will haunt this republic till its final days, if you can even call it one at this point.