Here’s one of the key strategies of the communist plot to destroy the American Republic!

As Portland burns, why are so many people arrested in the riots being let off? It’s a recipe for carnage 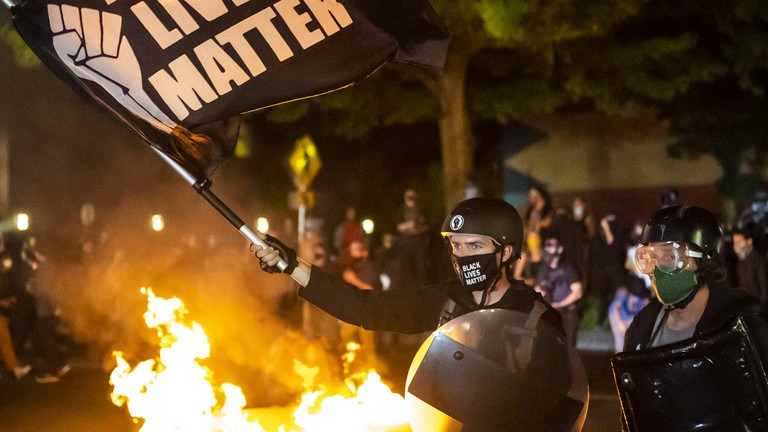 FILE PHOTO: Protesters gather in front of a fire near the North police precinct during a protest against racial injustice and police brutality on September 6, 2020 in Portland, Oregon © Getty Images / Nathan Howard

Micah Curtis is a game and tech journalist from the US. Aside from writing for RT, he hosts the podcast Micah and The Hatman, and is an independent comic book writer.

It was recently revealed that nearly 70 percent of people charged with crimes during the constant rioting in Portland have had their charges dropped. With no obvious deterrent, this is an open invitation for more rioting.

Of all the cities in the United States that have suffered rioting over the past few months, there isn’t one that has seen quite as much trouble as Portland, Oregon. The unrest in the city has stretched from the end of May all the way to this month. There doesn’t seem to be an end to it either.

Not long ago, there was an exposé by the New York Times that alleged that these rioters were even considering murdering police officers. There were also reports of them going to residential areas to terrorize citizens.

It’s a desperate state of affairs, but the one thing that could make things worse is for there to be a complete lack of accountability for this mayhem; for those who were arrested committing crimes to get a free pass.

Incredibly, though, that’s exactly what’s happening. The district attorney of Multnomah County, which is where Portland is located, has dropped nearly 70 percent of the charges levied against those who were arrested during the rioting. There have been 974 demonstration-related cases, with 273 classed as felonies. Of the total number of cases, 543 were rejected in the ‘interest of justice.’

One thing that is worth acknowledging is that some of the charges are not severe. According to Oregon law, some are as minor as ducking curfew or jaywalking. So it can at least be understood why the district attorney might simply wag his finger and say ‘don’t do it again’.

However, there is a chilling effect to this that isn’t being considered, and this is that there will more than likely be repeat offenders. With 50 of the people released being charged with a felony originally, there are obviously some people who are looking to do real damage within those cases that were dismissed.

It’s my personal opinion that the more severe the case, the more likely the perpetrator will be keen to try to wreck something again. And of course, those who obey the law expect the law to be enforced. This is simply common sense, so I wonder why the district attorney doesn’t have the sense to implement it?

During this whole mess, the US Attorney’s Office deputized several members of law enforcement in the area. This essentially means that the federal government can come in and prosecute if the situation calls for it. Portland Mayor Ted Wheeler actually pleaded for the government not to do so, only to be met with a resounding no. Obviously the mayor did not have the foresight to realize that allowing these situations to go on simply creates a feedback loop that encourages the behavior. Quite simply, the best way to get more riots is not to punish the rioters.

The lesson that needs to be learned here is the same one that applies to Chicago district attorney Kim Foxx. Being too relaxed when it comes to criminals only serves to create an environment in which they will thrive.

The message is simple. Do not take the consequence away. Or the next thing you know, your city could be constantly on fire for months on end.