Last week, the FBI says it foiled a plot to kidnap Michigan Governor Gretchen Whitmer (D), after the FBI infiltrated an anti-government militia and arrested 13 members who “talked about murdering ‘tyrants’ or ‘taking’ a sitting governor.”

And while the FBI never suggested a race-based ideology in its criminal complaint, the MSM – as well as Michigan Attorney General Dana Nessel (D), took the ‘white supremacist’ ball and ran with it – hard. 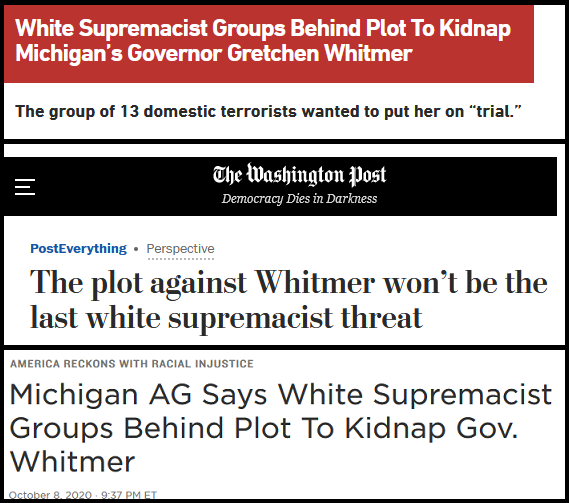 On Friday, however, the Washington Post profiled several members of the group. Notably absent were accusations of ‘white supremacy’ – perhaps after acknowledging:

“One of alleged plotters, 23-year-old Daniel Harris, attended a Black Lives Matter protest in June, telling the Oakland County Times he was upset about the killing of George Floyd and police violence.”

Another alleged plotter, Brandon Caserta, called President Trump a ‘tyrant’ – adding ‘Trump is not your friend, dude.‘ Caserta notably has an anarchist flag behind him in several videos he’s recorded.

Again, there isn’t a shred of evidence included in the FBI’s criminal complaint, nor subsequent reporting, that the men adhered to a white supremacist ideology – a false narrative.

And so, it appears that the FBI busted an anarchist, anti-government militia which plotted violence against elected officials – yet hated both sides of the aisle.