Not only is there a socialist coup unfolding in Canada, the taxpayers are paying for it.

There is a socialist coup unfolding in Canada, and we taxpayers are funding it

Under this socialist revolution, there is no need to confiscate your property — they can simply redistribute your wealth 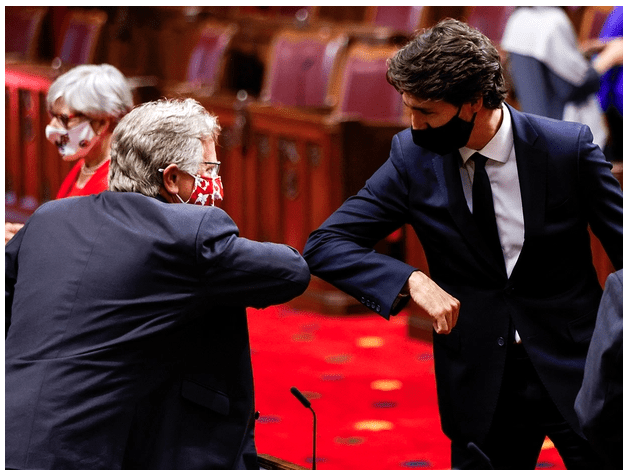 Prime Minister Justin Trudeau greets a Senator with an elbow-bump prior to the delivery of the throne speech in the Senate on Sept. 23, 2020. PHOTO BY BLAIR GABLE/REUTERS
Article Sidebar

Canada is quietly going through a socialist coup.

If I had written these words just one year ago, it would have been deemed conspiratorial. But I have heard from too many Canadians over the past six months about what they have seen taking place. Ever since Justin Trudeau tried to grant himself king-like powers at the beginning of the COVID crisis, what we have been witnessing in Canada is a socialist coup that we, the taxpayers, are funding.

Anyone holding out hope that they were wrong had the evidence laid out plainly in last week’s speech from the throne.

With a $343-billion deficit, Canada has started on a perpetual debt scheme reminiscent of Argentina. Even more concerning is that COVID relief has ballooned into non-health-related issues like favouring “green energy initiatives” (which are rarely actually green) over natural resource development.

The lack of transparency in government has raised concerns about unexplained inconsistencies, including: adding new rules that made it difficult for smaller retail and grocery stores to operate, but allowing larger outlets to function; cracking down on places of worship, but not on protesters; and limitations on family gatherings to which politicians don’t adhere.

All of these unanswered questions raise queries about the hidden agenda behind providing a guaranteed income of $24,000 per year to able-bodied, working-age Canadians, at an annual cost to the taxpayer of $464.5 billion. We’ve committed hundreds of millions of dollars to helping other countries fight COVID-19 while still having insufficient testing for Canadians; we still lack proper supports for small businesses and farmers to get through the pandemic; and we are essentially threatened that if we do not support the unjustified spending, all government support will disappear. 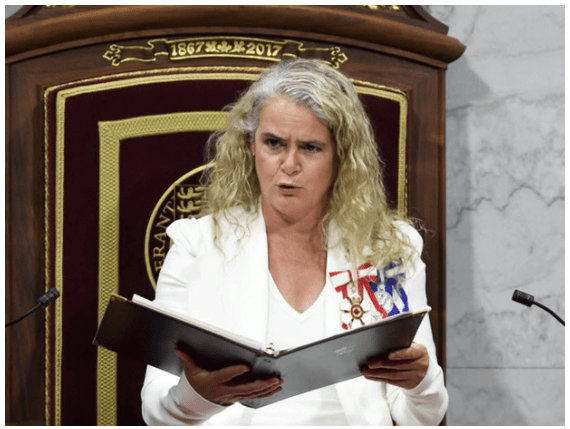 Trudeau has stated clearly that he wants Canada to be a “post-national” country. He is perceived as an evangelist for a new type of 21st-century socialism — a quiet and bloodless revolution that seeks to control our lives through economic dependency.

Under this socialist revolution, there is no need to confiscate your property — they can simply redistribute your wealth through a home equity tax, confiscate hunting firearms that were legally purchased and owned, increase a ubiquitous carbon tax, or even potentially confiscate a portion of your retirement savings through a new tax on the private sale of your home.

Many Canadians rightly fear the repercussions of Trudeau transforming Canada into a cashless society. They have told me that they are afraid the Liberals will impose a social credit score, similar to the one that exists in China where people’s behaviours are monitored through 5G cameras; for this reason, they also distrust the COVID Alert app.

The truth is maybe more insidious

But, the truth is maybe more insidious. There is no need for an official social credit score when the government is already picking and choosing which businesses can be open and which ones can’t, and which jobs are essential.

Looking back on the Canada Summer Jobs debacle we see the Liberals had already taken their first shot at controlling who was worthy of government support based on personal beliefs. They simply hide behind government bureaucracy to do it. They have made it plain that they believe those same beliefs make people unfit to serve in public office, become judges or hold any position of influence in society.

Canadians rightly fear that this authoritarian socialist agenda will be so insidious, there will be no need to throw dissenters in jail because new societal protocols can be put in place and those who fail to obey the ever-changing societal “norms” can simply be fined or jailed for minor infractions. Every socialist state has two sets of rules — one for those connected with politicians and bureaucrats, and another for the ordinary person. The fear is that Canada will be no different: recently we have seen politicians engage in significant conflicts of interest, only to receive small fines or slaps on the wrist. Meanwhile, average citizens potentially face steep fines for hosting a dinner party or spending time with their child in a park. The health minister, for goodness sake, was telling Canadians not to travel while racking up frequent flyer points.

You’re probably hoping for some good news at the end of this piece, and here it is: we are the good news, and we still have a democracy. For Trudeau to remake Canada into a socialist state, he will have to go through us first. He cannot do that if we get engaged, vote and volunteer.