New Yorkers, do you not yet understand! Your Criminal Politicians and Corrupt Government Officials have forever destroyed your city!

How to kill a thriving metropolis in 7 months: NYC’s Covid-19 failure is a vicious spiral directed by a sadistic political regime 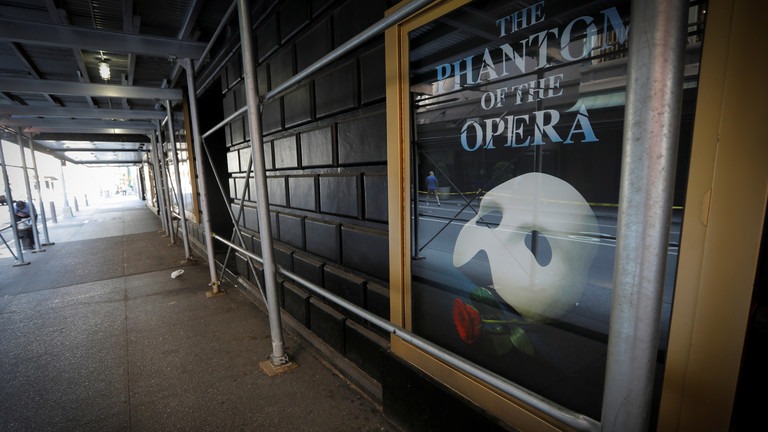 Seven months into the pandemic, as many US states inch back toward ‘normal’, New York is in the grips of a crime wave, reinvigorated lockdowns, and widespread fear of pretty much everything. Thank local government.

New York City has lost billions of dollars in tax revenues on tourism, music, art, theatre, restaurant dining, and everything else that once fueled its mammoth economy over the seven-month Covid-19 pandemic shutdown. It’s in worse shape than most US states, and unlike many others, its continued misfortunes are largely of its own making.

The shuttering of the city’s iconic Broadway theaters alone has sent hundreds of thousands out of work and signaled to both wealthy city inhabitants and out-of-town visitors that their cash is better spent elsewhere. Theaters announced just weeks ago that performances would be cancelled through March 2021, and the Metropolitan Opera House canceled its entire season through 2021.

New York’s famed restaurant scene isn’t faring any better. The ‘lucky’ establishments are finally – as of two weeks ago – allowed to operate at 1/4 capacity indoors, which given the amount of money they’ve lost over the last 6 months is a band-aid on a cannonball wound. The unlucky ones in New York Governor Cuomo’s newly-invoked ‘red zones’ must continue to seat patrons outdoors in the freezing cold as summer gives way to a damp, chilly autumn. To make matters worse, there’s no Thanksgiving parade, no Black Friday shopping, no fun allowed.

Perhaps pandemic-fearing wealthy New Yorkers would have left anyway, taking their tax dollars with them. But tourism might have filled some of the gap. What city in its right mind would turn up its nose at $11.5 billion, the estimated total spent by out-of-town visitors to the city’s famed theatrical productions alone? Why leave that money on the table, especially when the virus that had held the industry hostage for months has been steadily on the wane? With Governor Cuomo demanding billions in relief from the federal government to make up an economic shortfall that stems from his own policies, surely he can’t afford to keep the state (and its largest city)’s biggest draws closed down indefinitely?

Pleas to cancel rent have fallen on deaf ears, and starving artists’ efforts at workarounds have been squashed. Cuomo even passed an executive order in August – with the coronavirus “peak” safely receding in the rearview mirror – to ban ticketed live performances, and has revoked liquor licenses from bars that failed to serve food with their takeaway drinks. Is it any wonder the city is hemorrhaging cash, as well as the creative and interesting people who put it on the map?

To understand the motivation someone like Cuomo could have for destroying the city whose economy once kept his state alive, it helps to grasp the concept of the “self-licking ice-cream cone,” a phrase that has been attributed to NASA scientists but can in general describe any system that exists for little reason other than to continually justify its own existence.

Every politician who’s ever harbored dreams of becoming a totalitarian dictator has embraced the directive “never let a crisis go to waste,” and both Cuomo and NYC mayor Bill de Blasio are true believers. After attaining unprecedented powers through the emergency measures passed under cover of Covid-19, they aren’t about to let them go quietly, and have seemingly set up a perpetual motion machine of crisis that – accidentally or otherwise – ensures NYC will remain forever financially in the hole. The type of cash lifelines that might get the city back on its feet – as a post-9/11 tourism blitz did – are blocked (no one’s going to visit a New York where dancing, drinking, and taking in a show are off-limits). Average New Yorkers, too, are paralyzed by the thought of the scary virus lurking just outside their door, ultimately learning to love their captors, Stockholm-Syndrome-style – if this month’s fawning New Yorker profile of Cuomo is any indication.

With the virus no longer nearly as much of a danger as it was back in April, the would-be dictators have put together what looks for all the world like a diabolical plan to empty out the city and take advantage of artificially-lowered property values.

First, the criminals are unleashed. Bogged down with a directive to enforce the ever-growing range of social-distancing and mask-related offenses, New York’s police are no match for the flood of actual criminals released into the streets under statewide “bail reform” that all but guarantees the “catch and release” of muggers, rioters, and other criminals whose offenses stop short of rape and murder. Even more miscreants have been paroled early due to Covid-19-related overcrowding excuses.

Next, the threats are broadcast 24/7 over every media outlet. CCTV videos of horrific, unprovoked attacks on old women, small children, everyday middle-aged types, a jazz pianist, a would-be rape victim on a subway platform – the point is made that everyone is a potential victim. The solution is presented as a paradox: do New Yorkers who’ve just spent months demanding the city rein in its police want more cops patrolling the streets? Surely that’s not very “woke” of them. While they hem and haw, the rampage continues, and the debate ends with helpless, fear-crazed city dwellers throwing up their hands and begging Cuomo and de Blasio to Do Something, Anything, to Make the Bad Men Stop. Both men play dumb – there’s nothing they can do! Better get used to crime, or flee!

TERROR IN THE TUNNELS

The plight of the subway is instructive. The city’s legendary 24-hour train system was ordered to close down service from 1am to 5am back in May, ostensibly for “cleaning” because of the virus. The homeless people who’d taken to sleeping on the cars in the wee hours were a health risk, New Yorkers were told, and the city promised free transit alternatives for those whose jobs required them to be able to move around during those times (promises which in many cases did not materialize). Ridership, already severely curtailed due to pandemic fears, was down 90 percent at one point, sending the already cash-strapped system deep into the red.

Now, we’re told, the lack of people (and cops) on the subway has made it a predator’s playground. The lack of witnesses makes it easy for unscrupulous crooks to nab a wallet, attack an innocent commuter, and otherwise strike fear into the hearts of those New Yorkers who still think there’s a future for their city. “We need more cops!” the law and order types cry, only to find the MTA is deeper in the financial hole than ever and de Blasio is leery of upping the police budget. Presumably, the next move will be to decrease operating hours still further, guaranteeing the downward spiral continues indefinitely.

A tourism and entertainment-based city without so much as a public transit system is, quite simply, doomed. The only question, then, is why are de Blasio and Cuomo so determined to run New York into the ground?

Cuomo’s “economic reopening council” is guided by private equity partners who actually make their profits off the carcasses of dead and dying businesses, so it’s no mystery why he’s eager to see restaurants and theaters crash and burn. Private equity stands to make billions on all the vacant office space and abandoned properties from city institutions forced to pull up stakes. If Cuomo does what his deep-pocketed donors tell him – he’s not called “Governor 1 Percent” by progressives for nothing – he might even get that rumored Attorney General spot he’s being reportedly considered for in a Democratic Joe Biden administration. And perhaps de Blasio – despite never polling above 0.1 percent during the 2020 primaries – actually thinks he has a shot at the governor role.

Better to reign in hell than to serve in heaven, as the saying goes.