One year before Jim Comey was immersed in his plot to overthrow Donald Trump, the duly elected President of the United States, a brave Foreign Service Officer at the U.S. Department of State came forward with firsthand information of Hillary Clinton’s rampant abuse of Classified material. The man, a senior State Department diplomat who had served as the acting Ambassador (Chargé d’Affaires) in the Asia Pacific region under President Clinton, also was a veteran of the U.S. Army during the Vietnam War.

The letter from this whistleblower is stunning and I am going to present it in total. It is dated 10 January 2016. You can read it for yourself here starting at page 121. I became aware of this letter thanks to the assiduous research and writings of Charles Ortel (he wrote about this recently at the American Thinker).

The letter explains in great detail how Hillary and her cabal of sychophants used an unclassified system to disseminate Top Secret and Secret intelligence. But the Senior Diplomat did not stop there. He explained carefully and specifically who the FBI needed to interview and the questions they needed to ask. You do not need to take my word for it. You can read the letter for yourself…

And what did the sanctimonious, smug buffoon heading up the FBI do? Nothing. But this senior Foreign Service Officer was dogged in making sure the FBI had the information. He called FBI Headquarters and could not get any confirmation that his letter was accepted. Not satisfied, he walked into the FBI’s Washington Field Office. The results of this meeting were reported to three FBI Agents working on the Hillary Clinton investigation. Named in the report are Peter Strzok and Jonathan Moffa (the third name is blacked out).

Here is the report in its entirety. Please note that the State Department official delivered the information on the 27th of January 2016, but the report was not written up until four weeks later–22 February 2016. (You can see the original on the FBI website here starting at page 11.) 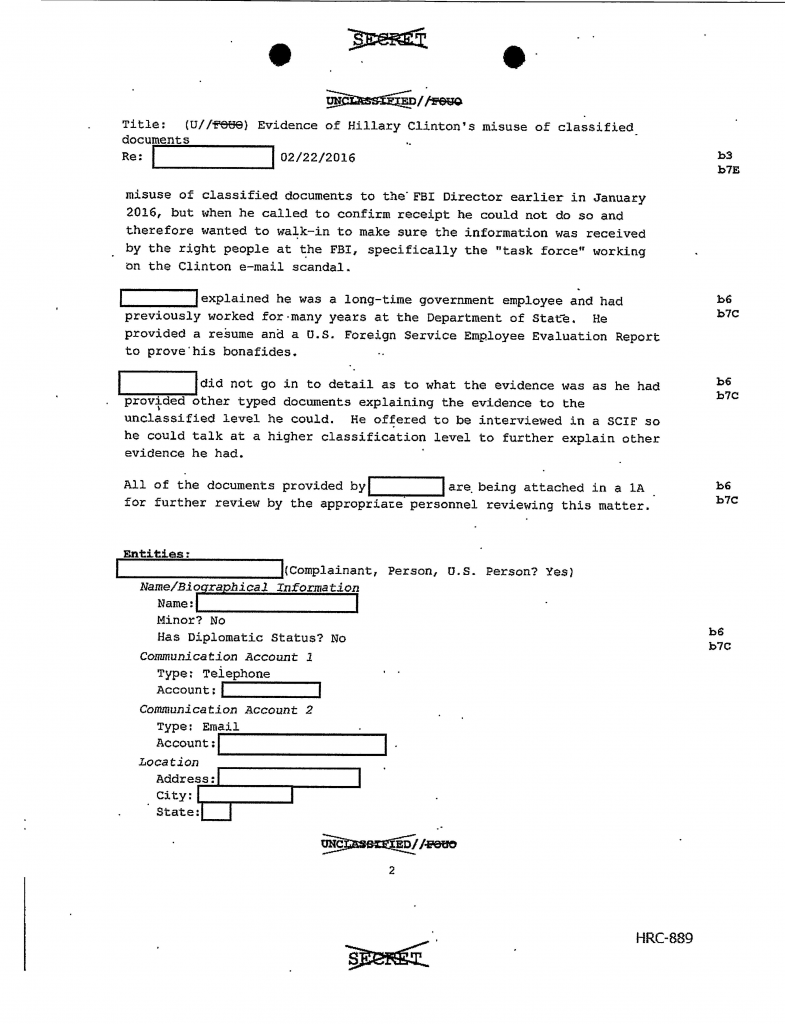 I do not know if John Durham has seen these documents. I am posting to make sure that he does. There is no evidence that Inspector General Horowitz examined these documents or interviewed the Foreign Service Officer.

With Secretary of State Pompeo’s promise that Hillary emails will be forthcoming, I think it is worthwhile to revisit what this brave whistleblower tried to bring to the attention of the FBI, who clearly was hellbent on protecting Hillary rather than pursing justice and upholding the law.