OBAMAgate: The Gobalists Have Done So Much to Protect Obama They Have Committed One Major Crime Spree After Another 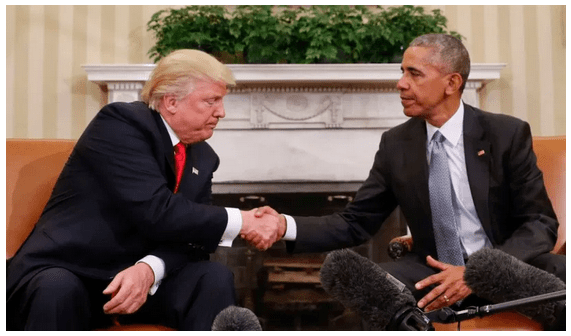 Back during the early days of the Democratic primaries I told you that the real story behind the scenes was a three-sided civil war for control of the DNC.

Not quite an equilateral triangle, the two major factions were the Clintons and the Obamas with the Soros-backed squad pushing them both farther and farther left, through the fake Progressivism of Bernie Sanders and Elizabeth Warren.

And with the ascension of Joe Biden as the candidate, triumphing over the inept Hillary-backed challenge from Mini Mike Bloomberg, it was clear that the Obamas won the internal battle.

Hillary eventually bent the knee and endorsed Biden along with everyone else.

After her failure to beat Trump in 2016 it became clear that Obama was the choice by The Davos Crowd to deliver the U.S. into their hands weak, divided, literally on fire and close to irretrievably insane.

In the words of Bush the Lesser, “Mission Accomplished.”

But what’s been sticking in the back of my mind for months was Trump’s tweet from May:

That was the rallying cry from him to repurpose his base’s energy towards the real villain in the RussiaGate story, Obama.

And what’s really clear now with the latest set of releases — specifically Former CIA Director John Brennan’s handwritten notes on a CIA memo — is that Obama directed his people to point all the fingers at Hillary for RussiaGate’s worst abuses while keeping Obama neatly above it all.

Just the amount of this document that has been redacted is itself an affront to the idea of government transparency and a free society.

These people work for us and their activities in this affair, at this stage, have no need to be redacted if they exonerate the President of any wrongdoing and implicate a former President in any.

What this release indicates is that Obama clearly knew what was going on and gave his blessing to it. As Alex and Alex at The Duran put it so well in a recent video, Obama saw the opportunity to take out both Hillary and Trump.

This conclusion tracks with the speed at which Hillary switched from “I’m in this race,” to “I’m here if you need me,” to “I back Joe wholeheartedly,” culminating in a desperate screed that had even Bill looking for the off-ramp.

She’s desperate for a Biden win simply to keep herself out of jail as I’m sure that’s part of the deal she made with Obama in stepping aside as the leader of the DNC.

Remember, it never sat well with Obama that Hillary ran the DNC while he was President. Since, as President, he was supposed to be the leader of the party. But he clearly wasn’t and she treated him as little more than a placeholder for her eventual coronation.

Obama outplayed Hillary and nearly got Trump ensnared in his game at the same time, using Hillary’s avarice against her. But Trump is too disagreeable for this to have worked.

Pat Buchanan noted at the beginning of Trump’s presidency that he would not stand aside like Richard Nixon did ‘for the good of the country.’ Trump, rightly, stood his ground against Obama ‘for the good of the country’ forcing Obama and his minions to grandstand and obfuscate the truth through a complicit quisling media hoping to avoid the consequences and regain control over the White House.

And for four years we have watched a systematic stonewall go up protecting Obama at every turn while grinding the efforts of the Trump administration to a halt.

How else do you explain the behavior of Judge Emmit Sullivan in the Michael Flynn case? Or the bombshell that CIA Director Gina Haspel is the one personally holding the line on connecting the dots of the FBI’s extracurricular activities in setting up Carter Page which formed the basis for the FISA warrants for surveillance of the Trump transition team?

All of this was done to run out the clock in the hopes of deposing Trump and sweeping all of this malfeasance under the rug.

They’ve nearly gotten away with it. We’re less than 30 days to the election and nothing of substance has happened even though it’s all there in the open for everyone to see.

The problem for Obama and all of his underlings is that Trump is going to cruise to re-election next month and it’s clear from the way the Democrats are acting they know this to be true.

Obama has been protected by the highest level of the global oligarchy, using the Coronapocalypse to accelerate their plans for The Great Reset.

The obstruction has come from all the predictable sources — members of Trump’s cabinet who have worked overtime to keep him looking weak howling about collusion while they’re the ones keeping the lid on the entire mess since many of them are implicated.

Moreover, the Swamp collapsed to protect its own, refusing to give Trump any real options for cabinet picks who would carry the ball forward and issue indictments.

We all wondered why clearly horrible people like Haspel, John Bolton and Mike Pompeo were put in place around him when there were dozens of better options available.

It was to ensure that only the illusion of an investigation, the illusion of policy change could take place while not actually getting anything of substance accomplished.

And now that it’s crunch time William Barr is showing his true colors, slow-walking the indictments that should be coming to the point where he’s covering his ass in case Trump loses next month.

This is why Pelosi and company are now preparing a 25th amendment committee to “help” the Cabinet and the Vice-President make the right decision about protecting the continuity of our systemically rotten government.

Translation: Even if Trump wins the pressure will be on them to remove him from office to finish the coup that began in the summer of 2016 even before the thought of Trump winning was taken seriously by all but the most politically savvy analysts.

Maybe this is all just an elaborate sting operation that Barr has in motion? Maybe. Wake me when that dream comes true at this point.

We all know the saying, when you go after the king you only get one shot. Well, they’ve gotten multiple chances to take down Trump and he’s still standing.

So, he’s clearly not king, Obama is. But time is short, recourse options thin and the end of this pathetic period of U.S. history rests fully on the length of Trump’s coattails in an election that is sure to be even more corrupt than the four years of maneuvering that preceded it.