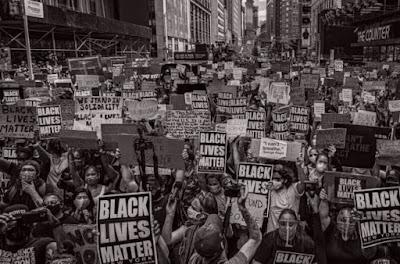 By Susan Duclos – All News PipeLine

One would think with the pandemic, the projections of election night chaos as a result of an unprecedented and inordinate amount of mail-in votes, which has already been deemed too much to count by the end of election night, that folks would just want the night over with and the final result announced as soon as possible in order to get back to the “normal” left against right attacks and rioting.

One would be wrong to think that as we now see groups are preparing for election night protests, uprisings, resistance and mass ‘direct action,’ with others “forming community watch groups, others are working on conflict de-escalation and still others are purchasing guns,” to protect against any violent rioters and protesters.

For Americans like financial adviser David Powell, the greatest worry is that they could be forced to take sides to protect civil rights, private property and even lives.

“I’m not part of any group, don’t want to be part of a group, I’m your regular guy who is watching the news and is getting really concerned,” said Powell, 64, of Raleigh, North Carolina. He said he worries about “antifa thugs,” a term U.S. conservatives use to describe left-wing anti-fascist activists. He said he is prepared to “stand guard” in his community, if necessary.

Not all of those preparing for violence are planning to commit violence themselves unless they need to in self-defense or defense of others caught up in the chaos.

Others claim they want “non-violent” revolution, at least publicly, yet are calling for actions that do not sound at all peaceful, and given the recent history of groups calling for “direct action,” starting riots, burning buildings, looting, toppling statues and more, we tend to trust their actions far more than their words and claims.

As an example we look to Portland where the most recent call for ‘direct action’ escalated Portland protest destruction.

As people reached a statue of President Theodore Roosevelt on horseback in front of the Portland Art Museum, a person on a megaphone announced they had arrived at their destination.

Several in the crowd started to affix chains and straps to the Roosevelt statue, a bronze sculpture officially titled “Theodore Roosevelt, Rough Rider,” as others took a blowtorch to its base and splattered it with red paint.

They began to pull until the statue rocked from side to side before falling down at 8:51 p.m. Protesters erupted in cheers as dance music played on a large portable speaker.

The crowd then set its sights on an Abraham Lincoln statue a block away, toppling it minutes later.

Afterward, some protesters began smashing windows at the Oregon Historical Society while others unfurled a banner that read, “Stop honoring racist colonizer murderers.” Flares were also thrown into the building’s lobby though they quickly extinguished, police later said.

A mural on the attached Sovereign Hotel building depicting the Lewis & Clark expedition was splattered with red paint.

Over the next half-hour demonstrators used batons, bicycle locks and other objects to shatter windows at Portland State University and along a seven-block stretch of Southwest Fifth Avenue.

Police said one person fired two bullets into the front windows of an empty restaurant on Southwest Park Avenue.

Read the rest at Oregon live. 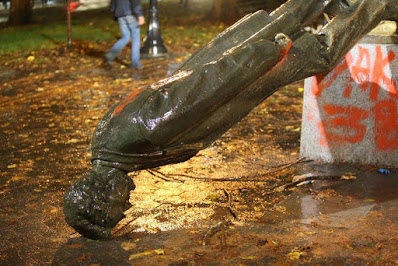 Via Breitbart we see reports of actions being planned by the group ShutDownDC, which assumes that if Donald Trump wins reelection, even if outside sources call it for him, the result would be “illegitimate,”  and a “coup,” and plans are being made to shut down the country and force President Trump from office.

They uploaded a 38 page document to Google docs (found here) meant as a guide on how to accomplish their goals, which includes “uprisings, resistance and mass direct action.”

The publicly available guide claims that “It does not encourage or endorse bringing harm to any living thing,” yet throughout the document and the actions suggested certainly are not harmless.

Parts of the guide are committed to ensuring a “fair election.” Parts of it, however, read like a manual for staging a coup rather than a guide to preventing one:

In the context of a coup or highly contested election we need to be clear that our actions must directly affect the structures and pillars of power.  Our largest asset in this regard utilizes the ideas of non-compliance through massive, broad based direct action.  Where we can, we need to be in the streets, on the highways, or at the sites of power and power holders. In our jobs and lives we must refuse to allow those taking control the legitimacy of the power they seek through strikes, slowdowns, and boycotts, and public refusal to accept an illegitimate ruling party.

Another section urges activists to stop American life from continuing if the election does not go their way (original emphasis):

In order to really win we will need to force some pillars of power (business, military, media, or other major institutions) to decide to side with the people, or at least get out of the way.  If everyday life goes on, a despot will not leave power, and so there will be no incentive for real systems change. You want to think about what it might take to stop business-as-usual.

While Breitbart covers the manual/guide, a look at the ShutDownDC website gives us clear indicators of what is planned for election night.

Under the Election 2020 tab, it states “November 3rd. After You Vote, Hit the Streets!  – We can’t anticipate exactly how Trump and his enablers will try to attack democracy (although we have been gaming out a number of different scenarios), but we know that the stakes are too high to sit on the sidelines and wait. That’s why we’re making plans to be in the streets before the polls even close, ready to adapt and respond to whatever comes our way.”

Under that same tab it gives instructions for those that are not in DC, stating “Be ready to block a highway (or all the highways in your town), shut down a port, occupy your state capitol, do whatever it takes! We hope to be able to offer trainings and support to groups outside DC that share our principles.” 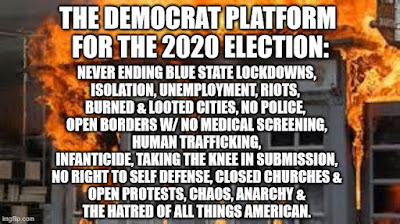 OTHERS CONCERNED ABOUT ELECTION NIGHT CHAOS

We aren’t the only ones noting the probability of election night chaos, with more than just the actual vote, but violence and protests before, during and after the vote as well.

To police the expected protests, the department will require most cops to report for duty in uniform and “be prepared for deployment” starting Oct. 25, the memo states.

“Accordingly, we should anticipate and prepare for protests growing in size, frequency, and intensity leading up to the election and likely into the year 2021,” it adds.

Similar preparations are being made in other cities and states across the nation as we get closer to election day.

If the aftermath of the 2016 election is anything to go by, especially after fours years of media hate, liberal lies and the Russian Collusion Hoax all failing to overturn the 2016 election results, we can expect to see the unraveling of already unhinged liberals should President Trump win reelection.

Video below published by Oregon Live on October 12, 2020.